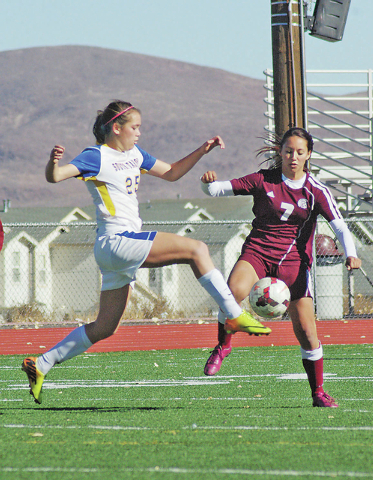 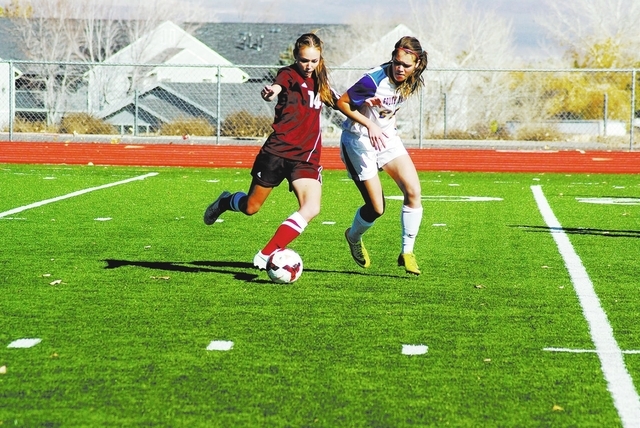 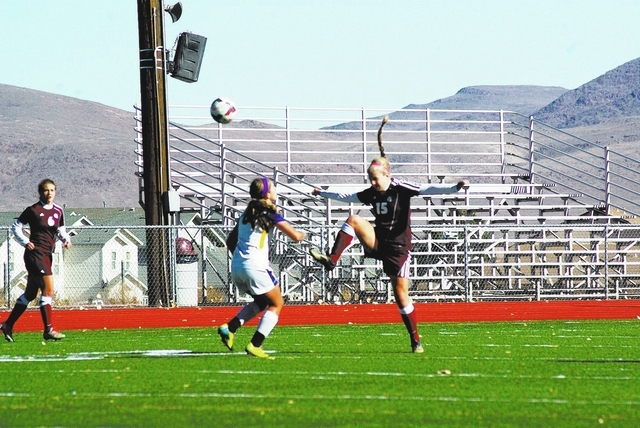 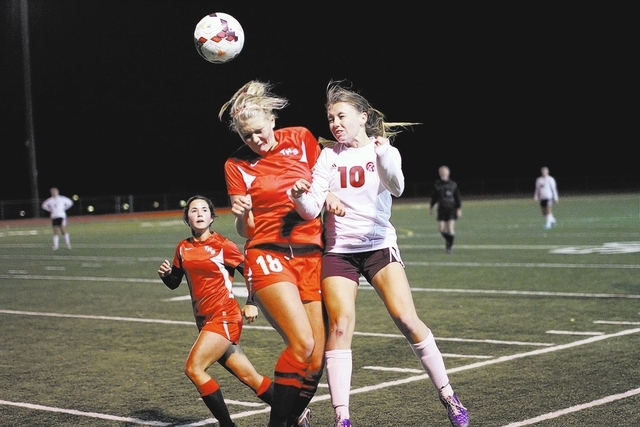 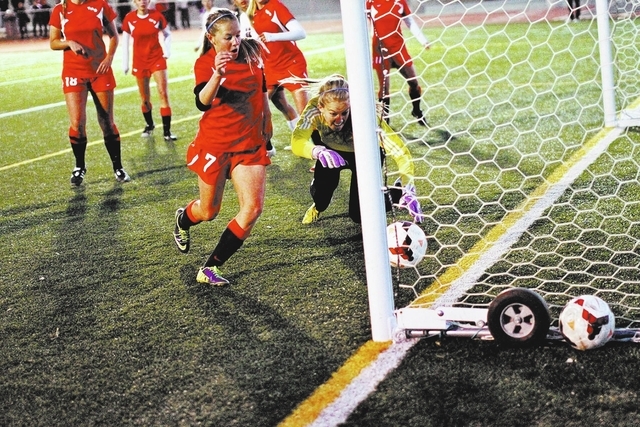 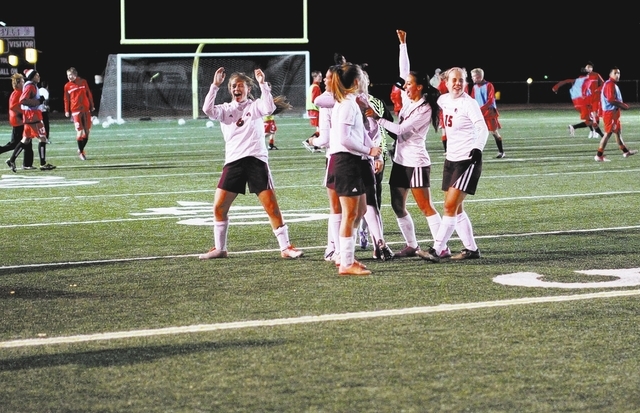 Two titans in prep soccer came together on Saturday in Dayton, a small town near Carson City for the Division 1-A Nevada State Women’s Soccer Title.

The game conditions were far from perfect with fierce cold wind and 40 degree temperatures. The wind favored the Trojans during the first half of play, and they had to fight the wind in the second half.

During the first half, the two teams slugged it out with the ball going back and forth with neither team showing any signs of giving in.

Each team had to pull players off the field for injuries in the first half. For the Trojans, it was Jennifer McCaw who hit the ground hard and the referee had to call a time out for the coaches to evaluate her. She returned to the game moments later.

A defender for the Vikings, Jensen Smith came out briefly complaining she could not run. She had a taped up leg and apparently it was bothering her. She would return to the game to make a penalty kick on the Trojans in the second half.

Vikings Coach Jeremy Evans said, “I felt if we could keep Pahrump from scoring during the first half we would win the game.”

Tahoe drew first blood in the first two minutes of the second half. The Vikings were able to get behind the Trojans defense with their speed up front. This is something that rarely happened because of the speed of Lexi Smith and the rest of the Pahrump defense.

They got another goal on a corner kick about 26 minutes through the second half. This seemed to be a play right out of the Trojans play book with a Viking heading the ball in for the goal. The ball seemed to go right past Trojans goalkeeper Kiya Nauck.

With two unanswered points the Lady Trojans finally responded with Sydney Sladek. She penetrated through the Tahoe stiff defense and got the goalkeeper to charge her. It was as if the Viking goalie forgot who Sladek was for she raced out to challenge her and left the goal unattended. This may have worked for other teams, but for Sladek this was exactly what she wanted. She was one-on-one with her and no goalkeeper wins with Sladek in that situation and she punched it in with 25 minutes on the clock, 2-1. There was still plenty of clock for the Lady Trojans to come back. It was just a one-point deficit and Trojans fans knew that one point never held the Trojans.

Ten minutes expired and still there was no progress for the Trojans.

At that point the Pahrump knew they had to hold the Vikings, but with just 16 minutes left to go on the clock the Vikings delivered the death blow on a penalty kick by Smith and this made the game 3-1.

With time ticking off this made it even harder for the Trojans to mount a comeback. The girls tried numerous times in the waning minutes to punch it in, but the defense was too tough. They never gave up though and with just seconds left to go they made their final goal, which made it 3-2. Just seconds after the goal the ref blew the final whistle.

The Trojans fans were in disbelief after the last score and the time ran out. It was a sad ending to near perfect season, but the girls have to be proud of what they accomplished.

On the other side of the field, the Vikings were triumphant, but showed a lot of class. The two teams shook hands and the Viking coach had nothing but praise for the Trojans. He had a lot of respect for Pahrump.

Evans said it was a sweet victory for his girls because they remembered the 8-3 beating the Trojans gave them last year in the state semifinals.

“Honestly the girls remembered last year’s state semifinals. For a whole year they were kind of angry and wanted another shot at it, but as far as this game we knew we had to keep Sydney in front. You can’t let her behind you and other than once or twice we didn’t. We knew if we kept her in front of us and kept her going to the sideline we would have a chance. Can you ever stop a girl like that? No, we never were going to stop her, but we stopped her enough times,” he said.

Vikings player Allison King was excited after the game.

“Definitely we stepped it up and played as a team. At the beginning of the year, we were not really playing as a team. We just snapped out of it and played as a team and kept it positive. We never saw this day coming after last year’s loss to Pahrump. We pulled it together this year and stayed positive as a team,” she said.

Evans also said the team prepared for the game against Faith and the Trojans by carefully scouting the Trojans and watching game film from the Faith/Pahrump game.

“I asked Steve (The Faith Lutheran head coach) down there from Faith Lutheran to send me a tape of Pahrump and Faith and we watched it. We had some scouting reports too. We scored 40 seconds into the game against Faith and got another one in the second half and they got a pk. It was 2-0 during the whole game. Our defense was our strength the whole year. We have only given up 15 goals and not many teams have gotten behind us and scored. That was a major factor the first half. To get that goal the second half boosted the girls and I knew the wind was coming. We played with a ton of confidence and it got a little ugly the second half,” Evans said.

“I am proud of the dedication and motivation that this team had this year. It has been an incredible journey. The girls have invested hours upon hours to perfect their game, they have had to arrange homework and social lives around this game and they have done it with very little grumbling. They can hold their heads up knowing that they have an unequaled record in girls’ soccer in this valley. They have set the bar very high indeed. I look forward to next season with the girls and in rebuilding our great team with the new girls that will be coming up from RCMS, we welcome them. For our seven seniors that will be leaving, I know that the determination and discipline that they have shown on and off the field these last four years will take them wherever they want to go, and I know that their goals will be high,” she said.

The team graduates seven seniors and all of them will be going to college. At least four will be playing soccer for other teams next year.