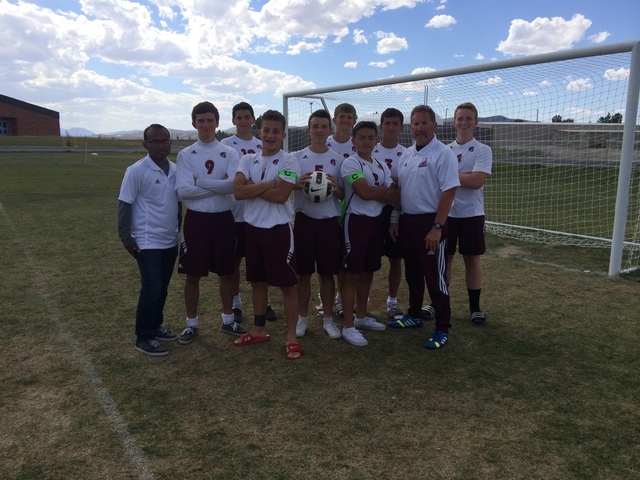 Trojans boys had a rough opening at the Mesquite Cup winning only 1-2 last week. The team turned it around over the weekend by beating Fernley 5-2 and Churchill County 2-1. The team played the Idaho State Champions on Saturday to a 3-3 tie and improved their record to 3-2-1.

Last year the Trojans finished 7-10 in conference play and hope to improve on this record this season.

Trojans Coach Don Boulden said he was happy with the way his team played up north at the Spring Creek Jamboree. “We really didn’t know anything about these teams and then we played Jerome, Idaho in the third game. We played them when we were the weakest and found out they were the Idaho State Champions. We had our opportunities and maybe should have won that game. We came back proud of what we accomplished. We just did what we had to do and are glad the way it came out knowing it will affect our standings,” Boulden said.

The Trojans have some positions already decided. Victor Gomez will be the starting goalkeeper. “Originally I was concerned about our depth at this position but now we are fine and have a lot of depth at this position. I have three additional backups, Kenyan McCray, Daniel Clasen and Spencer Dykstra,” the coach said.

According to Boulden, the defense is not quite final. “I have sweeper open at the moment. Our midfield is pretty solid. I have Aaron on the left. I have Jose Nunez in the center and Kevin Pereira who has grown a lot since last year. He has proven to be a force on the field. We are using Adrian Maldonado as striker because of his finishing ability. I can also use Nolan Toomer, Nick Nelson and Josh Mortensen to score also,” he said.

The Trojans will play Mojave on Wednesday on the road and then play Clark at home on Friday at 3:00 p.m.