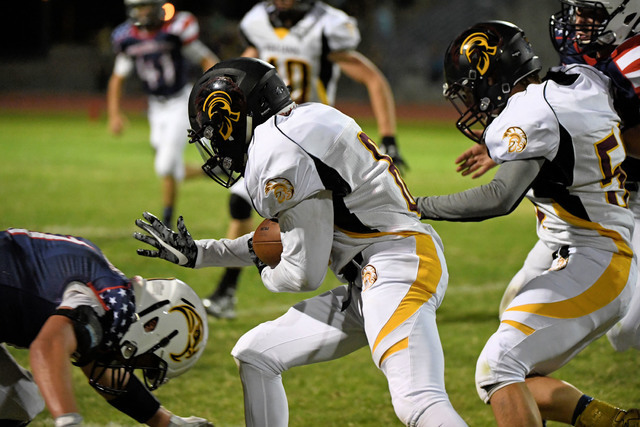 Peter Davis / Special to the Pahrump Valley Times Junior Dylan Coffman runs the ball against Boulder City last Friday. That game, the Trojans spread the rushing around and used 10 rushers for 207 yards.

The Trojans redeemed themselves in last week’s win against Boulder City and hope to continue their success against Chaparral.

According to Trojans coach Joe Clayton, his team will have to defend against the pass to win the game.

“The Cowboys (2-1 overall, Sunrise League) are a passing team, they are quick and athletic,” the coach said. “These guys are averaging 44 points a game and they put up 44 points against a good Basic team.”

Clayton said his team is best defensively when they exert pressure on the quarterback.

He said the Trojans (2-1, Sunset League) have some good, experienced players on defense, and this is one of the best defensive squads he has coached.

“Garret Monje and Aaron Fuentes are two of our best pass rushers,” Clayton said. “We will just let those two loose.”

He said his defense is getting good penetration and quickness off the line this year.

Offensively, the Trojans are coming off a great game against Boulder City where the Trojans didn’t have any turnovers and rushed for 207 yards.

In that game, Pahrump used 10 rushers, and when asked if fans would see more of the same against Chaparral, the coach said nothing was changing. He said running by committee gives his key players a rest.

The Cowboys have a quick and athletic QB in senior Santiago Vialpando. He has thrown this year for 917 yards in three games, where the team averaged 44 points per game.

Vialpando operates out of the shotgun and the team is a spread offense set. Vialpando can throw on the run and is a good pocket passer.

He also has an experienced core of receivers that can catch and are also a run threat.

The good news for the Trojans is that Chaparral does give up the run. Basic was able to rush for 249 yards against them. Pahrump should be able to run up the middle and even around the corners on this team.