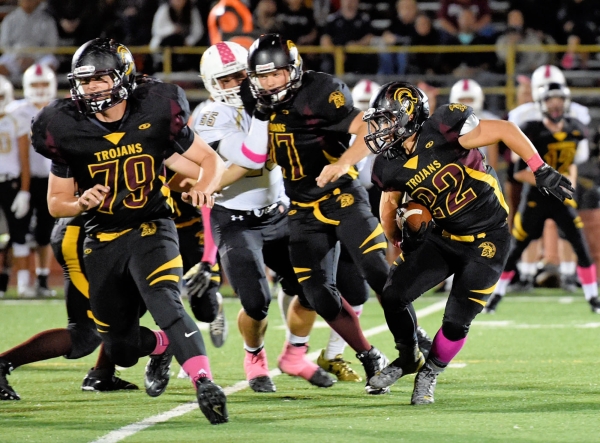 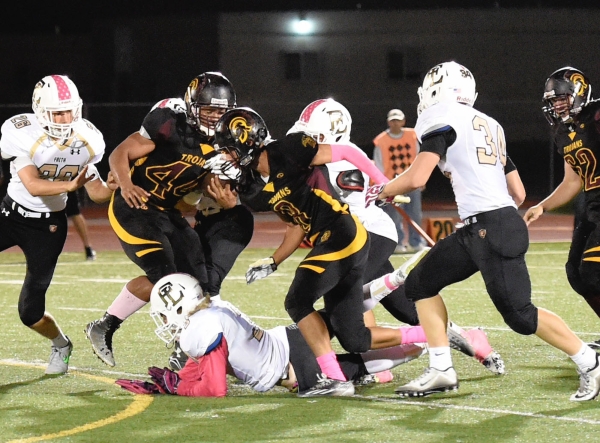 The Trojans coaching staff pulled all the tricks out of the bag in a failed attempt to beat division power Faith Lutheran on Friday.

Trojans coach Adam Gent had a variety of plays to try and fool the Crusaders – onside kicks, quick kicks, fake punts to name a few, but it all came down to who played better football and that was Faith Lutheran, who thumped Pahrump Valley 46-3.

Pahrump (3-5 overall, 2-4 Sunset League) probably learned a few new tricks from the Crusaders (7-1, 6-0) in the process, who also had a number of tricks during the game.

On the opening kickoff, the Trojans kicked an onside kick and recovered the ball in Faith Lutheran territory on the 48-yard line, but couldn’t cash it in. The Trojans turned the ball over on downs after the Crusaders repulsed a Tommy Gascoigne run for a loss on fourth down at midfield.

Then on the second play, Faith Lutheran scored on a Christian Marshall 50-yard run. Marshall’s running soon became a headache for the Trojans as he scored two more touchdowns. Marshall ran the ball for 99 yards and the Crusaders rushed for a total of 248 yards. With Marshall, the Crusaders didn’t need trick plays.

The Trojans were able to run, but barely, with 93-yards rushing. The team had trouble passing the ball too, with just 84 yards total.

The main reason Pahrump had problems moving the ball was an injury to Parker Hart, who was a main go-to receiver for Trojans quarterback TJ Milk. Hart wasn’t even suited up for the game.

During the game, the Trojans sustained two more injuries. One to Tyler Baumgarten, a sprained ankle. Baumgarten is an offensive tackle and also plays defensive. Kicker Joe Sladek also got hurt. He made a 25-yard field goal to end the half, but in the third quarter was injured running the ball on a fake punt. Both athletes remain questionable for this Friday at Sierra Vista, which is the last game of the season.

The Mountain Lions (2-6, 2-4) beat Spring Valley (5-3, 3-3) last Friday. This Friday the Grizzlies play Faith Lutheran. The Trojans will try to beat Sierra Vista, which could make Pahrump Valley tied with Spring Valley, but since the Trojans lost to them in league play, the Grizzlies would go to the playoffs.