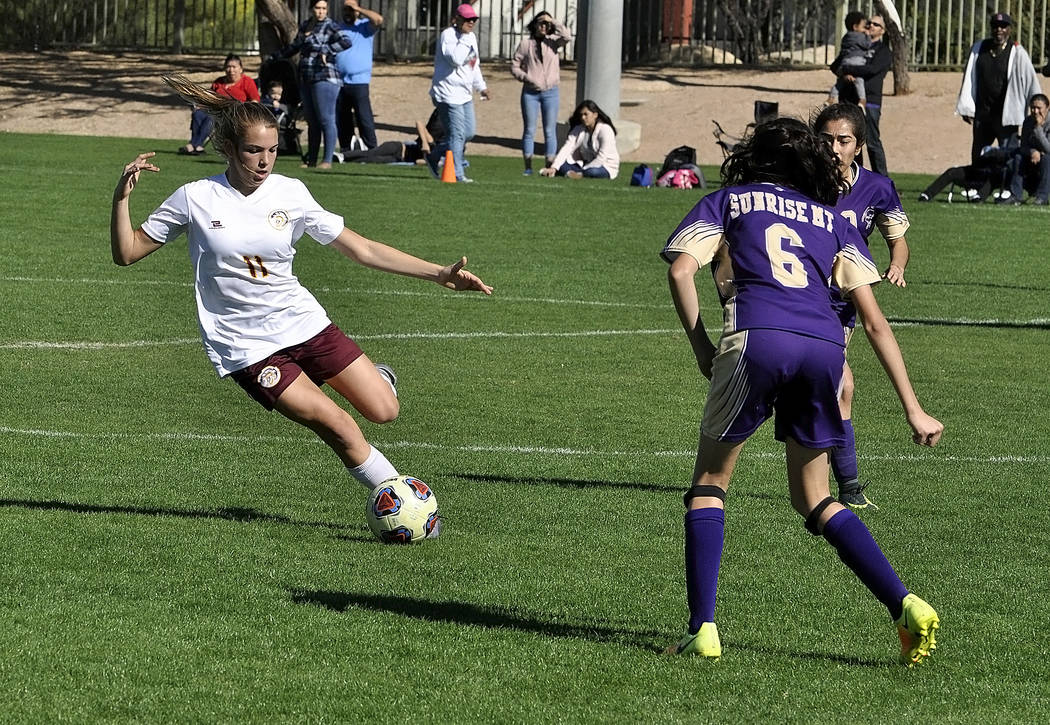 Horace Langford Jr./Pahrump Valley Times - Freshman Madelyn Souza doing what she does best and that is keeping the ball out of the Trojans side. Expect her to be pumped up for the game in Sparks. 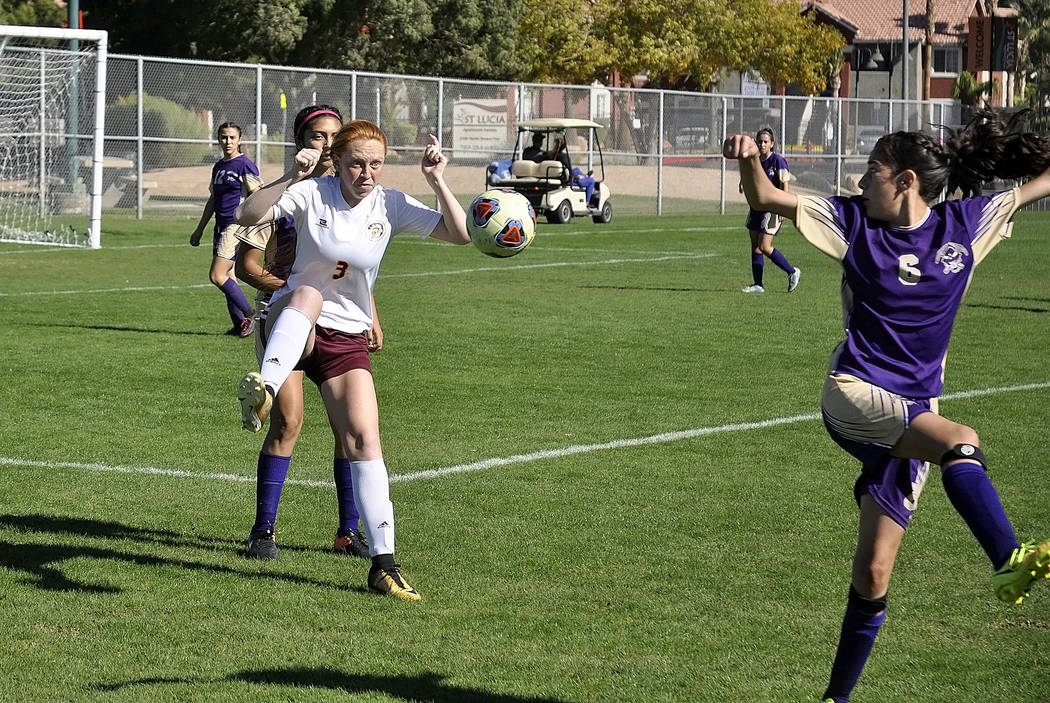 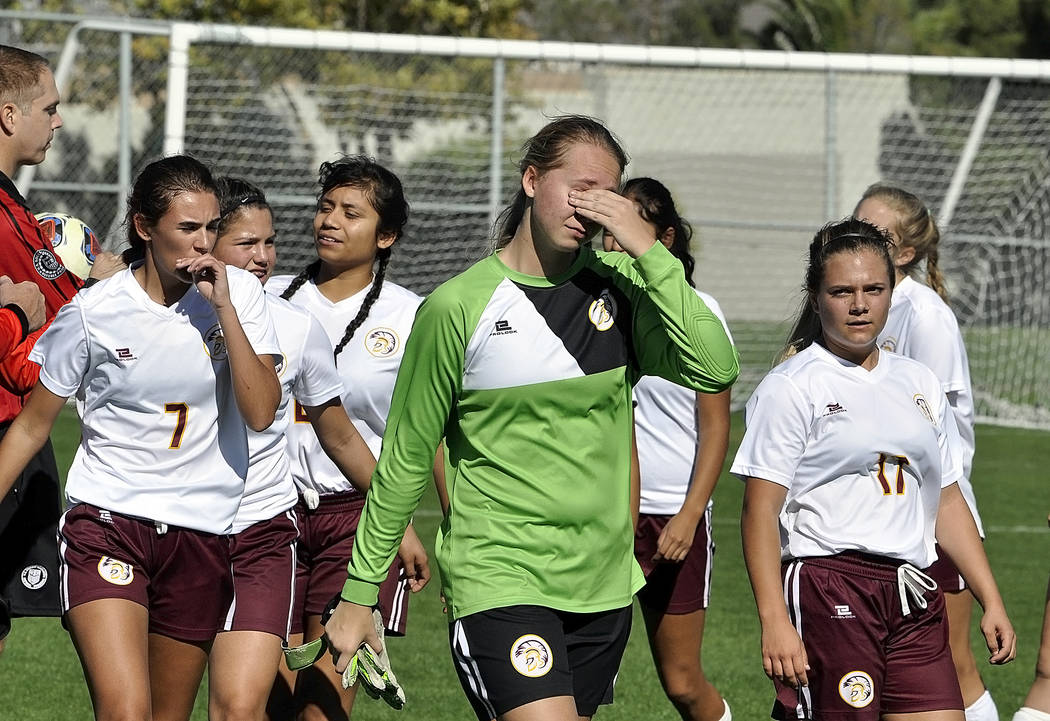 Horace Langford Jr./Pahrump Valley Times The Pahrump girls are not used to losing. Alyvia Brisco shows emotion at the close of the game after losing to Sunrise Mountain at the regional championship game, 2-1. 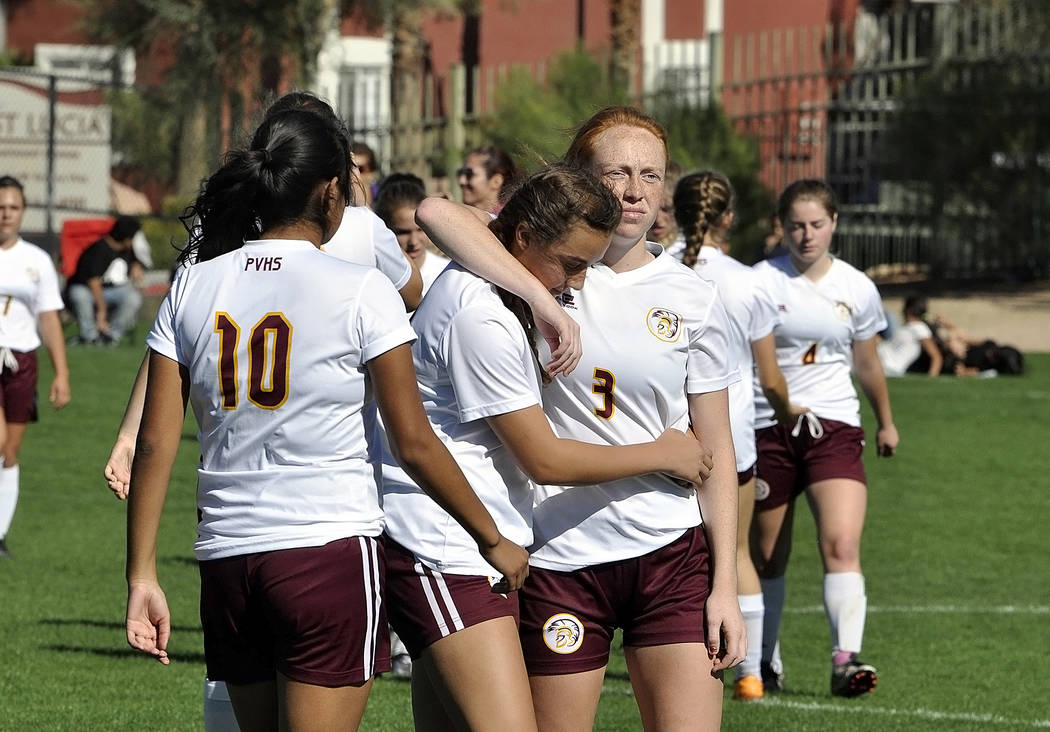 Horace Langford Jr./Pahrump Valley Times - "Kaitlyn Carrington is comforted by Kenya Vanderbeek after the game. The Trojans will play Truckee on Friday at 2 p.m. at Spanish Springs High School.

Despite the loss, the Trojans still move on to state as the No. 2 seed. The team will play Truckee, California at 2 p.m. on Friday at Spanish Springs High School near Sparks.

Pahrump is not used to losing, having lost only three games out of 22 and so the big question is: can this team recover from the loss?

Can the girls turn things around?

Niles thinks her team can.

“I feel we just need to step it up,” she said. “This is not going to come easy. We have to work for it. We just really need to step it up communication-wise, work with each other better and make better passes,” he said. “During the last game, defensively we just kicked the ball instead of passing it off. We also need to get back faster and not give them the opportunity to shoot the ball.”

Trojans head coach Julie Carrington is confident her team can come back.

“We want people to remember us. Because we are Trojans! And for me, just getting to state is a little redemption from last year but it’s not enough. I want the whole title for our team.”

The game vs. Sunrise Mountain

At the regional championship game, it was said in the Las Vegas Review-Journal that Pahrump dominated because of the wind. That was not the case.

The Trojans dominated the first half because of better passing and a more organized attack. They won time of possession and the number of shots taken.

The game was different in the second half. The Trojans scored within the first three minutes of the half. Senior Kaitlyn Carrington scored on an amazing head shot from a perfect pass from Sydney Dennis.

But then Sunrise quickly tied the game up on a junior Alexandra Trinidad goal.

“It sucks because we should have had this game,” Niles said. “We could have had five goals on them and we just didn’t finish and take advantage of the opportunities we had. We put too much pressure on our defensive line and our keeper because we were not keeping it on the offensive side in the second half.

“We just need to work on finishing it because once the first person scores, the game changes. We thought we had it after the first goal and they just took advantage of us.”

The question arose after the game that maybe the Trojans were tired after beating Southeast Career Technical Academy (Tech) 1-0. That game was won in overtime by the Trojans on a penalty kick by Sydney Dennis.

Senior midfielder Kathy Niles shot that down and said losing had nothing to do with being tired.

“It was our mindset,” Niles said. “We thought we could easily beat them and they beat us.”

She said this upcoming game will require the team to come together and change their attitude. Niles felt her team had plenty of opportunities to win.

“We have to take it seriously, for I feel that the last game we had the attitude that ‘we are already going to state and we had beaten them before,’” she said. “This game we have to have more focus. And we need to have the mindset that when the game starts, ‘a more we-need-to-play-now attitude.’ Because I feel we started out rough and almost got scored on in the first minute of the game. That was scary.”