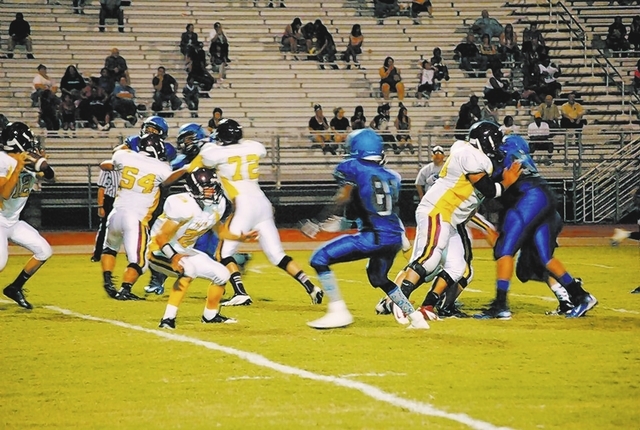 At halftime, the Desert Pines Jaguars had a 41-0 cushion over the Western Warriors. In just one half, the Jags had 280 yards to just 7 of Western. Western only made it into Jag territory two times. Desert had 24 snaps the whole game, but had gained 428 yards. This weekend the same spread offense, which dismantled the Warriors 61-0 is headed to Pahrump.

Trojans Coach Joe Clayton has confidence in his team and is not worried.

“They are going to run a spread offense,” he said. They spread you out and put you in a one-on-one tackling situation. Western was so bad that they probably did not show half of what they do. It’s kind of like us, we did not show a lot against Chaparral. We really don’t have any major concerns. We should do fairly well. We just have to keep them from getting in the open.”

Clayton and his team will be ready. They suffered no major injuries in the Chaparral game. The game against the Jaguars will be on Saturday at 7 p.m. due to the Jewish holiday, Rosh Hashanah, which was from Sept. 4 to nightfall on Sept. 6.

The Trojans will not be changing much. Their game plan is to run the ball down their opponent’s throat.

“Until they stop Scotty there is no need to do anything else,” he said. “At five to 10 yards a crack, why would we show anything else? If they can stop Scotty, then we will go around the edge. One game you will see a mixture of both. Some games you just see the jet (sweep). It really was not necessary to even pass last Saturday. The only reason we did play action was to keep them honest. If you get five yards a carry, I don’t know why you would change what you do.”

Clayton also pointed out some facts about last week’s game, which he hopes translates into this week’s game.

“We did not fumble the ball and had no turnovers,” Clayton explained. “People who call us one-dimensional don’t know football. Desert Pines gets a video and you know what they are doing? They are saying, ‘Look, these guys are one-dimensional. They only run four plays.’ All of a sudden, they don’t realize we have that speed on the edge, and our passing game is just as good as our running game.”

Some other critics might not think it wise to play senior AJ Segura at quarterback and defensive back. Clayton was quick to respond to that.

“On AJ, we are going with the philosophy we are going to put the best athletes on the field, special teams and defense. Why would you take that kid and put him on the sidelines? He had eight tackles last game. The kid was all over the place. He is an athlete. We have always known that, but in the past we just did not have the kids surrounding him. Now we have some athletes around him. He may be a defensive kid in college so this is a chance for them to look at that,” he said.

The game should be exciting with two powerful running games going head-to-head. The team that makes the least amount of mistakes will win. Desert Pines was penalized in its win against the Warriors 13 times for 138 yards. The Trojans had three or four penalties for way less.

Clayton hopes Desert Pines sees them as a one-dimensional team.

“Yes, we are one-dimensional and Maughan got 120 yards in 28 carries which is 4.3 yards per carry. Chaparral was suppose to be bigger and stronger and was going to punch us in the mouth and we rammed it right down their throat,” Clayton said.