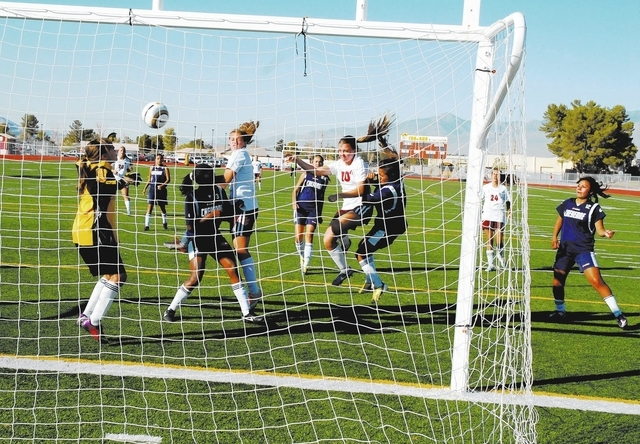 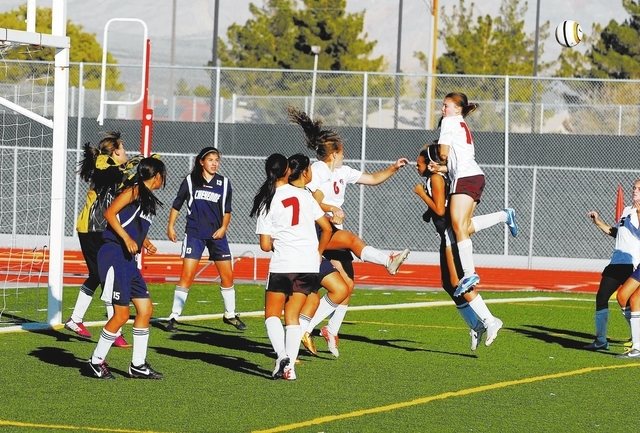 The Lady Trojans soccer team scored five goals in the first half and three in the second half to send the Cheyenne Desert Shields packing last Thursday at home.

Sydney Sladek led the team with four goals and Kristen Young was not far behind with two goals. Cheyenne never threatened and the Trojans pretty much scored at will.

The Trojans are winding down the season and getting ready for their face-off with Faith Lutheran. The first meeting with Faith ended in a tie.

The team played at Mojave on Monday and won and they play again at home against Clark today at 3 p.m. Next Tuesday they play host to Western at 3 p.m. and then are at Faith Lutheran for their last game of the season before the playoffs.

The Trojans bench is looking good. Two players are returning to the lineup, senior Lexi Smith and sophomore Gabby Vasquez. Both are just in time for the Faith game. One of the players, Gabby Vasquez, didn’t play in the Faith game and could be the difference the Trojans are looking for. Lexi Smith played against Faith, but was not at 100 percent.

Smith played against Cheyenne in her first game back since injuring some muscles in her abdomen. She said she is at 75 percent and was cleared to play against Cheyenne. Trojans Coach Pam Larmouth was glad to get her off the bench.

“I really did not want the pain of not playing her. Her sitting on the bench is not pleasant. I was being very selfish letting her play. She really did not have to stretch it too much though. She feels good. She will be good to go against Faith. We were going to keep her out until Faith, but we don’t want her to get out of shape. Honestly, it is her senior year and I don’t want to break her heart,” Larmouth said.

Vasquez didn’t play against Cheyenne, but will play the rest of the games. She was cleared last week and had an ankle injury.

“She has permission to play too, but because she was out so long she has to get five practices in before she can come back, so she will play the rest of the games. We will tailor the practices to her, a lot of by lines and wing works so she can get back up to speed,” Larmouth explained.

Larmouth is feeling good going into the Faith game. She feels the younger players are coming along well and have added much to their bench in offensive fire power.

“We have a lot of young players and we want them to get as much into the groove to what these seniors are doing,” she said. “You saw me put Paige in. Who knows, we might need her at Faith. It’s good for her in the future, but it is good for us now. We need these players because our bench is not very deep. We have 15 players. After having Gabby out, Lexi out and Bird is not always with us, we have got to be a little more flexible.”

Paige Chaffee is one of the strong players on the Trojans bench. She is a sophomore and just made the varsity team this year. She is the type of player who has the ability to come off the bench and score. She is the second goal scorer on the team, tied with her sister Kristen Young at seven goals.

“It is really awesome and I like to do it. I try my best to score. I just need to know where to go. I am getting better,” Chaffee said.

Junior Ashlyn DiBlasi is another flexible and highly dependable young player. She too can come off the bench and hurt you. She has 3 goals so far this year.

“I had a pretty good day and if it were not for my team it would not have happened. I usually don’t even play offense, since Gabby is out right now. I did play wing my freshman year. They moved me back to defense when Kaitlyn Klem left. It has gone pretty well,” she said.