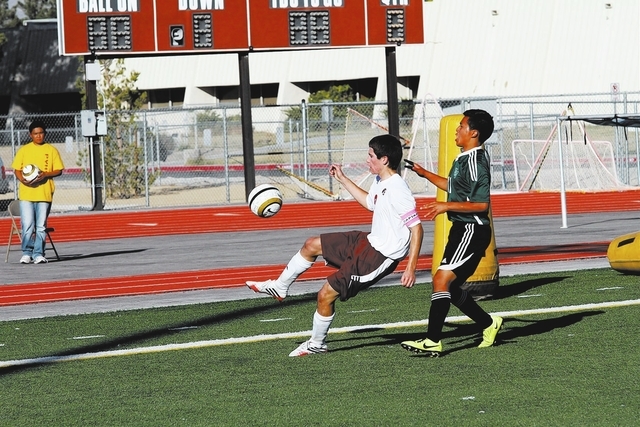 Trojans Coach Don Boulden has changed men’s soccer at Pahrump Valley High School for the better. He is the third head coach in three years, but the difference is he is turned this team around from a 3-10 team to a 6-6 in league team.

The Trojans dropped their last two games, but have a chance to turn things around against two very tough teams.

The squad played Western on Tuesday afternoon, which was too late to report. They lost to that team only 1-0 the first time around and they play Faith Lutheran on Thursday at home at 3 p.m. If they could take two games it would ensure a playoff spot.

Boulden knows his team can do it. He believes the team has the skill, but just comes up short.

“Today we had circumstances that beat ourselves. What was unfortunate is we had a defensive error, which truly cost us a goal. We had a defensive player who regained possession of the ball. Normally defenders are to regain possession of the ball and pass the ball forward. This player dribbled the ball right into an opposing player and the opposing player stole the ball and managed to score,” he said.

“The player was clearly offside by 10 yards. The ball was kicked and the player was clearly in an advantaged situation. He did not call off sides so he scores. Had we not made our own error and had the ref made that call it would be a 1-0 game in our favor,” Boulden said.

Boulden was then asked if he thought his team has learned enough to beat Western and he replied, “We know where we are at. We know four teams go to zone. Our record is 6-6. We are flat even. In order to get there we have to win both games. If we want to have a chance of going, we have to win Western or Faith. We want to squeak by with a prayer, somehow Western has to lose to Cheyenne, Adelson or Meadows,” he explained.

Regardless of the outcome, the team has come a long way and now can be the master of its destiny by winning the last two games.