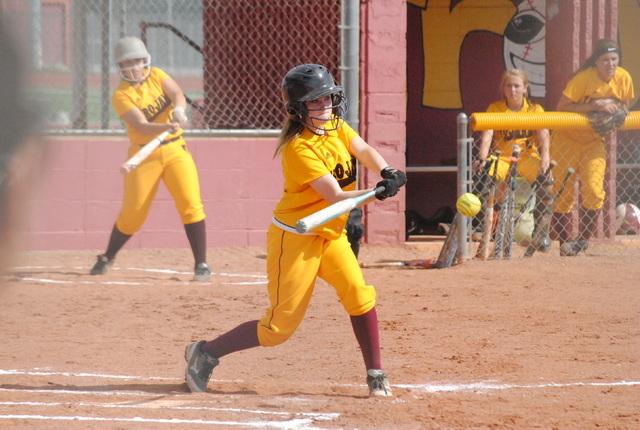 The Trojans softball team took two of their last three games. In games on Thursday and Saturday their offense just overpowered their last two opponents, but hit a wall when they faced Spring Valley on Monday.

In the last three games, the Trojans have scored 55 runs while only allowing 7. Now that’s some offense.

Trojans Coach Elias Armendariz said the defense is getting there.

“The quality of the teams we played against really didn’t hit the ball hard, if at all so I wasn’t able to resolve my defensive problems,” he said.

This proved true against Spring Valley who brought quality pitching. Armendariz knew the pitcher was better than what they had faced over the weekend. He had hoped his bats would overcome this, but it didn’t happen.

Spring Valley pitcher junior Michaela Hood pitched seven solid innings, giving up only one hit and striking out 11. The Grizzlies scored one in the fifth inning and one in the sixth. It was the best pitching the Trojans have faced all year.

Things will not get easier this week as the Trojans play at home against a tough Sierra Vista (3-3 overall, 3-0 Sunset League) team which remains the only undefeated team in the league.

Sierra Vista made the playoffs last year in the tough Division I.