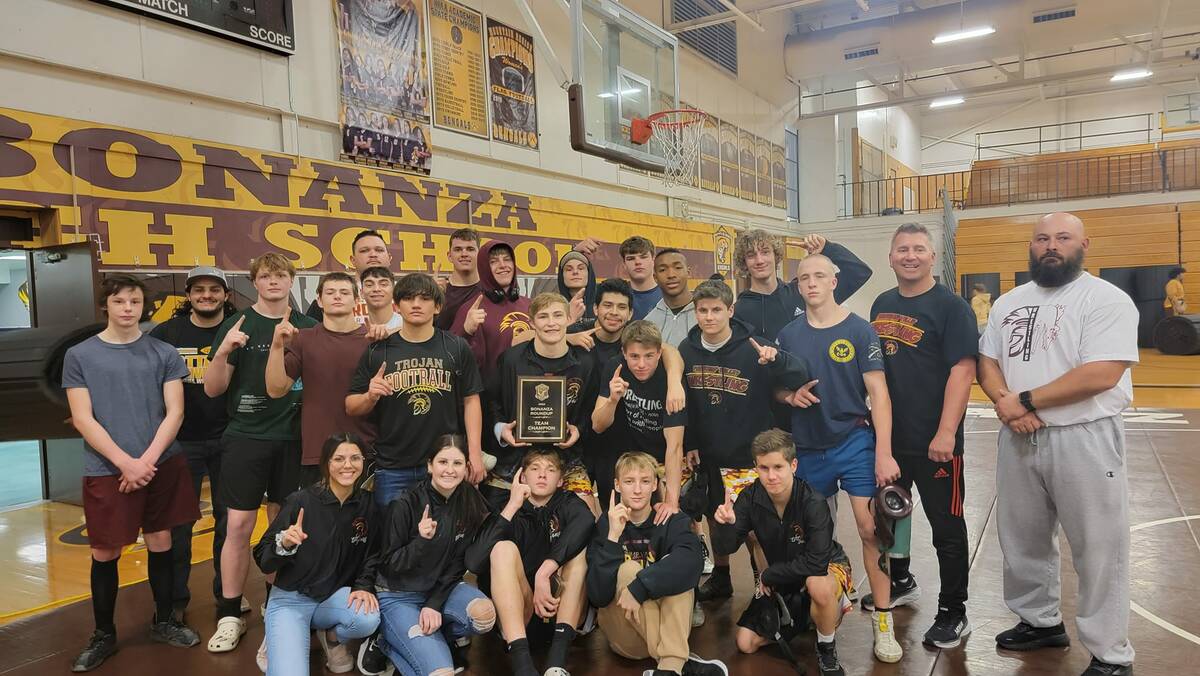 The Pahrump Valley wrestling team came out on top in the Bonanza Round-Up tournament on Saturday.

The Trojans went 3-0 in the duals portion of the tournament with wins over Canyon Springs, Pahranagat Valley and Coronado.

They kicked off their tournament against the Canyon Springs Pioneers.

The Pioneers only have six wrestlers on their roster, so the Trojans won eight of the 14 matchups via forfeit.

In the six matches that were held, the Trojans won four of them with first-round pins, including a pin just 21 seconds into the first round by Kyle Heaney in the 106-pound weight class.

Pahrump Valley would come out on top with an 84-0 victory.

In their second dual of the day, the Trojans faced off against the Pahranagat Valley Panthers of the 2A division.

The Panthers didn’t have a full roster either, so the Trojans won seven of the 14 matchups via forfeit.

Pahrump Valley won five of their seven matches against the Panthers.

Four of the five wins came by way of a first-round pinfall. The only win that didn’t end in the first round was a second-round pin by Nathan Schaaf after pulling off a successful reverse against his opponent to get the pin.

The only two losses for the Trojans were a decision loss by Steven Howard and a pinfall loss by Tannor Hanks.

The Trojans won their matchup against the Panthers 72-9.

In the final matchup of the dual portion of the tournament, Pahrump Valley faced off against 4A Coronado High School.

The Cougars came into the matchup with an undefeated record after breezing by Canyon Springs and Pahranagat Valley.

Coronado jumped out to a 9-0 lead after winning the first two matches.

However, that seemed to light a spark for the Trojans as they went on to win 11 of the final 12 matches.

Despite losing his match in a 7-5 decision, Cole Miller had one of the most exciting matches of the day.

He and William Higgins of Coronado went into the final round tied at three points apiece.

With under 30 seconds left, and still trailing 4-3, Miller pulled a reverse against Higgins to jump ahead 5-4 on the scoreboard.

Higgins was able to get back to neutral, earning himself a point and tying the match at five points each.

With less than 10 seconds left on the clock, Higgins scored a takedown to grab the 7-5 lead and hang on for the win.

The Trojans would come out on top with a 63-12 victory and went into the knockout stage with a 3-0 record.

Pahrump and the Bonanza Bengals were two of only four schools who finished the dual portion with undefeated records.

With these teams being undefeated, it would set up for a first-round match in the knockout round.

The Trojans would win 11 of the 14 matches against the Bengals. Eight of their 11 wins came with first-round pinfalls.

Bishop Carter had the fastest win of the round for the Trojans. He pinned his opponent, Stella Dymon in just 24 seconds in the first round.

Pahrump Valley moved on to the first-place match with their 63-15 victory over the Bengals.

In the championship round, the Trojans came face to face with the Basic Wolves of the 5A division.

The Wolves finished the dual portion of the tournament with a 3-0 record, getting wins over Chaparral, Lake Mead Christian and The Meadows.

The Trojans stormed out to a 39-6 lead after the first eight matches, winning seven of the matches. Pahrump won four of those matches with pins in the first round.

Cole Venturo pinned his opponent in just 27 seconds to finish the tournament with a 5-0 record.

Brennen Benedict was the only other Trojan wrestler to finish his tournament with an undefeated 5-0 record after pinning his three opponents in the first round and winning his other two matches by forfeits.

The Wolves gave the Trojans a little bit of a scare in the second half of their matchup on Saturday when they won four consecutive matches to pull within 11 points, 39-28, with two matches to go.

Pahrump Valley clinched the win when senior Tannor Hanks won his match against Corbin Hutto with a second-round pin.

The Trojans defeated the Wolves 45-34 to take home first place in the tournament.

Pahrump Valley was back to the mats Tuesday evening in a showdown on the road with the Del Sol Dragons.

The Trojans will be back at home this Thursday, Jan. 19, with a matchup against the Virgin Valley Bulldogs. This will be the last home wrestling meet of the season for Pahrump.

The varsity matches will begin at 6 p.m.