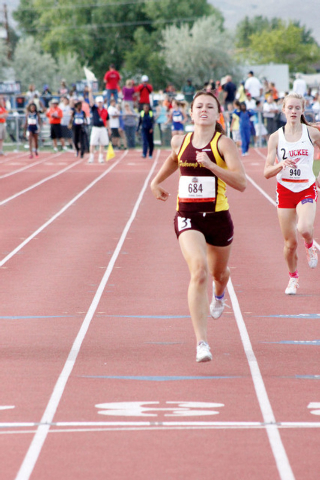 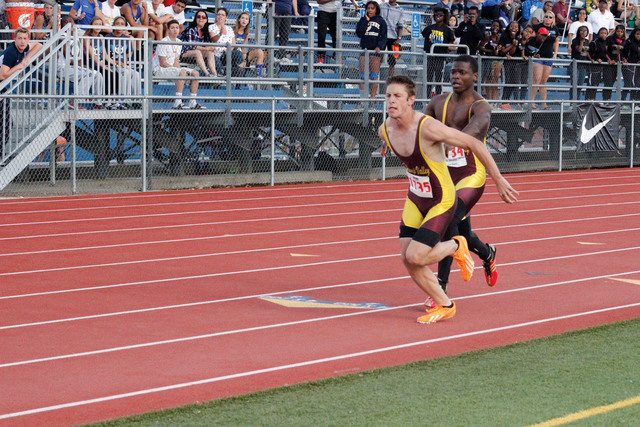 The Trojans left Pahrump on Thursday with the chance of some repeat individual champions and perhaps a few new ones.

The team came away with two individual champions. They were in the boys 110 hurdles, Devon Montgomery and for the girls 800-meter run, Sydney Sladek. Both champions had a chance to be double state champions, but it was not to be. Both repeated in the same events as last year.

Montgomery finished the 110 with a 14.59 time and Michael Carlson was not too far behind him with a third place for 15.51.

In the 400, the race was wide open in the last 50 yards said Kirkwood and Sladek came close to taking it.

Montgomery also had a chance to be a double champion, but he was disqualified in the 300-meter hurdle for stepping into another lane.

Trojans Coach Ed Kirkwood said Montgomery was nervous before the 300 but recovered before the 110.

“He couldn’t eat before that race, he was really nervous before the race. On the second hurdle he came down hard and smashed the hurdles and he had gone into the other lane so he was disqualified. This affected him and he was really nervous for the 110. I told him, ‘The 300 would have been nice, but we all know why you came here and that was to repeat in the 110. Put that 300 behind you.’ He turned it around and got his swagger back and did it,” Kirkwood said.

The boys had two field eventers, Jacob Stearns in the pole vault and Isaac Davis in the high jump. Stearns came close to his personal goal of 13 feet by vaulting a 12-00 but finished in 7th place. The winner for the boys vaulted 15-00 and was Brendan Shelley of Elko. According to Kirkwood, Stearns was disappointed for not medaling but was happy to get a personal best in his 12-00 foot vault.

Davis had a good showing and jumped 6-00 to finish in 5th in the high jump. Benji Ply of Dayton jumped 6-07.00 and finished in 1st. Davis is a sophomore and will be back next year.

The Lady Trojans did slightly better than the boys’ 4×100 with a 3rd place finish. Their team of Kelsey Souza, Jamie Murphy, Amber Hill and Middleton finished with a time of 50.84.

The girls only had two field eventers, Andi Bishop in the pole vault and Meghan McDermott in the triple jump. Bishop came in 6th place with a vault of 8-06. Vivian Neff of Elko took that medal with a 10-00 vault. McDermott and Bishop are both sophomores and will be back next year.

In the end, the Faith Lutheran Crusaders girls took the team championship with 134 points and Tahoe-Truckee came in second with 87 points. The Lady Trojans came in 5th with 42 points.

For the boys, Dayton beat out Faith with 100 points, Faith had 84 and Pahrump came in 9th with 24 points.

Kirkwood was happy with the year.

“We came home with 9 medals and it was definitely exciting to see our champions repeat,” Kirkwood said.