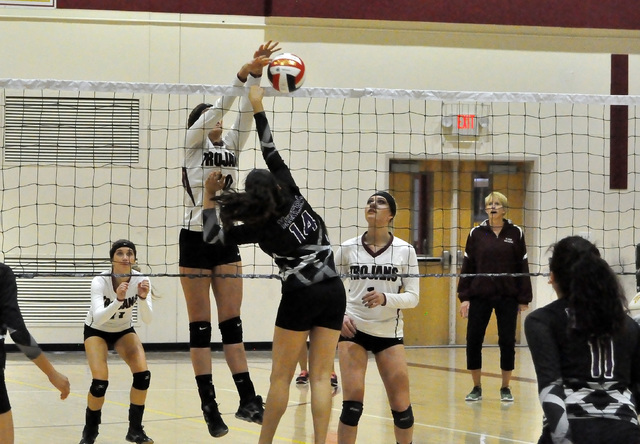 Horace Langford Jr. / Pahrump Valley Times Koral Hearn stuffs a Miner attack as Bethany Clavert (#11) and Alexis Trieb (#1) looks on. The Trojans won in 3 sets, which was played in 45 minutes. 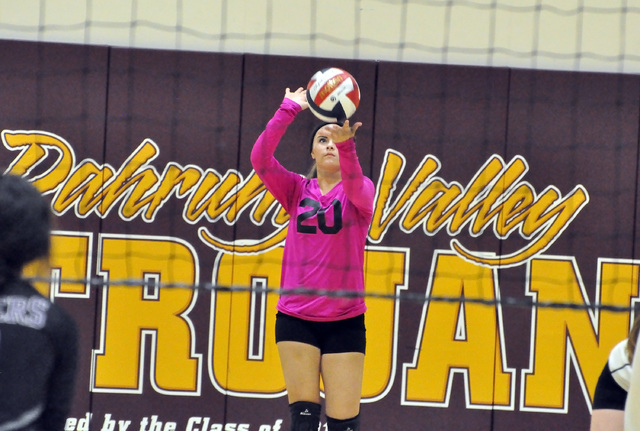 The Trojans girls volleyball team breezed by Sunrise Mountain in three sets, 25-3, 25-6, 25-4 to win their first match of league play on Monday.

The Miners (0-13 overall, 0-1 Sunset League) were barely able to get the ball over the net.

In addition to the Monday night match, the Trojans (7-10, 1-0) more importantly had a 5-3 showing at the Boulder City Invitational.

“I think we played very well,” Trojans coach Jill Harris said. “The setup was a bit goofy on the second day because of the one set in the matches. We are not a fast-starting team, so it kind of hurt us. It’s the best we ever have done at that invitational. The competition was really evenly matched. The girls played tough.”

Sierra Vista was the overall winner of the invitational.

Harris feels the teams to beat are all in the Sunrise League.

Harris also believes her team is the team to beat in the Sunset League.

“We are the number one team on this side,” Harris said. “The number two team is Cheyenne and we have beat them every time we have played them. We have seen them two or three times. In scrimmages and things like that.”

Harris said the team is looking good. She recommended Bethany Calvert to NevadaPreps as the player of the week.

Harris said she wishes her division was a lot stronger. She believes to be the best; you have to play the best.

She says she has two open spots on her schedule to fill and she is seeking better teams to play.

“I will even go out to play Whipple’s team (the 1A champion in Alamo). I am seeking permission for that,” she said. “I am willing to play 4A teams but Clark County schools all play each other and their schedules fill fast.”