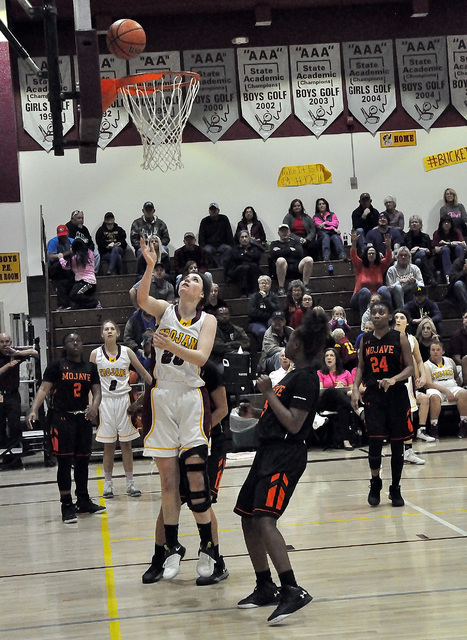 Jill Smith sinks a basket for Pahrump against Mojave on Monday. She led the team in scoring with 14 points. The win over Mojave secured Pahrump’s first playoff berth since 2008. Horace Langford Jr. / Pahrump Valley Times 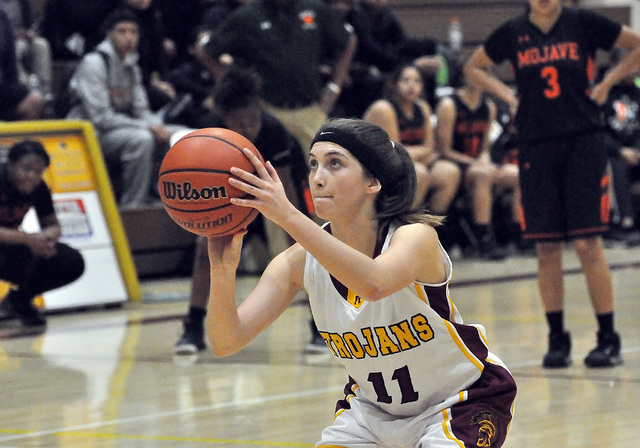 Calling it close again, the Lady Trojans played their second straight nail-biter, beating Boulder City 35-33 in the last nine seconds on Friday and then beating Mojave in the last second, 37-35, on Monday.

The win over Mojave assured Pahrump (11-11 overall, 4-3 Sunset League) a playoff berth for the first time since 2008.

“It was a great win for us, qualifying us for a spot in the playoffs,” Trojans coach Bob Hopkins said. “We can win that big game. The girls are capable of playing at the level of any team. We just have to rebound and be patient.”

During the Boulder City (7-13, 3-3 Sunrise League) game, Isabelle Mesa sank the game-winning basket. Mesa finished with eight points, and Bethany Calvert had 11 points for Pahrump. The Trojans had a 20-16 lead at the half.

“We had to take Calvert out and played without her for six minutes because of foul trouble,” Hopkins said. “I was nervous but our bench, led by Jackie Stobbe and Maddy Pereira kept us in the game and the bench won the game for us.”

Kiara Lemon made two 3-pointers in the fourth, scoring 12 points in that quarter for her team.

Jill Smith led the team in scoring with 14 points and Mesa had 11, but it was the calm free-throw shooting by the Lady Trojans that kept Mojave from winning the game.

Mojave was within two points (28-26) with 41.7 seconds left in the game when they committed a technical foul that brought Calvert to the line for two free throws. Calvert, with nerves of steel, sank both of them to give the Trojans a 4-point lead.

“It was a lot of pressure but it’s just one of those things where you have to step up,” Calvert said. “This was one of the most important games of the season and we really wanted that playoff spot. I knew I had to get it done.”

She said when she made the shots she had to block out the anger she was feeling.

“I was angry at the Mojave player that fouled me,” she said.

After Calvert sank her two shots, Pahrump went up by six points, 34-28. Mojave had to foul the Trojans to get the ball. Alyvia Briscoe went to the line twice at 31 seconds and 13 seconds, sinking two shots, and then Smith with one second made the last point of the game with her free throw to give the girls the win.