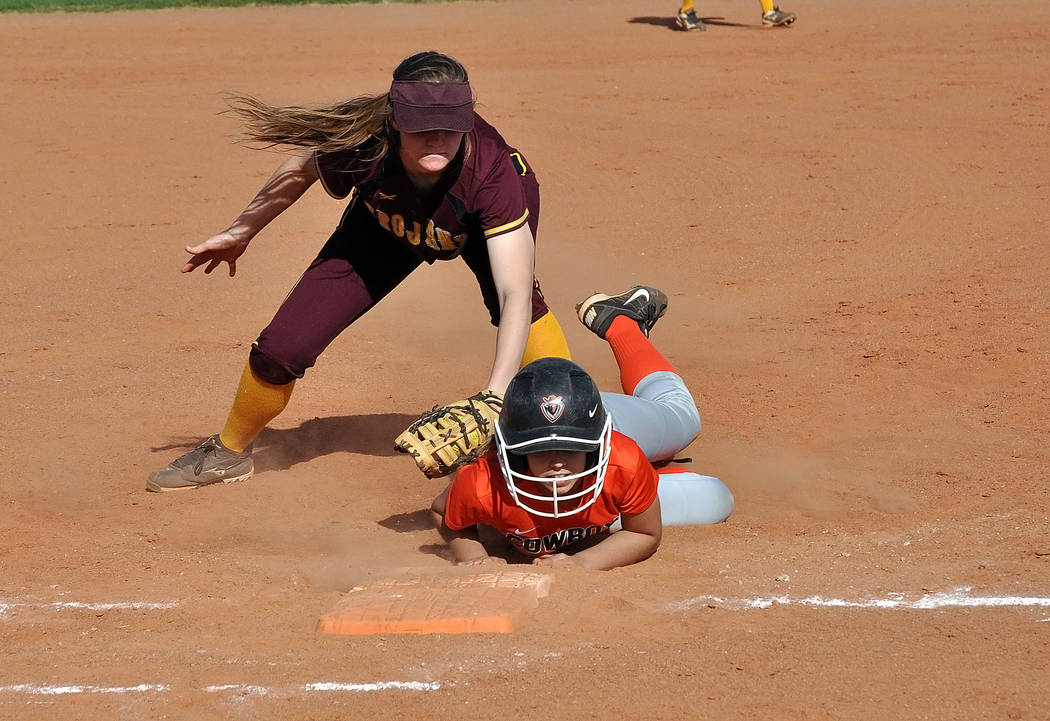 Horace Langford Jr. / Pahrump Valley Times Trojans first baseman Jill Smith goes for a tag on a Chaparral runner. Trojans coach Eli Armendariz was pleased with the Trojans defense as they made only two errors against Boulder City. He said the defense was moving in the right direction and focused during Wednesday’s game against the Eagles.

The Trojans took advantage of an error and scored six runs in the fourth to defeat top-rated Boulder City 8-3 on Wednesday afternoon on the road at Boulder City.

“It was the top of the fourth inning and there were two outs when Taylor Egan hit a ground ball to the pitcher,” Trojans coach Eli Armendariz said.

“I thought the inning was over and then I saw Taylor on third and I turned to a player next to me and said, ‘did the first baseman drop it?’”

And that’s what happened, the first baseman dropped the ball, resulting in a Pahrump six-run inning.

“We took advantage of that error and then the top of my lineup had timely hitting after that,” the coach said.

For the game, the Trojans (7-2 Sunset League) got 11 hits on Wednesday.

Prior to the game the coaches’ poll had Boulder City as the 10th-ranked team in Southern Nevada. The Trojans win put an end to that.

Pahrump will use its remaining preseason games to tighten up the defense and pitching.

“We were at Boulder City, making too many errors, letting our opponents get back in the game,” Armendariz said. “If we can stay focused now. I was really pleased with the two errors made. I really feel Boulder City (9-5 Sunrise League) is the team to beat this year.”