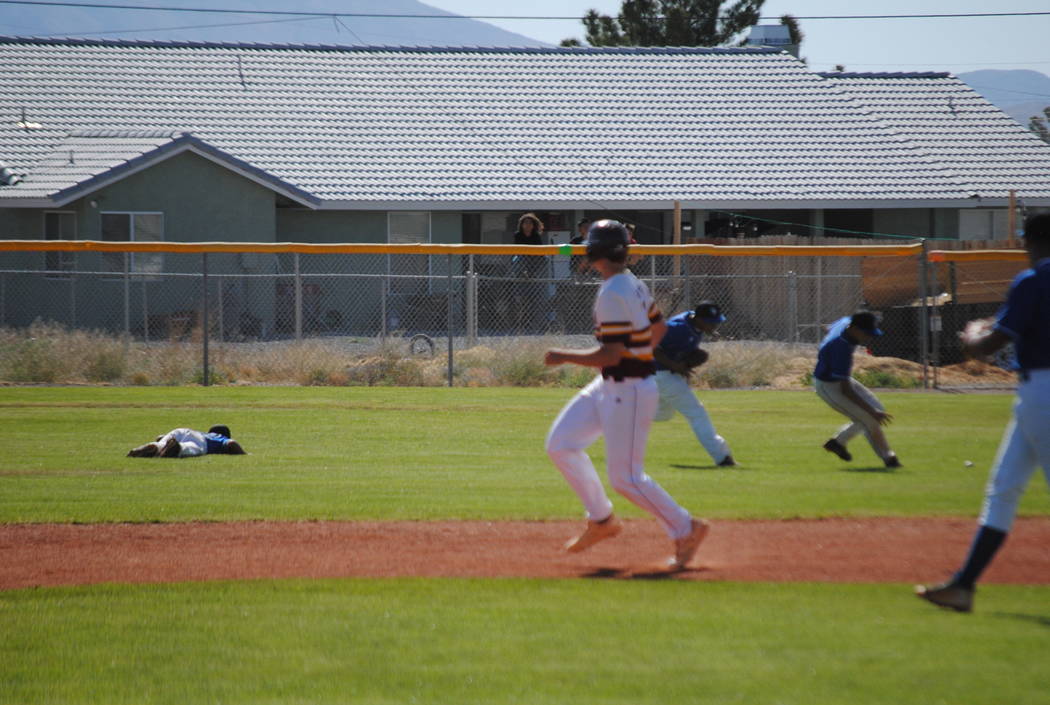 Charlotte Uyeno/Pahrump Valley Times Collision on the field leads senior outfielder Parker Hart to an extra base on an error. 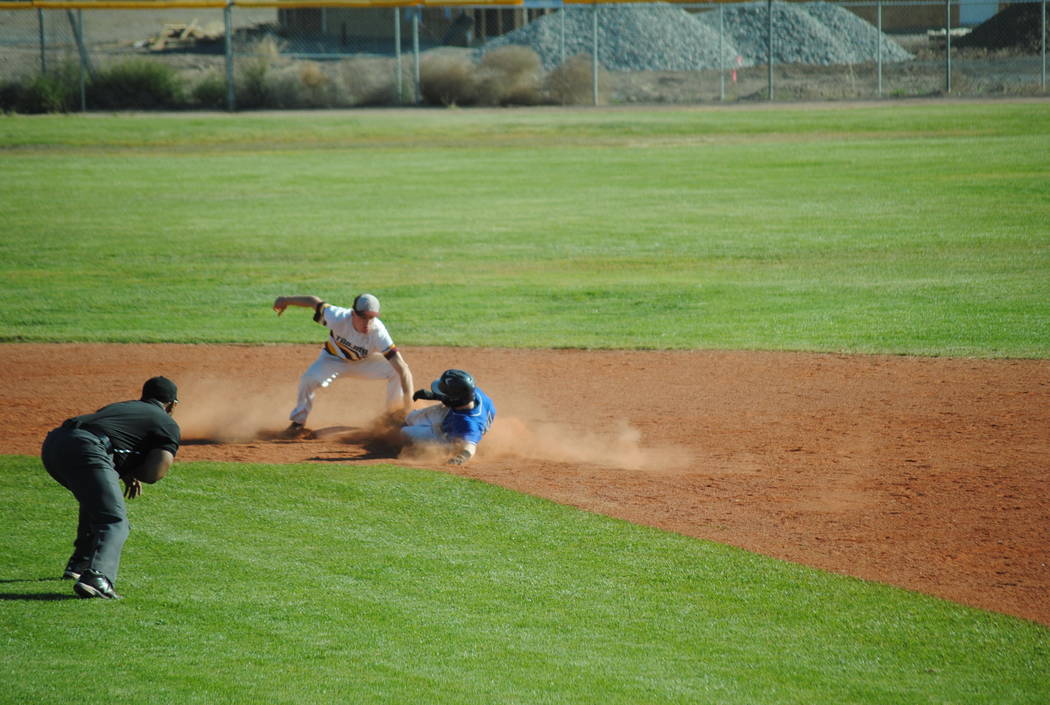 Charlotte Uyeno/Pahrump Valley Times Drew Walker gets the out with the steal attempt at second base against Desert Pines. 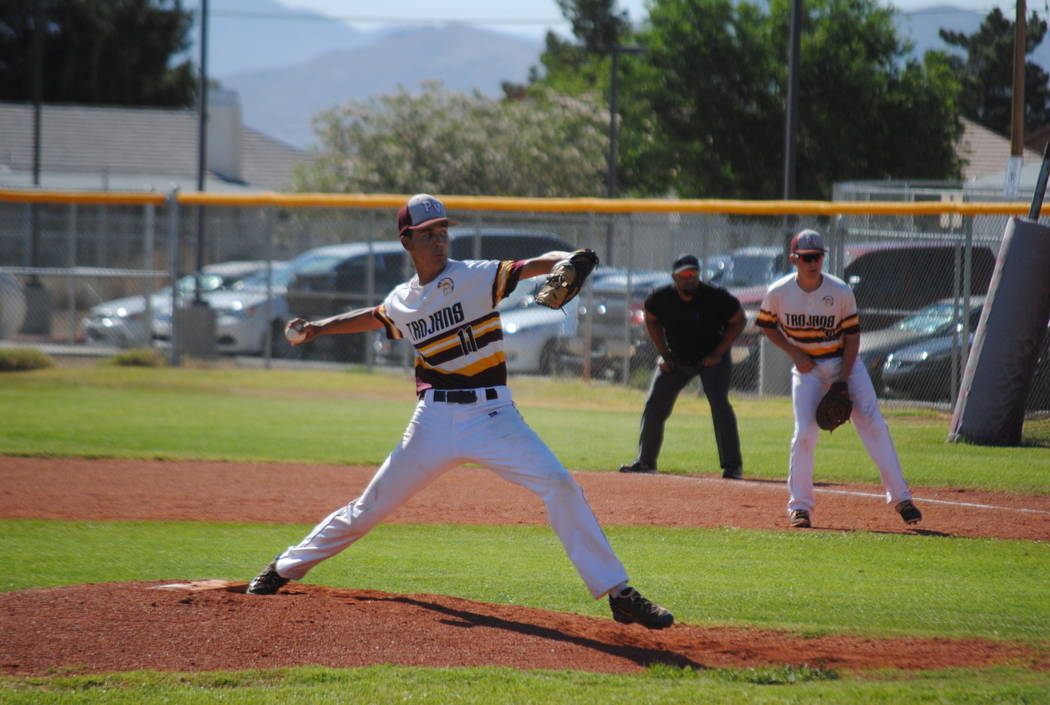 Charlotte Uyeno/Pahrump Valley Times Senior Trojans Pitcher, Josh Ferrer, gets his second win in a row as he pitches a good solid four innings against Desert Pines on Wednesday before Trojans coach Brian Hayes brought in freshman relief pitcher Cyle Havel who went on to save the game.

The Trojans baseball team had some playoff jitters its first game, losing to Virgin Valley 3-2 on Tuesday at home, but then settled down in the second game against Desert Pines on Wednesday, beating the Jaguars 8-5.

“I really don’t think we played that badly on Tuesday,” Trojans coach Brian Hayes said. “But we just didn’t hit the ball. Yesterday we gave them one run and we just had problems with runners in scoring positions.”

The loss put the Trojans in the elimination round, but this time it was different and the Trojans came from behind off of timely hits in a must-win home game.

In the Virgin Valley game, Pahrump went down in order in the first four innings. The team didn’t score until the sixth and seventh innings, coming up short by one run.

It was a different story on the second day of the playoffs as the Trojans recovered from a three-run Desert Pines first inning.

Trojans senior pitcher Josh Ferrer settled into a rhythm, shutting down the Jaguars for four innings. While the Trojans defense and pitching did their jobs, Pahrump’s hitters did theirs.

Trojans senior outfielder Parker Hart got on base on an error by the shortstop and scored the Trojans’ first run on an RBI single by Garrett Lucas.

The Jaguars then gave up to walks to load the bases. John MacDonald got an RBI single and Chase McDaniel also got an RBI to give the Trojans a four-run inning and a two-run lead. The Trojans went through the entire lineup that inning.

The Trojans’ final three runs came in the fourth inning. The rally was started by Garrett Lucas, who hit a single with one out. Joey Koenig was called in to hit for Tyler Floyd and hit a single. John MacDonald came up and got on board on a catcher’s drop after the third strike and a throwing error to first to load the bases.

Zach Trieb came to the plate to hit for Cyle Havel and got hit by a pitch, forcing a runover. Then two hitters later, with the bases loaded, Nico Velazquez blasted a single to right field, driving in two more runs, which gave the Trojans enough to hold on.

Velazquez came off the bench and delivered a much-needed hit.

“I was thinking I just had to get on base,” sophomore player Velazquez said. “It was the first pitch and I was expecting a fastball. As a team, we want to win this.”

Timely hitting made the difference

“Today we got the timely hitting,” Hayes said. “Velazquez is not a super hitter but he sees a lot of pitches and gets on base. And he got a big hit. I think we are looking good going into these last three games.”

Desert Pines would score two more runs in the sixth inning to make the score 8-5. They then threatened in the top of the seventh inning. Freshman relief pitcher Cyle Havel walked the lead-off batter. He got the second one to fly out, and on that play the first runner, who was on second base, tried to tag and go to third and was thrown out for the second out.

Havel then balked and the third runner got on base. Then he walked the fourth batter and so had two runners on with the winning run at the plate with two outs. Havel then concentrated on the batter and threw three straight strikes to strike out the last batter and win the game.

After the game, Hayes told his team that he knew that they would beat Desert Pines.

“It’s all about expectations. I expect to win and the team needs to have high expectations,” he told the team after the game. He said if they did that they should get through the next three games.

Coach is confident about pitchers

“Our pitching looks good, we haven’t even touched Bradda Costa and Willie Lucas hasn’t thrown and we have freshman Rayder Maestas and Dylan Grossell, who both can throw too,” Hayes said. “We may not have pitchers that throw gas (fast) but they throw strikes,” he added.

The bottom line is Hayes is not worried about running out of pitchers in this tournament.

“This bracket plays in our favor, we had Desert Pines, who we have had success against and Mojave on Thursday, who we haven’t lost to. Then we will have to play the other side and we have played well against the other side.”

The Trojans beat the top-seeded team, Moapa Valley, earlier in the season by one run, 5-4, but lost to the second-seed team, Boulder City 12-5.