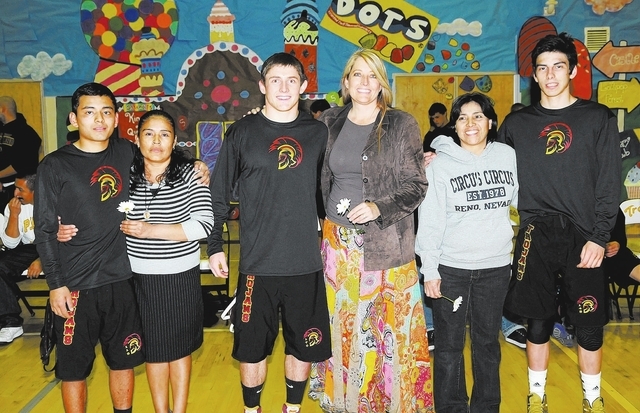 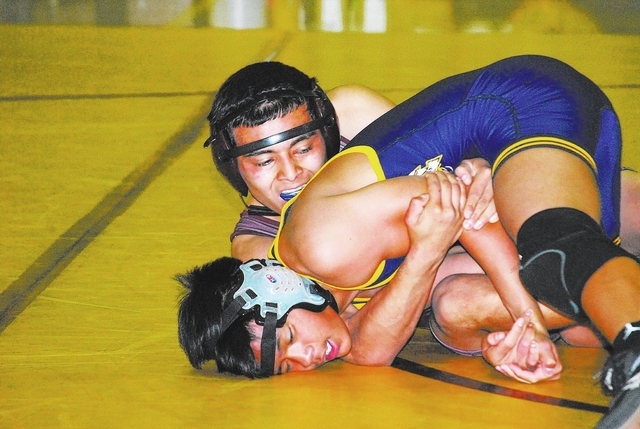 The Trojans men’s wrestling team is on its way to a second conference title with the most recent wins over the Cheyenne Desert Shields and the Mojave Rattlers in the past two weeks.

Last week against Mojave the Trojans secured their third conference win 69-8. The Trojans are now 4-0 in conference action and tied with Clark with their win against Cheyenne 76-6 on Tuesday. The team had 13 wins and one loss against the Desert Shields.

The team took on Clark Thursday for the Sunset League title too late to report on.

Tuesday was the last home meet of the season for the Trojans and so the team took the time to honor its three seniors: Scott Maughan, Stephen McCormick and David Martinez. All three wrestlers recorded wins against Cheyenne.

Stephen McCormick at 145 pounds said it was great he got the win and took his man down in a technical fall.

“It was important to win tonight because it is something that will stay with me forever. I am not sure if I will be wrestling in college. I was pretty confident coming in here. I think I am one of the top wrestlers in the conference. I think I will qualify for state. I have beaten everyone in the conference. The toughest kid was the Mojave kid,” he said.

Scott Maughan at 170 pounds dispatched his man with no problems. He got his man by a pin.

“It was the biggest thing and it felt good. For regionals, I plan on being the top seed and qualifying for state,” Maughan said.

When Maughan was asked if he was concerned with anyone from the Sunrise League he replied he really was not concerned about anyone.

David Martinez at 113 pounds had not wrestled last year and was just happy to make the team his senior year.

“This will be my last time I wrestle at home. It has been really good to be part of the team,” he said.

Martinez expects to do well in regionals because he has been working hard and said he will try his best.

Trojans Coach Craig Rieger was happy to get the win against Cheyenne.

“Since Bullhead City our scores have been lopsided in our favor. Cheyenne has some good individuals but we wrestled tough,” Rieger said.

In regionals, even with the strong lineup that Rieger has he feels his team will do well but will not dominate. He said there are just too many unknowns. One of the schools Rieger is worried about is Virgin Valley, a team who always has a quality wrestling team.

“Tonight Virgin Valley and Desert Pines are wrestling and I asked someone to go over to Desert Pines and watch Virgin,” Rieger said. “Virgin Valley is tough and they are the ones to beat on the other side and we have not been able to read much about them. It has just been word of mouth. Virgin does a lot of wrestling in Utah instead of coming to Vegas. We will see them at zone,” he said.

Desert Pines almost beat Virgin. The score was 41-34. Two wins more and Desert Pines would have won. Virgin Valley remains undefeated, but the strength of their team is still unknown to the Trojans.