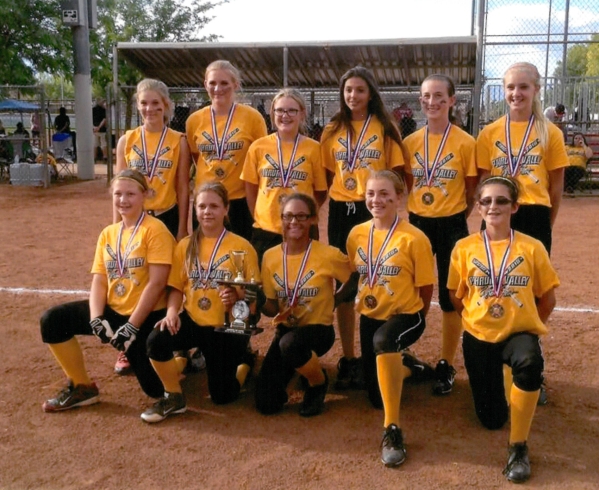 The Pahrump Youth Softball Association U12 girls tried something new this year with how they coached the girls and it paid off in the form of more wins this year.

Last year’s U10 team, who are now on the U12 team, won five games total and just one all-star game. This year the coaches decided to try something new.

According to U12 Coach Rich Lauver, the division in Pahrump only has two teams who play mostly Las Vegas squads. This year those two teams combined were coached together by the same seven coaches instead of separate coaching staffs like the year before. Those same coaches then coached the all-star team.

“This meant that we were all on the same page,” Lauver said. “The teams did really well and had 20 wins during the season and one of the teams won the Spring Fling.”

“We beat the Northern Nevada Sharks in a tourney 14-1, who eventually won that tourney, but it was good to beat them,” Lauver said. “In Arizona, we also beat the state champion runner-up 7-5 in a tourney.”

Lauver said these girls have been slowly improving each year and it all started three years ago.

Lauver said the goal is to become an A-level team next year.

“In A-level ball, everyone who plays has a legitimate shot at playing college ball,” he said. “Colleges look at A-ball players.”

As it is now, Vegas has a few A-level teams and those teams feed all the high schools. If Pahrump were to get an A-level team, that team would feed just one team, Pahrump Valley.

“We would be the only team to walk into high school with a whole A-level team,” Lauver said. “This year has been exciting and we got to travel and play different teams from all over Arizona, Nevada and California. We went everywhere to find a game.”