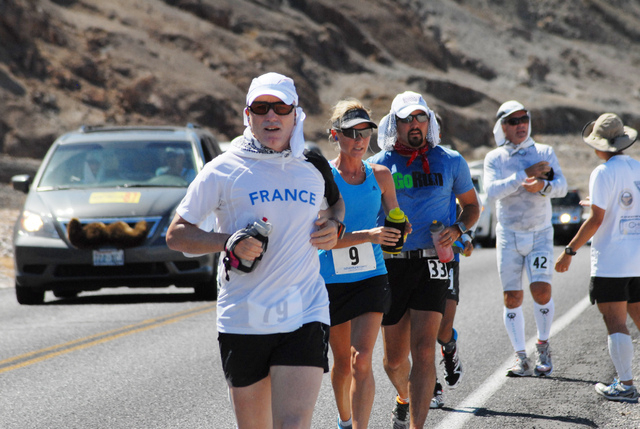 The Badwater race returns to Death Valley National Park in 2015, but with restrictions. The biggest change will be when the race will be allowed to be held. It will no longer be during the heat of the day, but at night.

This year the National Park Service put a moratorium on most sporting events for almost a year-long safety review. No one even knew if the Badwater race would return to the park after more than a quarter of a century racing in Death Valley. Of course the Badwater race was not the only one affected by the review, just one of the most popular events. According to its own report, the national park has hosted as many as 14 sporting events a year.

The race usually occurs in mid-July and started in Badwater, the lowest point on Earth, and ended at Mt Whitney, the highest point in the continental United States at 14,505 feet. It is 135 miles and was billed as the toughest race in the world because of the heat factor and elevation changes. This year the race was outside the park at Lone Pine, but still ended at the Whitney Portals. Badwater attracts about 90 to 100 racers each year and has a big economic impact on the region.

AdventurCORPS Race Director Chris Kostman released that the race will be from July 28-30, 2015 and will start in the evening. The following is a statement from Adventure CORPS to its Badwater racers: We are pleased to announce that the 2015 Badwater 135 will be … on the traditional route from Badwater to Mt. Whitney … As was the case in 2014, 100 runners will be accepted to compete. We are excited to return to Death Valley! We will have a more detailed announcement after the New Year regarding the new rules and regulations for operating sporting events within Death Valley National Park … Event participants and support crews won’t see too much that is different, other than more rules to follow.

Cheryl Chipman, the Death Valley National Park spokesman, said the changes to the race are part of the new conditions, stemming from the safety review.

“One of the new conditions is that events can’t take place if the temperature is above 110 degrees. This is how AdventureCORPS can have the event at the original time it wanted to have it. They can start it at night when the temperatures are lower. For this event we are following federal health and safety guidelines and that is why we chose 110 degrees because it follows those guidelines for working in the heat and we believe this will be safe enough for our staff.”

Now that the National Park says the race will be held at night if the temperature is below 110 degrees will the runners still show up? The whole race was about the challenge of running 135 miles in the heat of Death Valley. AdventureCORP was not available to comment.

The 110 degrees comes from the National Institute for Occupational Safety and Health/ Occupational Health and Safety Administration. The new conditions by the National Park says, “The ESAT (event safety assessment team) considered possible mitigations for permitting summer events while keeping NPS monitors and event staff in compliance with NIOSH/OSHA heat stress limitations … Based on the heat index charts, average summer high and low temperatures, consideration of temperature differences for shade versus exposure to direct sunlight and radiant heat, the ESAT recommends that an ambient air temperature of 110 °F, recorded in the shade, to be the temperature limit for permitting sporting events. Summer events could be permitted at nighttime as temperatures do not exceed the proposed 110 °F (43 °C) limit.” This report can be read in full at http://www.nps.gov/deva/parkmgmt/upload/DEVA-Sporting-Event-Safety-Assessment-Final-8_20_14-1.pdf.