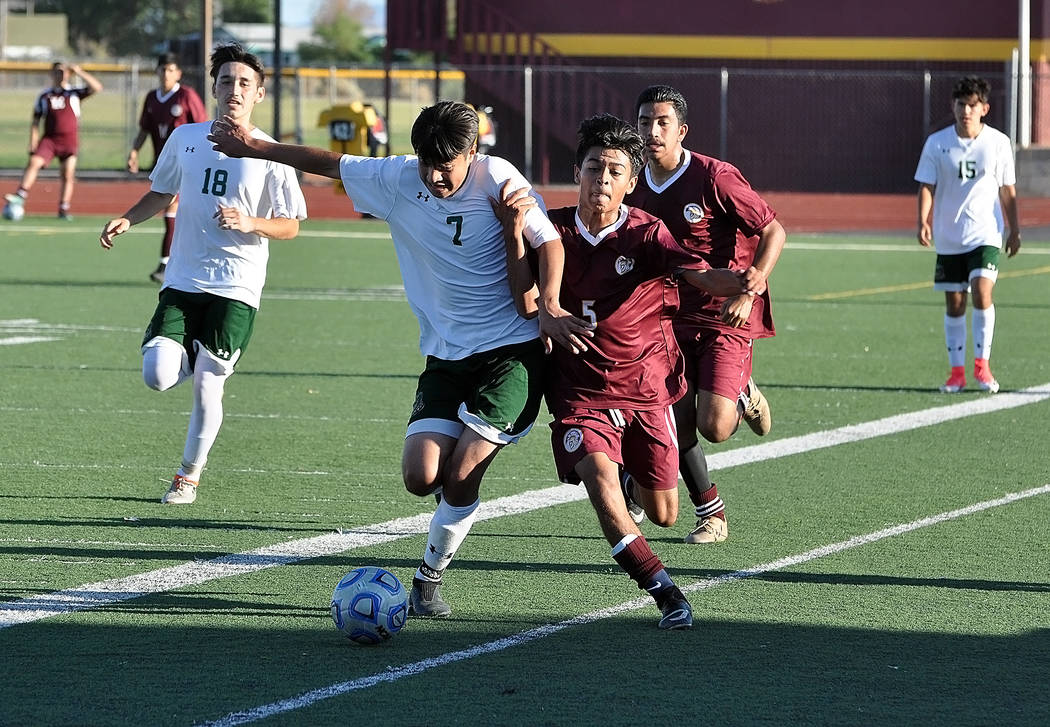 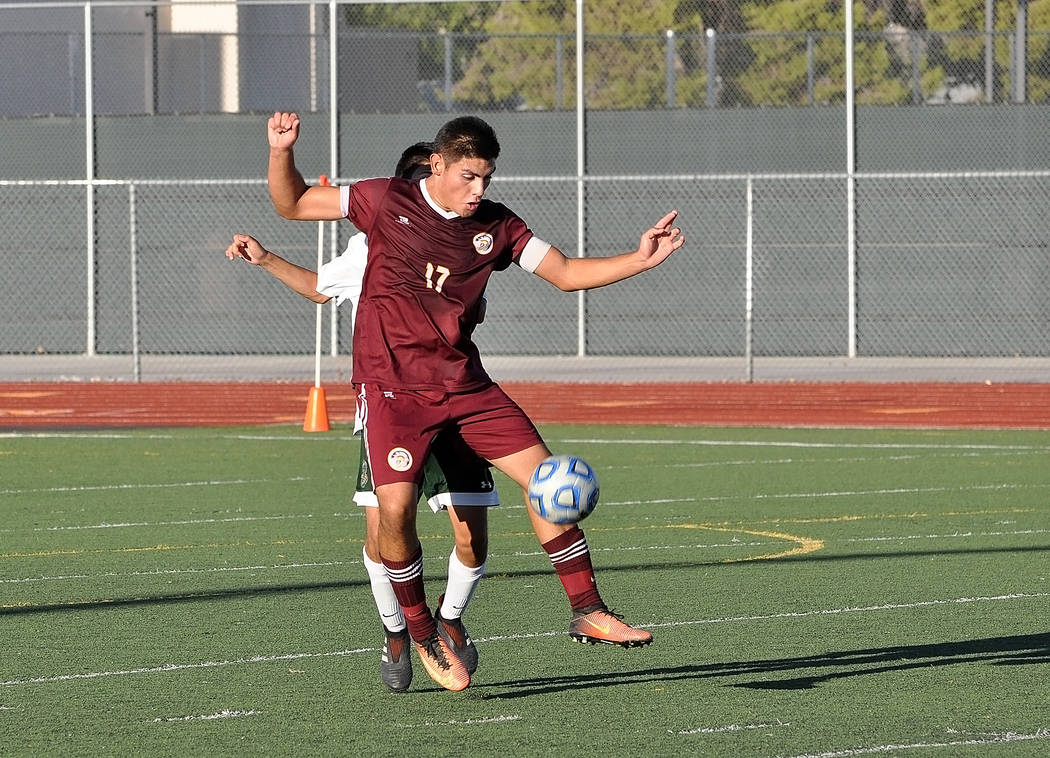 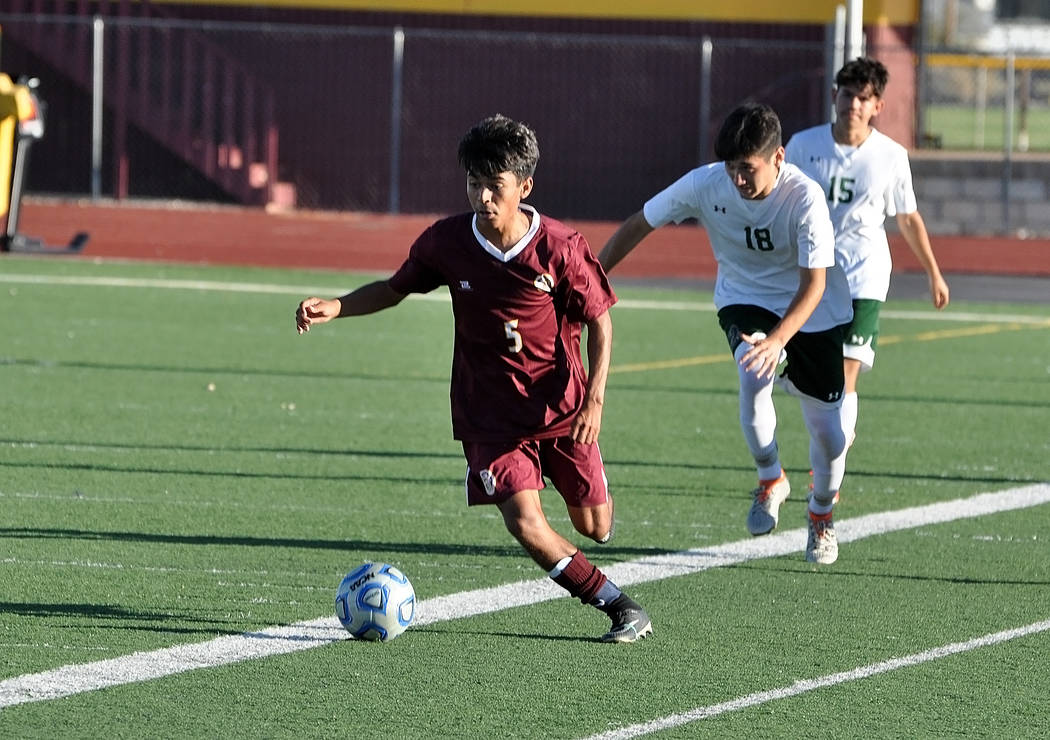 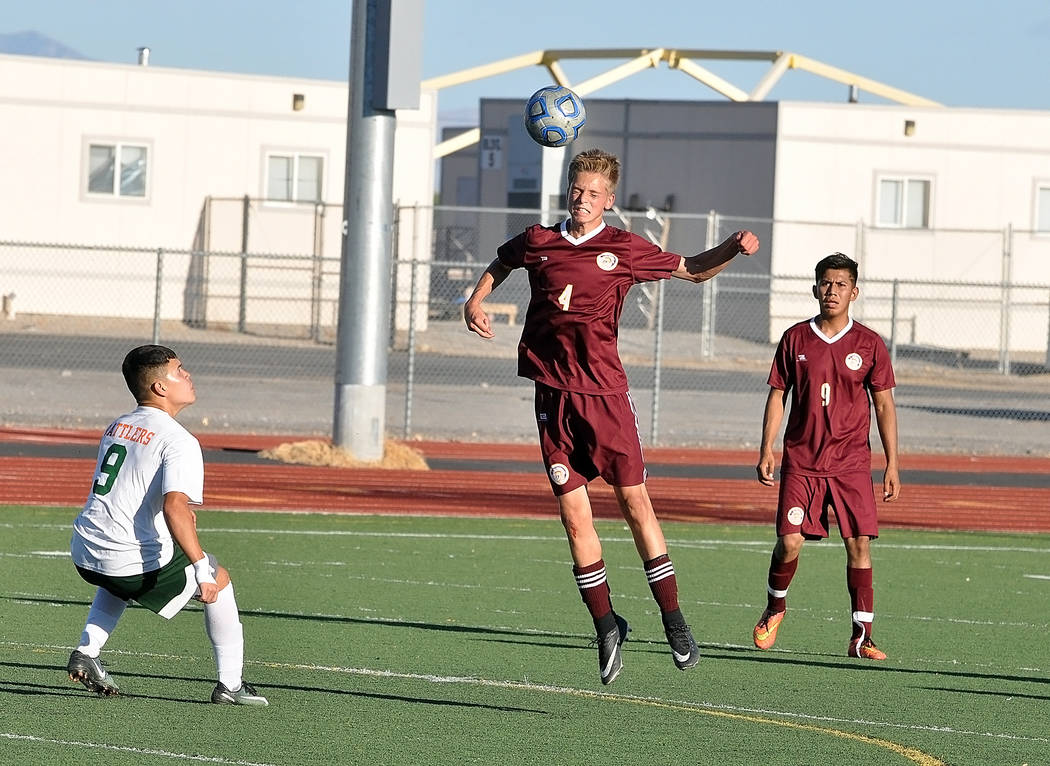 Horace Langford Jr./Pahrump Valley Times Sophomore Vincent DiBlasi goes up for a header Thursday during Pahrump Valley's 2-1 win over Mojave that opened Class 3A Sunset League play for the Trojans.

It was the kind of ending befitting a playoff game rather than a league opener, but it was no less satisfying for Christopher Vega and the Pahrump Valley High School boys soccer team.

The Trojan freshman scored off an assist from Alvaro Garcia in the final minute Thursday to give the Trojans a thrilling 2-1 win over Mojave in their first Class 3A Sunset League match of the season.

“Once I got the ball I just ran with it,” Vega said after the game. “Right when I saw the keeper, I just shot the ball. It just happened. It was really nerve-wracking at the end because we barely had any time left.”

From his vantage point, Pahrump Valley goalkeeper Ian Kingsley figured the game was in the bag.

Kingsley deserved to feel confident in the closing seconds, because for several minutes before that he was tested several times by the Rattlers.

“I don’t think I’ve ever been so excited in my life,” Kingsley said. “I had to have prayed at least 10 times.”

If the Trojans (3-3, 1-0, 3A Sunset) were praying for high-quality goalkeeping, they got it from Kingsley. And if they were praying for a bit of help from the crossbar, they got that, too, as they spent much of the second half clinging to a 1-0 lead.

In the 63rd minute, Kingsley made a solid save on a low-line drive during a sequence in which many players on both sides were not aware the ball was back in play. Less than two minutes later, a point-blank shot hit the underside of the crossbar.

Another diving save by Kingsley on a shot from 30 yards out preserved the shutout, and when a strong corner kick was headed over the crossbar moments later, it seemed as if the Trojans already had dodged their fair share of bullets.

But the Rattlers (2-1, 1-1) tied the game with about five minutes left, as senior forward Felix Perez scored his third goal of the season, sliding a shot on the ground just inside the far post to get the visitors on the board.

To hear the Trojans tell it, in the past they might have taken the tying goal as a punch in the gut, passed around blame and folded. But they say this is a different group.

“We actually work as a team now, and last year we didn’t really work together,” Vega said. “We’re stronger this year.”

“It’s that belief in the team, helping each other, never giving up, persevering and just doing their best,” Pahrump Valley coach Chris Robert said.

In the closing minutes, the Rattlers continued to press the issue, testing Kingsley from all over the field. Just two minutes after the tying goal, a rocket from 40 yards out-hit the crossbar.

“It definitely helped a few times,” Kingsley said of the crossbar. “I remember one that came at me, and I knocked it up and came off the back of the crossbar. If my foot wasn’t up, it probably would have bounced off my butt. It was definitely our friend tonight.”

While the crossbar did help the Trojans, Kingsley was outstanding, and he saved one of his best efforts for the final minutes. Moments after a potentially dangerous header went high over the crossbar, the junior keeper punched a well-struck shot high in the air, then alertly hustled to gather it in. Moments later, Vega’s goal set off a wild celebration.

The Trojans had taken a 1-0 lead less than five minutes into the second half when Fernando Martinez-Fontana scored after being set up nicely by Christian Gonzalez.

“Christian was able to run down that right line, and they kind of overcommitted to him a little bit, so he was able to push past them and take it to the end line and look across,” Roberts explained. “He was able to get that across, and Fernando was able to get a good finish. It was a good goal all the way through.”

While many of the players point to intangible reasons why this year’s team has a different feel, Roberts also has some more concrete factors in mind.

“For one thing, they are very well-conditioned,” he said. “We’ve got some new players that kind of completed what we needed, some people in the back have a bit of speed.”

“Our defense is a lot better this year, and I think we’re going to be hard to score on,” Kingsley said.

Indeed, after opening the season with losses against Palo Verde, Desert Pines and Centennnial, three Class 4A schools they faced with several players out of the lineup, the Trojans have allowed just two goals in victories over Virgin Valley, Boulder City and Mojave.

And yet, the intangibles keep coming back into the conversation.

“We’re a family,” Kingsley said. “Last year, it felt like we kind of got on each other a lot because we kept losing, but this year I feel connected. They’re my brothers, and I treat them like it.”

Pahrump Valley 7, SLAM Academy 0: On Monday, the Trojans (4-3) made it four in a row with an easy victory over the Bulls (2-6), a second-year team playing an independent schedule.