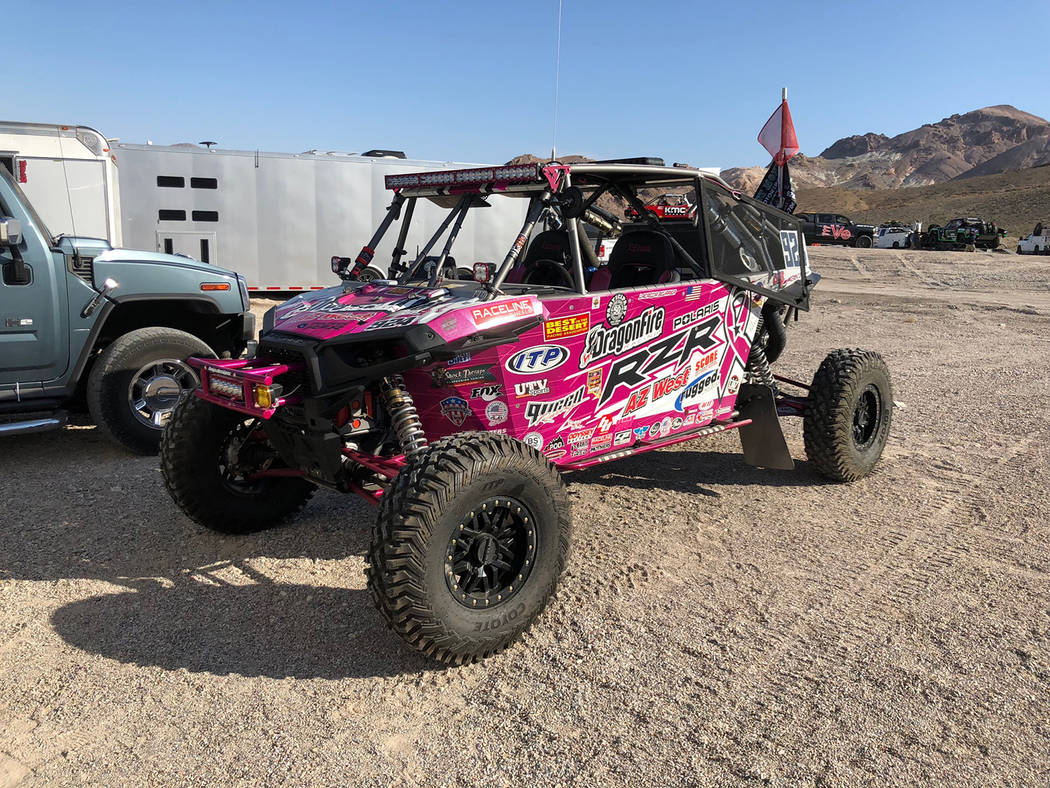 Tom Rysinski/Pahrump Valley Times Off-road racing vehicles gathered Saturday morning near Beatty for the start of the General Tire Vegas to Reno race, billed as the longest such race in North America. 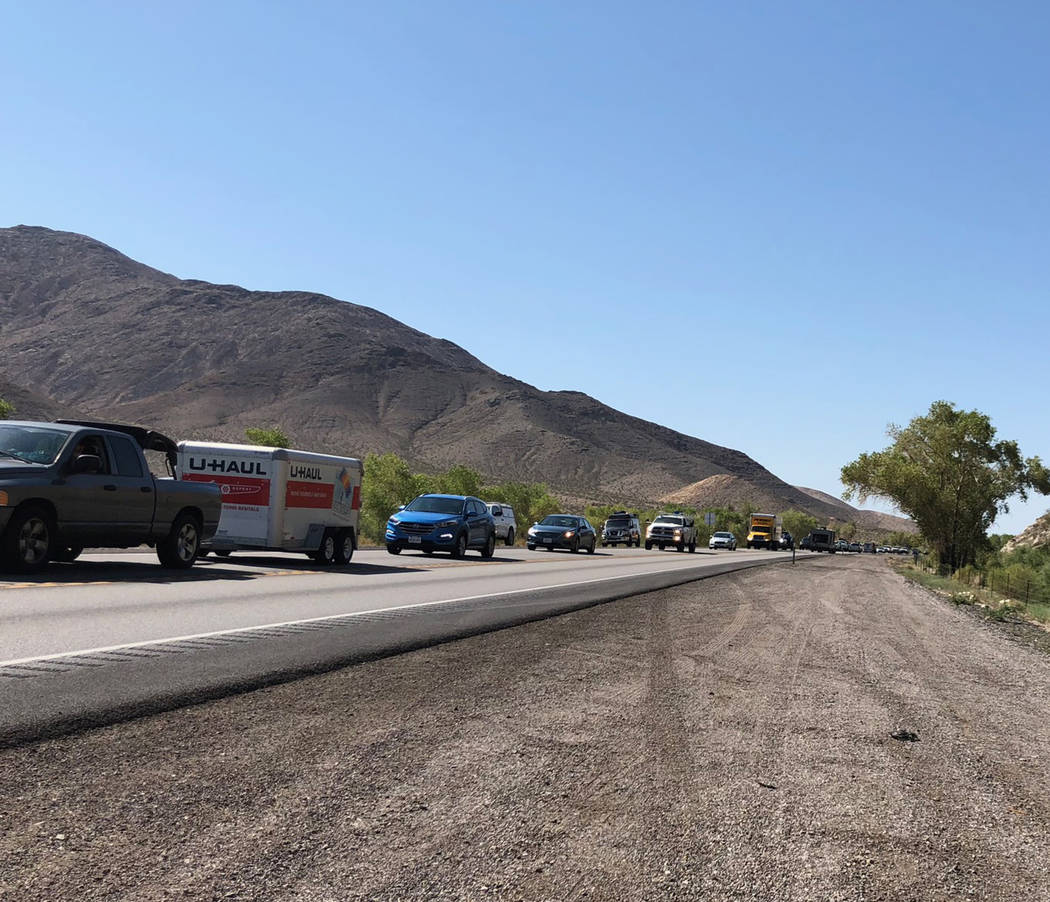 Tom Rysinski/Pahrump Valley Times A normally quiet stretch of U.S. 95 North leading into Beatty is backed up Saturday with traffic headed to the starting line of the General Tire Vegas to Reno race. 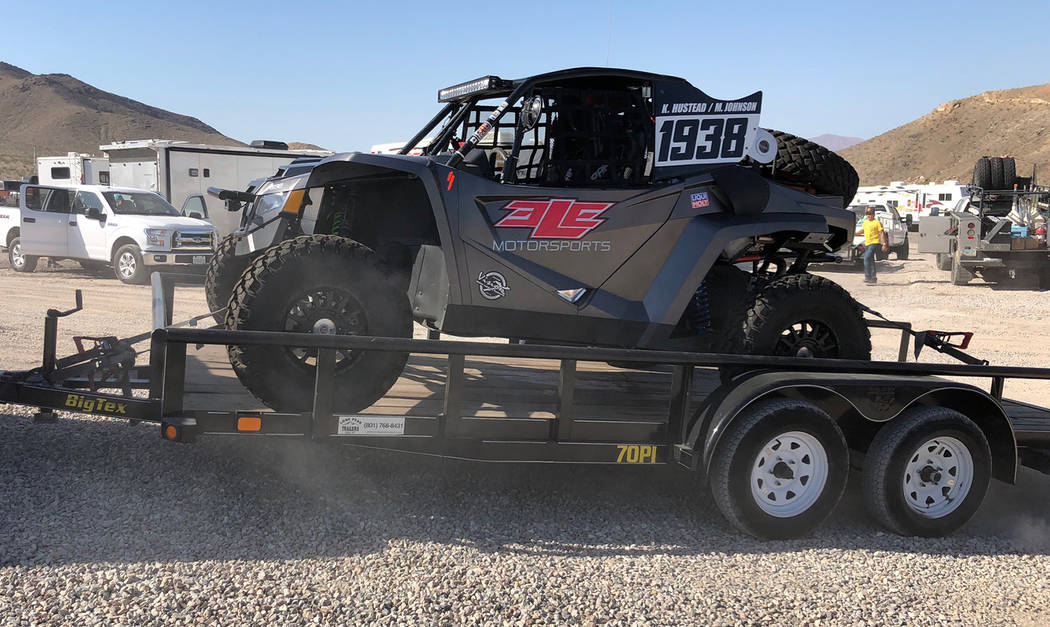 Tom Rysinski/Pahrump Valley Times As the starting time neared Saturday morning, many vehicles were still being brought to the staging area of the General Tire Vegas to Reno race outside Beatty.

None of that deters off-road racers from entering the General Tire Vegas to Reno race, which has billed itself as “The Longest Off-Road Race in the United States” for 22 years. It’s the flagship race of nine events run by the Best in the Desert Racing Association, even if it doesn’t actually go from Las Vegas to Reno. The start line this year was just outside of Beatty, the finish line was in Dayton, and it attracts drivers from all over.

Luke Erceg, for example, came all the way from Adelaide, Australia.

“This is our third race over here,” Erceg said from the staging area near the starting line just outside Beatty. “We bought the car last year. We’ve done the Baja 1000, Mint 400 and thought we’d finish it off with Vegas to Reno.

“We wanted to do three of the largest events we could find. This is our finishing one, so we’ll take the car home after this.”

Erceg had a fairly clear idea of what to expect from the course.

Justin Peck didn’t have quite so far to travel for Vegas to Reno. The Sandy, Utah resident is going on 30 years of racing experience.

“This is one of those epic races you just don’t miss,” Peck said. “It’s an amazing experience.”

That is saying a lot, coming from a driver who claims to have broken 84 bones and had 200 screws surgically inserted into his body over the course of 19 surgical procedures. But Peck, who has published a memoir detailing his struggles with depression and bipolar disorder, doesn’t do anything halfway.

“It’s the longest race in the states, and that’s what makes this thing fun,” he said.

Peck was driving in his fourth Vegas to Reno race, but the first in his new 6100 truck.

“This is our maiden voyage in this thing,” Peck said. “We qualified sixth out of 42 trucks, so we’ll be up in the front.”

Peck wound up ninth in his class, finishing the course in 10 hours, 23 minutes, 41.093 seconds, good for 39th overall. While that is almost 40 minutes behind class winner Nick Mills of Jonestown, Texas, nine of the 31 drivers in the class did not reach the finish line. But Peck knew he was going to have fun no matter where he finished.

“Racing with my friends is amazing,” he said. “That’s one of the best parts of it.”

Simply completing the course was Erceg’s primary goal. The Australian finished 15th out of 17 drivers in the 1000 Class, but five others did not finish the race. Overall, Erceg was 102nd out of 274 entries, with 103 not making it to the end.

“This car is very simple,” he said before the race, which began Aug. 17 and lasted into the next morning. “This is what we wanted. We didn’t want anything too complicated. We don’t anticipate being the quickest car out there by any stretch, but we traveled a long way so we’re purely here to get to the finish and get a finishing pin.”

The top eight trick truck competitors finished in under nine hours. Only one driver in another class turned that trick, as Brian Parkhouse of Long Beach, California, in the 1500 Class finished in 8:56:56.996.

There are two more races on the Best in the Desert calendar. The Method Race Wheels Laughlin Desert Classic will take place Oct. 11-14, while the Pahrump Nugget 250 is scheduled for Nov. 29-Dec. 2.