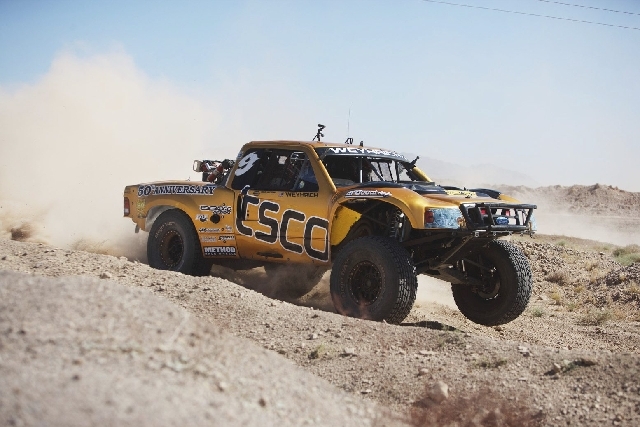 The Best in the Desert classic comes to Nye County on Aug. 16. The General Tire Vegas to Reno race is the longest off-road race in North America at 550 miles.

The race will start in Beatty and wind through some of the most scenic parts of the Mojave. It ends outside of Reno. The course covers part of the old Pony Express trail and starts at an elevation of 2,500 feet and crisscrosses elevations as high as 9,000 feet.

The race attracts 14 classes of off-road vehicles from motorcycles to trucks. This year there will be 270 racers.

According to Best in the Desert sources, Race Director Casey Folks has worked hard to keep the course from harming the environment. He worked closely over the years with the BLM to get permits and keep the environment intact.

Racer Mark Weyhrich who heads up his expert team in the Trick Truck Class returns this year to defend his title.

Weyhrich is a veteran racer from Portland, Ore., and has been doing this most of his life. He was also one of the original sponsors who helped Folks make the race what it is today.

His race is the premier class of off-road racing. The vehicles have 850 horsepower, three feet of ‘wheel of travel,’ 39-inch tires, a tube chassis on an F-150 pickup. The tube chassis is hand-built from the ground up. The engines are 454cc engines.

One of the unique things about the vehicle he drives is the tires.

“BF Goodrich produced our 39-inch, kevlar-belted tire for our truck. It is a racing-only tire. The reason we go with the kevlar, you can imagine how heavy the steel would be. The kevlar provides protection from the rocks and also dissipates the heat. It keeps the tires cooler. Otherwise with all the horsepower we would literally melt the tires off the truck in the back from just spinning the tires all the time,” he said.

Weyhrich says the race has grown in popularity. Sponsors come from all over to test their products to see if they can withstand the race.

To Weyhrich this is a hobby, but it does not mean he doesn’t take his racing seriously. He works full time for the family manufacturing business and takes time off to race.

“It’s like a second job for me. We have an office in El Cajon, Calif. It is an entirely separate entity from our corporate business. It is a marketing arm for our corporations,” he said.

Racing is in his blood. His father first started as a young man in a race similar to this one with a car like a sandrail. That was in the 1970s, when things were a lot simpler.

“My father heard about the race and started modifying his car,” Weyhrich said. “My father has said he is glad he got out when he did because he says we go way too fast and the machines are way too complex. My dad was the kind of guy that was about the adventure. You get out and work on the thing yourself. Things have changed quite a bit.”

Weyhrich is not saying the Vegas to Reno is not for the out-of-the-garage racers.

“The beauty of this race is it has so many classes,” Weyhrich explained. “That is the beauty of off-road racing. There is something for everyone. We are in the premier category. It’s the most expensive and the fastest. They have a sportsman category, and as long as the vehicle meets the specifications for safety, you can come out and race. You just pay your money. Yes, a guy out of his garage can come out. He is not going to win the race overall, but he can come out and win in his class and have a good time. It is not like road racing where you have to qualify and get a license. It is extremely accessible.”

Weyhrich is out to win it. He has five full-time workers and 40 part-time volunteers who help out with each race. He said this is an all year long deal.

“To put a truck on the track and race it for the full series (eight races) and do it right costs you $1.5 million a year. The five full-time guys take care of all the race cars, and the fleet of other cars and a 12,000-square-foot facility in San Diego. The guys’ jobs are to manage the stuff and keep it ready for the race. We have a helicopter pilot. My brother and I just fly in and race, which is nice,” Weyhrich remarked.

Weyhrich says he drives the truck during the race and he has a navigator with him. His navigator is Ryan Williams, who has been with him for the past decade.

“He is the top prep guy in all of the sport,” Weyhrich said. He has grown up around it. This is the only job he has ever had. He started off sweeping floors.”

He said there are a huge variety of guys on the team and it is the volunteers in this sport that really make it work.

The pressure to win is great and always there.

“I deal with the added pressure to win,” the racer said. “You just do it. If you don’t have the drive to win, then you should not be out there. For me, that is the way I think about it. I have never been in racing to just go out and have a good time. I am competitive in business and competitive in racing. I am out to win and everyone on the team is out to win, and that is what we focus on.

For Weyhrich there are many good competitors in this race but he considers the top racer to beat to be his brother, Gary.

“We feel that we have the best team out there. My brother drove this race last year and he won. My brother and I have three wins in this race combined. He certainly is one to beat,” he concluded.