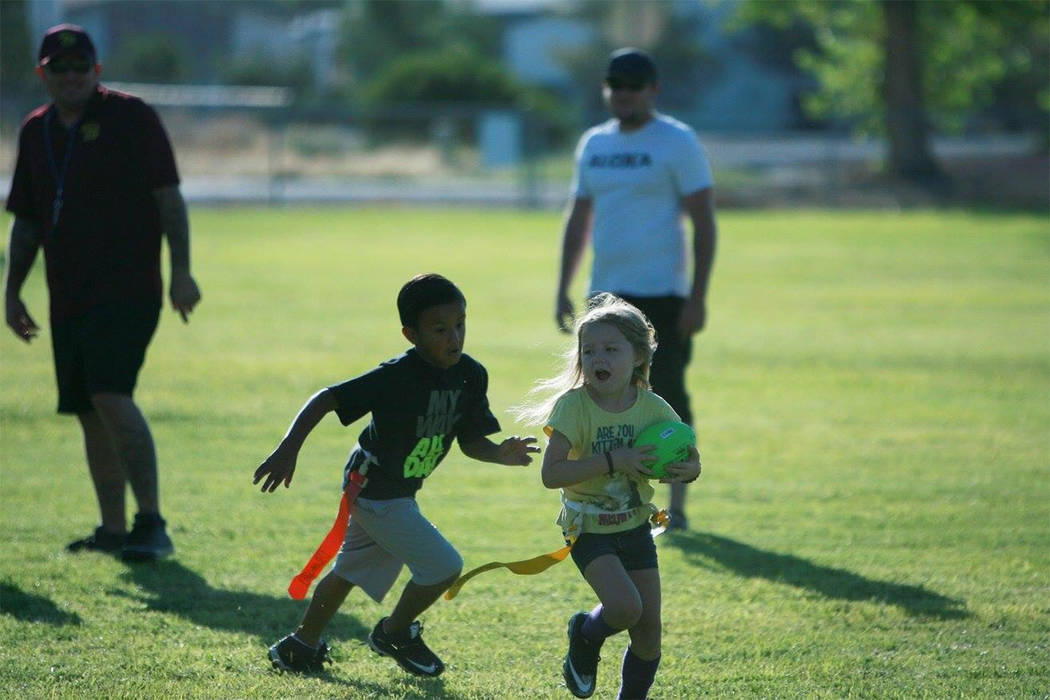 Desiree Castaneda/ Special to the Pahrump Valley Times Marshawn Lynch, watch out girl! Farra Hudgens, who plays for the Trojan Spear, runs for some tough yards at the flag football scrimmage at Simkins Park last Saturday. 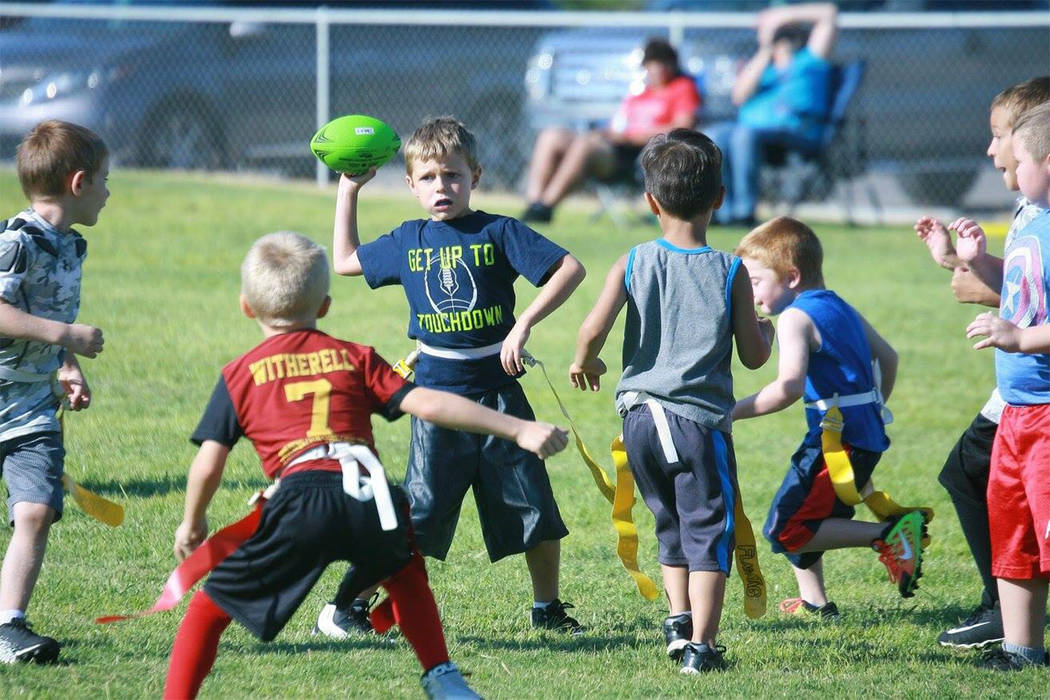 Desiree Castaneda/ Special to the Pahrump Valley Times Stetson Brown for the Trojan Sword drops back for a pass and avoids a fierce pass rush in last week’s game at Simkins Park. The flag teams are in Henderson this week to open their season. 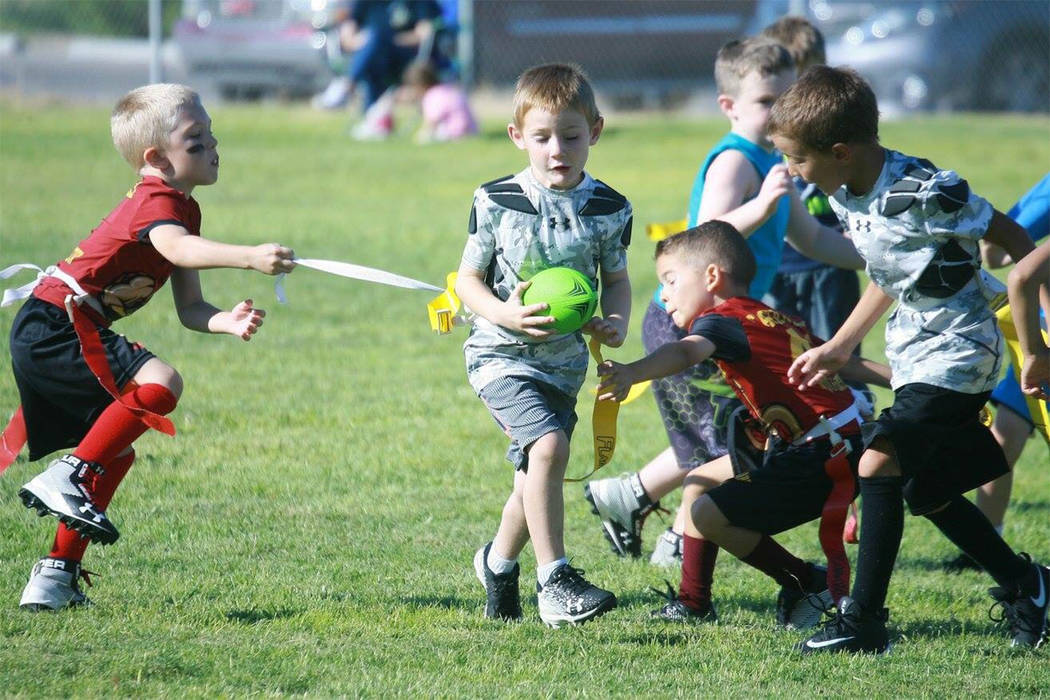 Desiree Castaneda/ Special to the Pahrump Valley Times Bentley Shannon for the Trojan Sword with the ball; Conner Witherell, left, and Cade Castaneda, right, going for the flags. Castaneda and Witherell both play for the Trojan Shield. This was a scrimmage for the three Pahrump flag football teams on Saturday.

Yes, youth football is certainly here and going strong in Pahrump. It is a relief to see these little guys go at it after I saw the foul stench of youth sports raise its ugly head in high school football.

I am referring to the Basic High School and Canyon Springs game, where the benches on both teams cleared after the game. But before I get into that, on to youth football in town.

Pahrump youth football, what a breath of fresh, clean air. You know our youth football league changed last year. They switched from Pop Warner to the National Youth Sports League. Pop Warner football folded last year in Las Vegas because basically, it refused to change with the times and make parents happy.

In my opinion, it was a change for the good and Johnny O’Neal, president of the Pahrump National Youth Sports in this town, has done a good job getting things going. O’Neal is promoting good, clean fun and deserves some credit for keeping youth football here in town.

To me, youth football is such a breath of fresh air. The parents try hard to keep the negative aspects of the sport from creeping in here in Pahrump. It takes work though, and we are not all saints here, but we try.

That being said, enjoy the summaries given to me from the NYS on last week’s games. I intend to do this as often as possible, space permitting. AYSO, I would love to hear from you.

The Pahrump Trojans 13 and under team defeated the Boulder City Eagles 16-0 at Rancho High School.

Hunter Otteson scored two TDs to help and rushed for 88 yards to help his team defeat the Eagles. He scored on a 20 and an 11-yard run. The team rushed for 116 yards. The defense also had a great game, allowing only 73 yards total. On defense, Austin Sandoval had a fumble recovery and Otteson had an interception.

The 11U Trojans defeated the Moapa Valley Pirates 28-8 at Rancho High School and were led by River Cable, who passed for a touchdown and scored a safety on Saturday. He was helped by Gunner Cortez, who scored a TD and also passed for one.

The two TD receptions were made by Cortez and Brennen Benedict.

Pahrump had two rushing TDs by Chase Otteson, who scored on a four-yard TD run and Benedict on a 15-yard run. Overall the Trojans had 247 yards rushing and Benedict had 174 of those yards to lead the team. The defense only allowed 31 total yards.

The Las Vegas Badgers defeated the Pahrump 9U Trojans 20-12 at Rancho High School on Saturday.

The Trojans scored in the second half after giving up 20 points to their opponent. QB Kayne Horibe scored on a 32-yard TD run to make the score 20-6. Then in the fourth, Ashton McClard had a 16-yard TD run to make it 20-12. Kayne Horibe was the leading rusher for the Trojans with 108 yards. On defense, Jace Wulfenstein had a fumble recovery and an interception for the team.

The youth football flag teams are growing. This season they have three teams, the Trojan Sword, Trojan Shield and the Trojan Spear. The teams had a scrimmage at Simkins Park in Pahrump.

“It went well,” he said. “We had all the teams present. Definitely glad we did it. It gave the kids the notion of the objectives around marching down the field and gave coaches an understanding of the amount of time that can be drained if you don’t have a plan.”

Yes, there is a competitive spirit here, but nothing like whatcame out of Las Vegas last week as two high school teams, Basic and Canyon Springs, went at in a full-on brawl that cleared both benches after the game. This made the national news. I just saw the story out of Miami. That’s not a face of youth sports that I ever want to cover in Pahrump. I think if it ever gets that way here, I will hang up my cleats and go write Harlequin romance novels or something like that.

All kidding aside, the Nevada Interscholastic Activities Association handed out its punishment for the brawl on Wednesday. This was an embarrassment for all of Southern Nevada. Coaches from all teams, from the 6U on up to high school should point to this and talk to their teams about this. This should not have happened. Both teams had to forfeit last Friday’s game and this week’s game, according to the NIAA.

I think that this was not enough. Both teams should forfeit the entire season and the coaches should lose their jobs. There is no excuse for any of that behavior in youth sports or any sport for that matter and it should not be tolerated at the high school level.