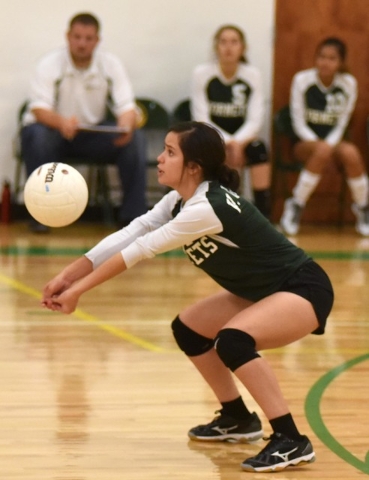 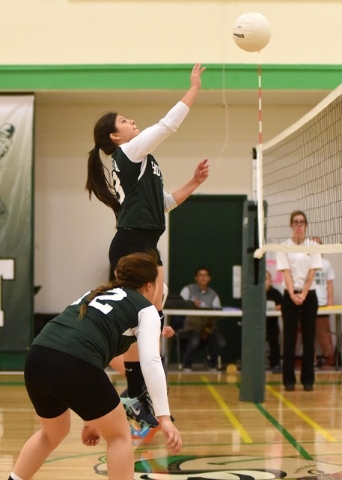 Richard Stephens / Pahrump Valley Times Karina Villanueva gets a tip during the Green Valley Christian match in Beatty on Tuesday.

The Hornets were led by Vanessa Gamboa and Bridget Vieyra. Gamboa had nine aces and four kills, and Vieyra came off the bench and had three aces and five kills.

In addition to Gamboa’s nine aces, “she served up nine straight points, seven of those were aces,” Hornets coach Steve Sullivan said.

Sullivan said the rest of the team’s serves were off, and so Gamboa saved the day.

Despite the hustle of these two players, the coach said his team could play better.

“Though the scores say a different story, the team overall seemed to struggle,” Sullivan said. “We had 16 service errors, which is very high for us and we only averaged about 12 attack attempts per set on offense. Our next game is our first league game and I’m curious to see how these girls will respond.”

As far as the defense for the day, Sullivan said it was hard to evaluate his defense.

“GVC was struggling to get their offense going to produce a consistent attack,” the coach said. “Our girls seemed to have taken that as an opportunity to relax on defense because too many times we got flat-footed with a ball landing in front of us, or out of position to control the pass.”

The girls host Indian Springs (4-1 overall, 1A Southern) on Friday at 5 p.m. to start league play.