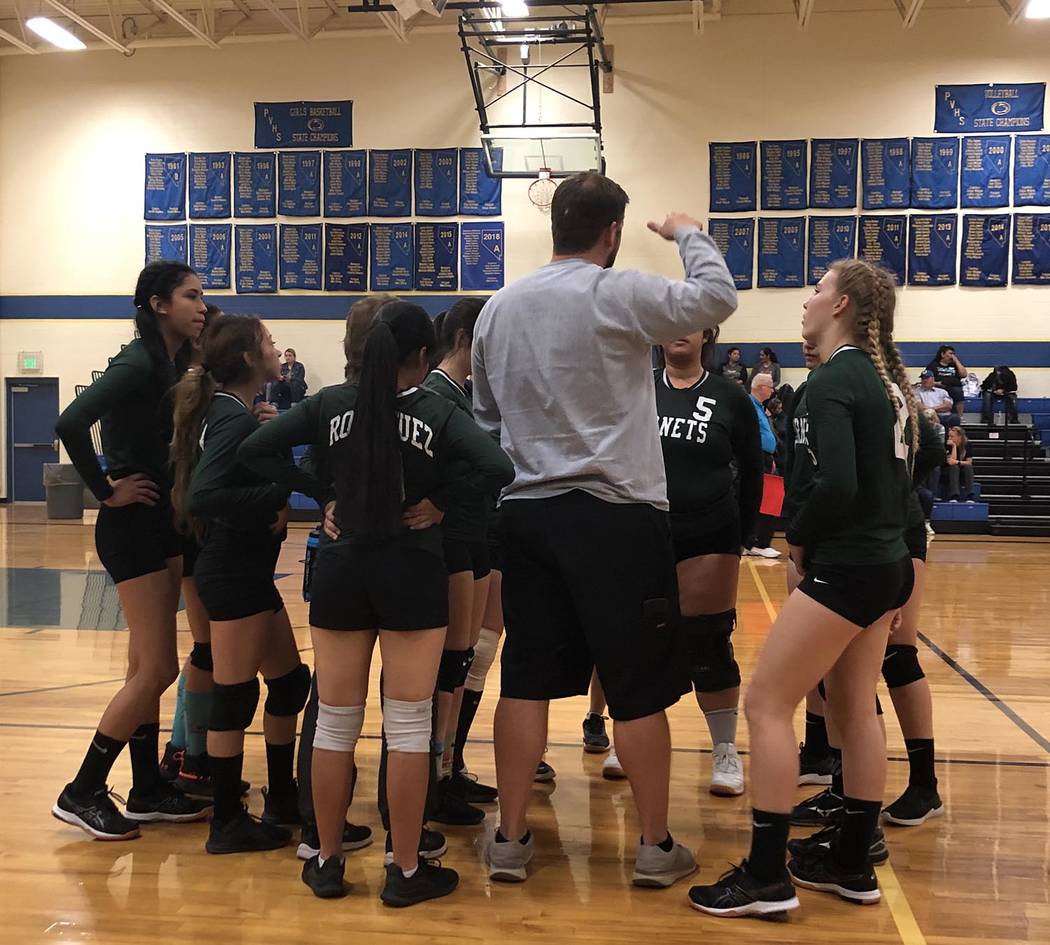 Tom Rysinski/Pahrump Valley Times Beatty High School girls volleyball coach Steve Sullivan talks to his team during a timeout at the Class 1A Region II Tournament on Friday in Alamo. Owyhee defeated the Hornets in three sets to advance. 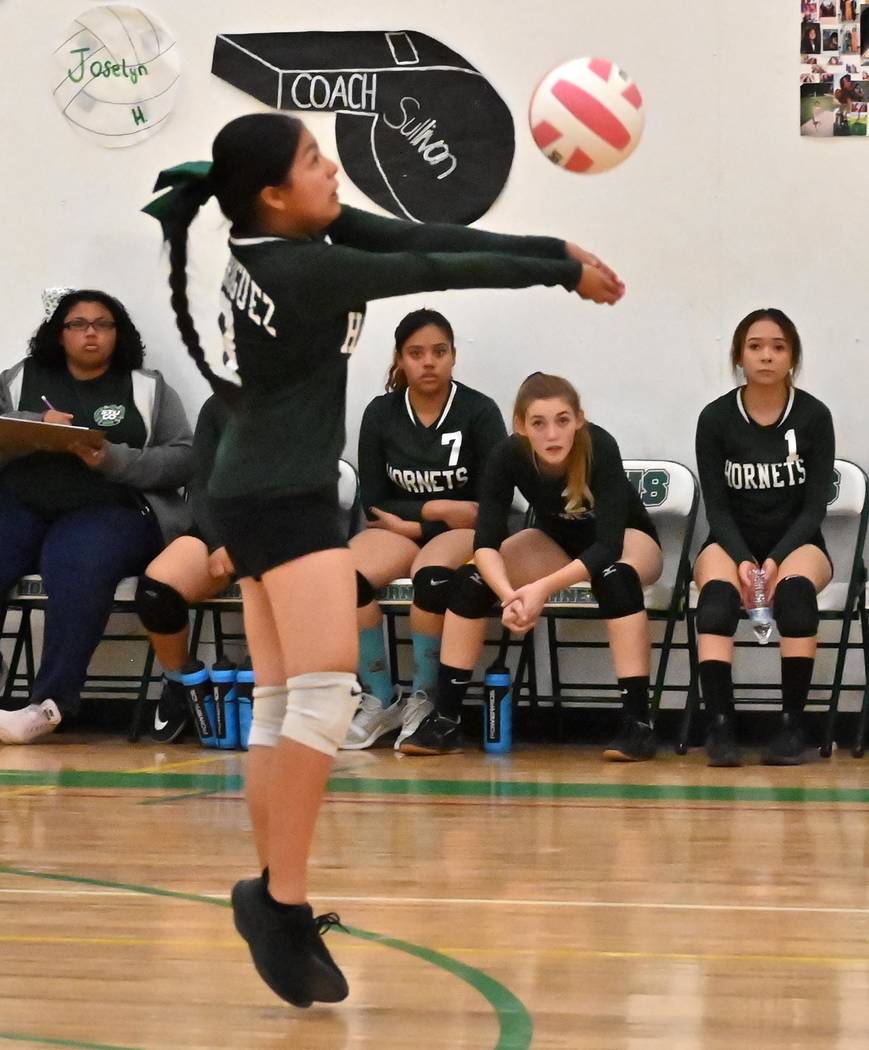 Richard Stephens/Special to the Pahrump Valley Times Aniram Rodriguez, one of three seniors on the Beatty High School girls volleyball team, bumps during the Hornets' loss to Pahranagat Valley in the regular season finale Nov. 1 in Beatty. 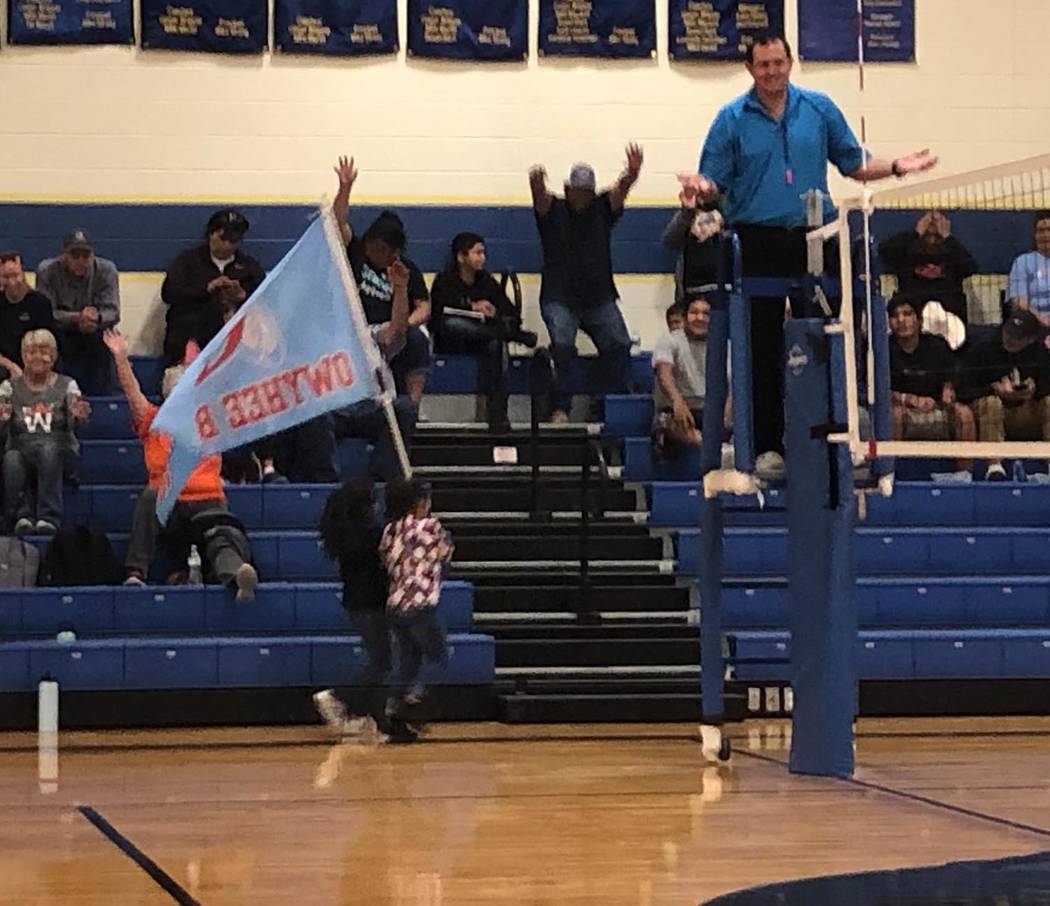 Tom Rysinski/Pahrump Valley Times Two of the smallest Owyhee fans show their support for the Braves during the Class 1A Region II Tournament quarterfinals on Friday, when the Braves defeated Beatty 3-0.

With his team down 2-0 to Owyhee going into the third set Friday, Beatty High School girls volleyball coach Steve Sullivan had a simple message for his team.

“Stay positive,” Sullivan said he told the Hornets. “Go out there and give them a fight.”

And the Hornets responded, playing a tight set against the Braves and taking leads of 16-12 and 19-16. But a mistake here, a bit of bad luck there and some solid Owyhee serving down the stretch added up to a 25-21 win and a 3-0 sweep of the Class 1A Region II quarterfinal match at Pahranagat Valley High School.

Sullivan said the seeds of the early exit were sown the previous week against the tournament hosts in the regular-season finale in Beatty. The Panthers dominated, winning 25-9, 25-22, 25-8 to lock up the No. 2 seed in the Southern League and dropping the Hornets to No. 3, setting up their opening region match against Owyhee, the No. 2 seed from the North.

“Friday against Alamo we just had a horrible showing,” Sullivan said. “Even in the second set when the score was close, we weren’t playing like we’re supposed to play. We had an honest talk at Monday’s practice about maybe we have to be more focused on enjoying the ride, having more fun out there.”

That might seem like an odd attitude to take into a tournament situation, but clearly Sullivan knows his team.

“It just seems like every time we confront a challenge we kind of back off and play a little scared,” he continued. “So our focus needed to be positive, have some fun today and whatever happens, happens.”

The Hornets also had an idea of what they would be facing against the Braves.

The first set was tight most of the way. In fact, the first time either team led by as many as four points — Owyhee took a 16-12 lead — the other came right back, as the Hornets pulled even at 16-16, leading the Braves to call a timeout.

But just when the Hornets were feeling good about their chances, the Braves pulled away, and junior Cameron Paradise’s kill sealed a 25-18 win for the Braves.

That led Sullivan to remind his team about having fun on the court, and the Hornets responded with a strong effort in the third set.

Although the Braves (18-8) are a strong opponent that will be playing in the Class 1A State Tournament this weekend in Las Vegas, Sullivan was disappointed with the defeat.

“This isn’t how I saw our season ending,” he said. “I personally am going to have to take the offseason and re-evaluate some of the things we do in practice and what we do in the offseason and hopefully show up as a different team, a more competitive team, a team that wants to go out there and win and not back down from a challenge.”

The Hornets have only three seniors, and Adriana Gil is the only senior starter, so there will be a lot to build on next fall. Meanwhile, Owyhee swept Southern League champion Green Valley Christian in the semifinals before losing to host Pahranagat Valley in the region final.

Owyhee and Pahranagat Valley will join league champions Virginia City and Smith Valley from the Region I tournament in Virginia City in the state tournament, which will be held Friday and Saturday at Faith Lutheran High School in Las Vegas.