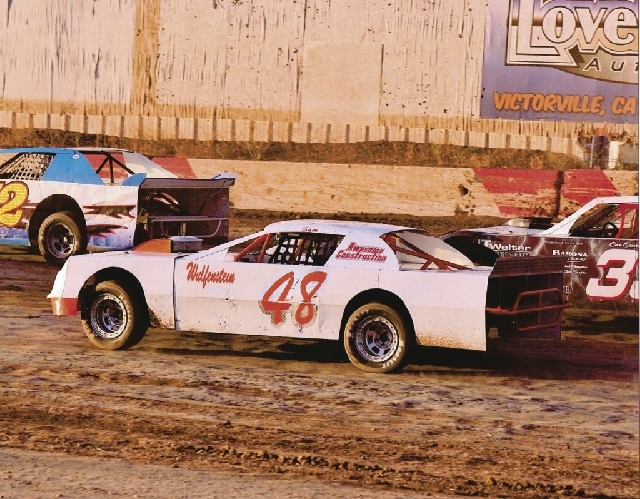 Regardless of the weather, the race went on and those that stayed got a real treat.

Widow and race organizer Sheree Stringer said the race was fantastic. She said those that waited out the hour-and-a-half rain delay were not disappointed.

The 48-lap main event went down after a little rain. Stringer said the rain was so hard it made the track “slicker than snot.”

She said the high winds rolled in after the heat races. The stands were packed, but then the rain came and the big race was delayed until 11 p.m.

About a quarter of the crowd left due to the seasonal monsoon.

“I feel sorry for those that left because the race was the best ever. It was really exciting,” she said. “The winds were so strong, though, that people got pummeled by sand and it felt like dermabrasion. That is how strong the winds whipped the sand into the stands.”

The main event is in the Super Stock class. This year there were 20 cars in the event.

Levi Kiefer defended his crown from last year and took home the $1,500 prize. Jason Pike came in a close second.

“The race was so close, it looked as if Pike was going to take it in the end,” Stringer said.

Stringer said her sons were very pleased with the results. Joshua was able to place driving Sam’s old No. 48 car. It was Joshua’s only appearance this year at the speedway.

“I was worried it would break down again. I even brought an extra axle for the car. Last year it broke down and I didn’t even get to race. This year I worked on the car myself and was able to put more time and preparation into the car,” he said.

Joshua was thankful his brother gave him the use of the car and said they are competitive, but not to the point they don’t help each other out.

The third place did surprise him though because he was only able to race a little bit in Las Vegas at the beginning of the year.

When Joshua is not racing he works as a mechanic for Valley Electric Association in Pahrump.