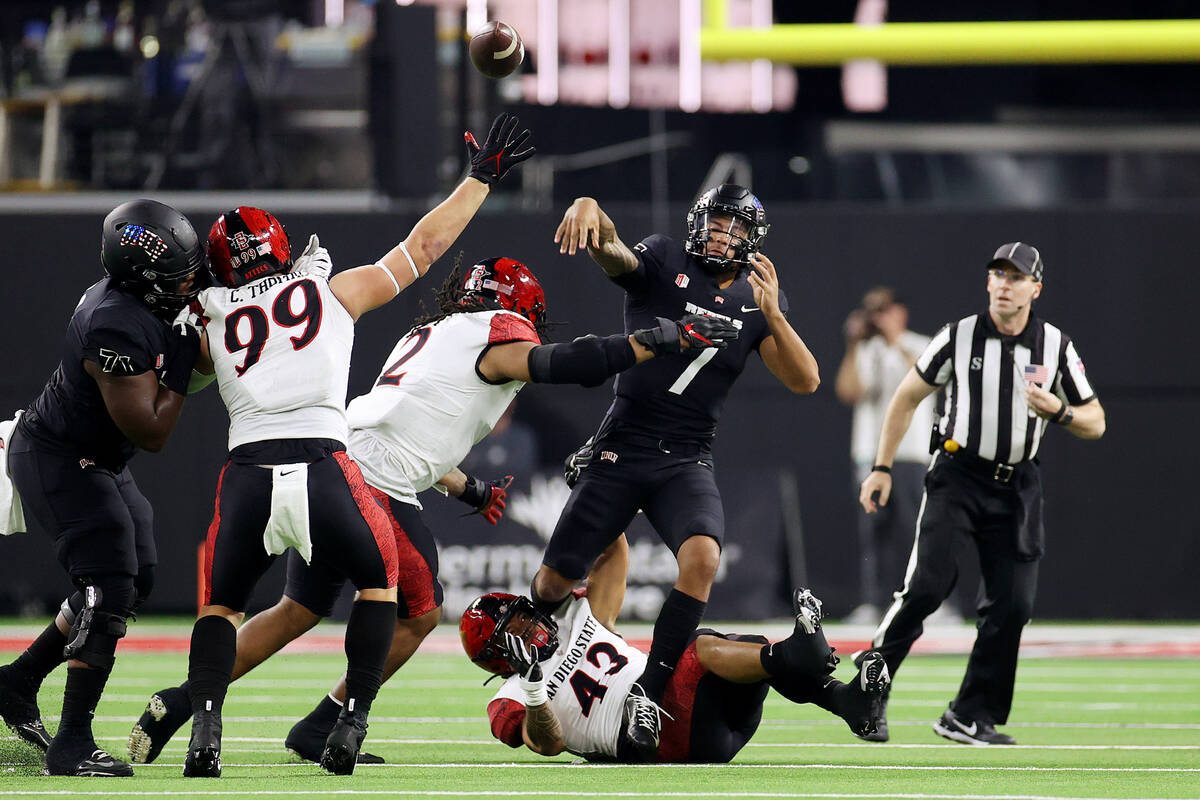 The Rebels looked very strong defensively for most of the first half. The Aztecs were forced to punt on their first three drives of the game.

After getting a field goal on their opening possession of the game, the Rebels were unable to get the ball moving. Over the course of their next three drives, the UNLV offense combined for just 10 yards and found themselves trailing 7-3 due to an interception by the Aztec defense that was returned for a touchdown.

Freshman quarterback Cameron Friel was injured early in the second quarter when he was sacked by Aztecs senior defensive lineman Keshawn Banks.

With Friel out, and Doug Brumfield still dealing with an injury, it was Justin Rodgers’ time. The junior quarterback finished the day completing 15 of his 21 passing attempts for a career-high 305 yards. He also had two passing touchdowns to go along with his monster day.

Following a career day on the field last week, senior running back Charles Williams managed to gain just 35 rushing yards on his 16 carries. He did, however, have three catches out of the backfield for 59 receiving yards.

Rodgers’ favorite target of the day was Steve Jenkins. He tied for a team-high with five catches and had a career-high 176 receiving yards. Zyell Griffin and Giovannio Fauolo Sr. each caught a touchdown for the Rebels offense.

Griffin’s 43-yard touchdown catch from Rodgers gave the Rebels a 10-7 lead with just over six minutes before the half. Even though it was UNLV who got on the scoreboard, this is the point where the Aztecs offense started clicking.

Aztecs quarterback Lucas Johnson had a career day himself. He finished the game completing 18 of his 24 pass attempts for 192 yards and a career-high three touchdown passes.

Two of Johnson’s three touchdown passes came in the last three minutes of the second quarter. These two scores gave the Aztecs a 21-10 lead going into halftime.

The third quarter was all UNLV. They were able to outscore San Diego State 10-0 and cut their lead to just one point with a score of 21-20. However, after UNLV’s field goal that cut the lead, they went three and out on their next two possessions and the Aztecs scored to increase their lead to eight, 28-20.

In a rush to get down the field, Rodgers threw an interception with less than two minutes to play, which sealed the game and the Aztecs ran the clock out.

UNLV’s final game of the season will take place this Friday, Nov. 26, when they travel to Air Force to take on the Falcons. Air Force is coming off of a three-overtime victory over the Nevada Wolf Pack.