When the Pahrump Valley High School football team takes the field tonight in the first round of the Class 3A South playoffs, the Trojans will be playing for the winningest coach in school history.

Thirty wins might not seem like a lot for a career as a head coach, and in some ways, it’s not. But when the Trojans held off Valley 44-36 on Oct. 24, it gave Joe Clayton his 30th victory at the helm, snapping a tie with Al Giannotti.

Giannotti coached from 1976-1981, going 29-21 — the only coach in school history with a winning record. Giannotti’s best season was 1978 when the Trojans went 9-1 against a schedule that included Indian Springs (twice), Lincoln County and Tonopah before beating Moapa Valley 3-0 and losing to Pershing County 18-0 in the playoffs.

If that playoff win rings a bell, it should. It was the only one the Trojans had before last season. Only one playoff win. Ever. In more than 40 seasons of football.

In a state in which making the playoffs is not that hard in many years (sometimes four out of five teams made it, depending on the alignment in a given year), that was a long and depressing drought.

The Trojans went 7-2 two years later, then 2-6 in 1981 and Giannotti was done, surely not knowing that his 29-21 record would be the gold standard of Pahrump Valley football for decades.

While Clayton still has some work to do to get over the .500 mark — he is 30-38 as head coach — it’s safe to say the school’s football fortunes have changed. This season marks the fourth consecutive year Pahrump Valley has been in the playoffs. The only other time that happened was 2003-06 under Steve Nygaard for three seasons and Brian Hug for one.

But those four teams combined for a record of 15-23. With at least one playoff game to be played, the current four-year record for the Trojans is 21-19.

Winning records have been hard to come by in Pahrump, so Clayton coaching the Trojans to two of them, including their first league title since 2005, is a bigger deal than it might appear to fans of schools with stronger football histories. Pahrump Valley began playing football in 1973 and has managed just nine winning seasons. The Trojans (4-5) would have to reach the Class 3A state final to get their 10th this year.

Again, making the playoffs just isn’t that hard most seasons. This year, three out of five in the Sunset League made it.

Which means that while making the playoffs is considered a sign of success, last year’s league title and winning records in two of the past four years are more significant accomplishments in the context of Pahrump Valley football. 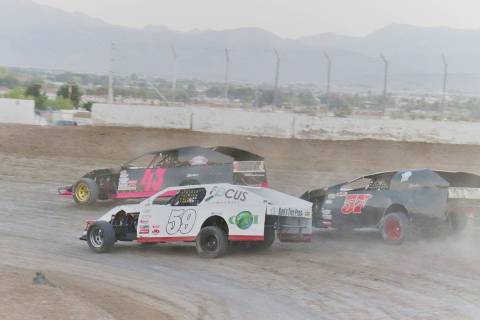 Jared Ward was the only points leader to win his race Saturday night, taking first in the Hobby Stock class to extend his season lead to 44 points Saturday night at Pahrump Valley Speedway.

Tails of Nye County presented Dr. Suzanne Zervantian with a commemorative plaque Aug. 1 to thank her for her work at the organization’s 2020 Spay and Neuter Clinic.

When the Nevada Interscholastic Activities Association announced a dramatic pandemic-induced revision of the athletic calendar for 2020-21, the response was a mixture of disappointment, relief and happiness.

A lot of kids playing youth sports dream of playing professionally. Each time they go in the batter’s box, they fantasize about the World Series. Each time they step up to the free throw line, there are 3 seconds on the clock in Game 7 of the NBA Finals. And each putt is the 18th green at Augusta.

Pitching horseshoes above 7,000 feet is not like playing baseball at Denver’s Coors Field.