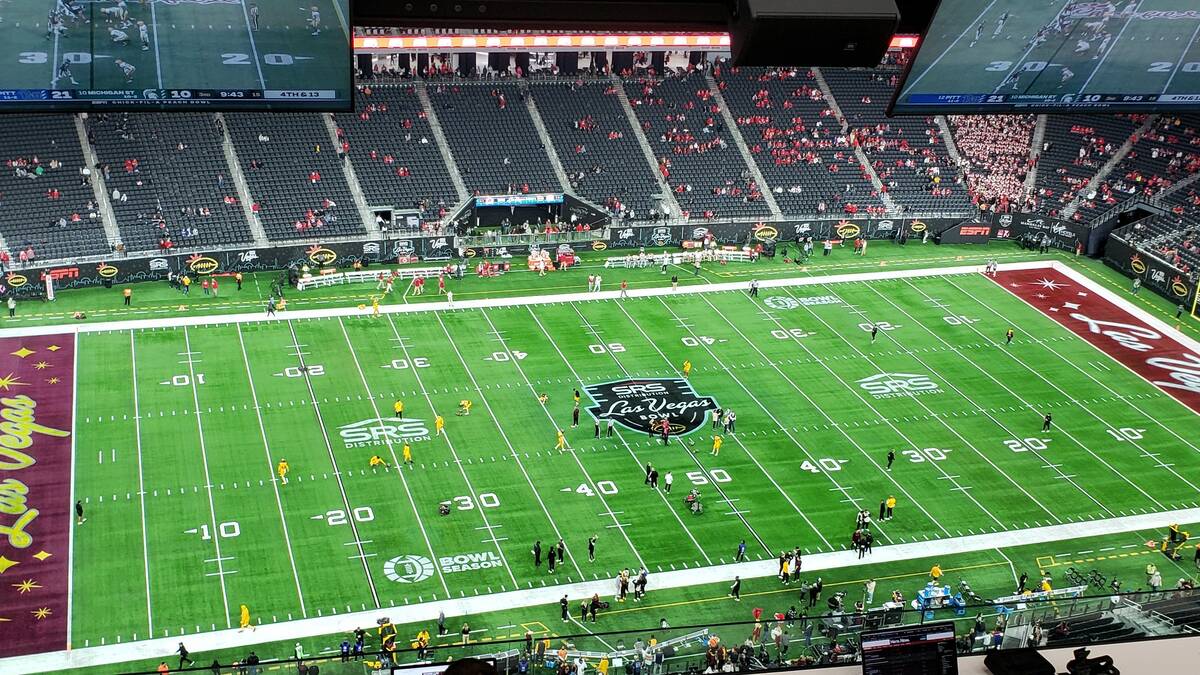 This was the first matchup between these two teams since the Badgers came away with a 20-19 victory during the 2010 season. That same season was also the last time Wisconsin visited the city of Las Vegas.

For the Sun Devils, this was their second appearance in the last four seasons at the Las Vegas Bowl. Their last time out, Arizona State lost 31-20 to the Fresno State Bulldogs.

On Thursday, the Badgers got off to a hot start.

On ASU’s opening drive, the Badgers defense was able to sack quarterback Jayden Daniels for a huge 13-yard loss. Then, on the very next play, they intercepted Daniels in Sun Devils’ territory.

Wisconsin’s offense took very little time to get on the scoreboard. Thanks to a 31-yard pass from Graham Mertz to Markus Allen, the Badgers were down to the 8-yard line on just their third play of the game.

Fullback John Chenal punched the ball in on the very next play to give Wisconsin a 7-0 lead.

The remainder of the first half was the Braelon Allen show.

Allen, who is a 17-year-old true freshman this season, finished the first half with 12 carries for 101 rushing yards, including a 43-yard rush to set up Wisconsin’s second touchdown of the game. Allen had one less rushing yard in the first half than the entire Arizona State offense had for their first half.

The second half didn’t quite go like the first half, however, he finished the day with 29 carries for a game-high 159 rushing yards.

The Badgers went into the locker room with a 20-6 lead over the struggling Sun Devils.

The second half was all Arizona State.

Something was said during halftime that kicked the Sun Devils into gear in every facet of the game for the third and fourth quarters.

The Wisconsin offense didn’t gain positive yards until their last drive of the game in the fourth quarter. Before that drive, the Badgers had exactly zero yards in the second half.

Arizona State made the best of their first drive in the second half. With the help of a 38-yard pass from Daniels to wide receiver Ricky Pearsall, the Sun Devils were able to score a touchdown and cut down the Badgers lead to just 7 points, with a score of 20-13.

After both teams exchanged multiple punts, Wisconsin received the ball on their own 3-yard line with just under 10 minutes left in the game. What happened next for the Badgers offense was nothing short of perfect clock management.

After not gaining a single positive yard the entire second half, the Wisconsin offense took the ball on an 18-play, 90-yard drive that took the entire 9:57 that was left on the game clock.

This was arguably the single greatest non-scoring drive that has ever occurred in football. To be able to hold onto the ball for nearly 10 minutes to end the game, after having the ball for a combined 7:27 on the three previous drives, it deserves a chef’s kiss.

The Badgers went on to defeat the Sun Devils by a score of 20-13 and Allen was awarded with the MVP trophy for his performance. We’re going to be seeing plenty more of this kid over the next three to four years and all eyes will be on him to see if he’ll be able to put together a Heisman trophy winning season while he’s with Wisconsin.