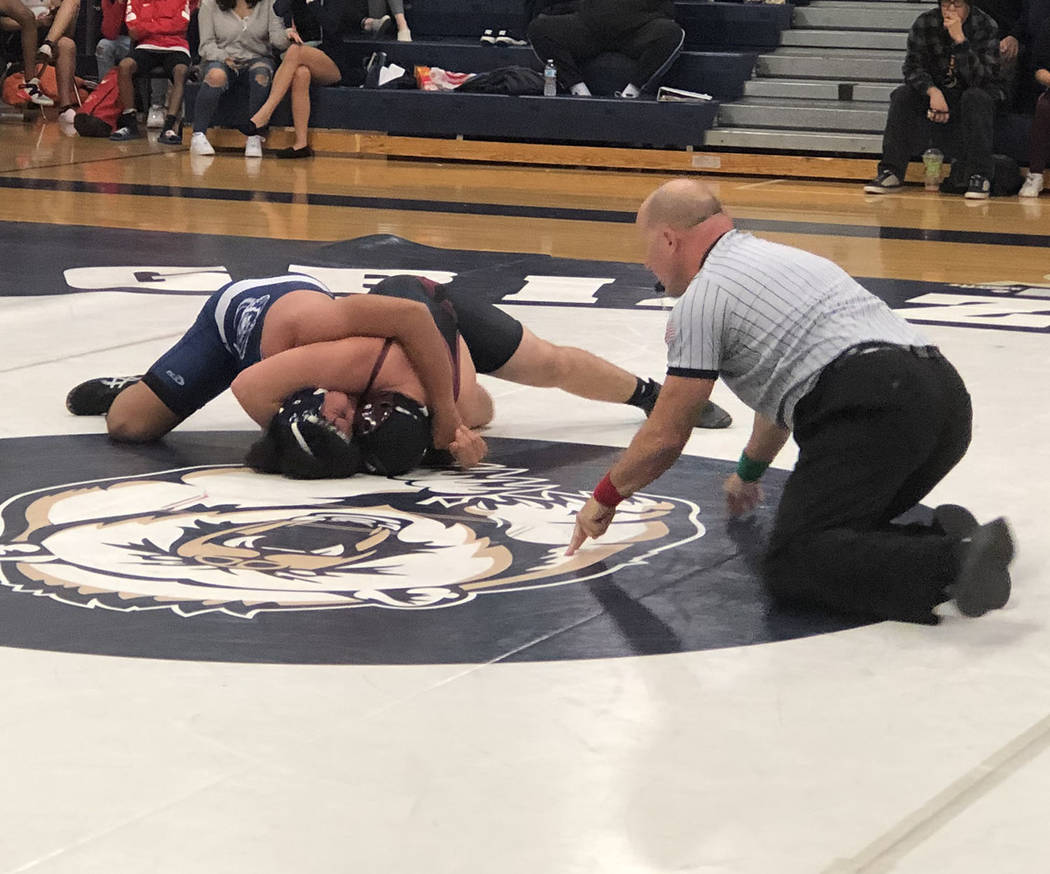 Tom Rysinski/Pahrump Valley Times Pahrump Valley freshman Tanner Hanks closes in on a pin of Anthony Coleman of Las Vegas during the Trojans' 45-36 loss to the Wildcats on Wednesday at Spring Valley High School. 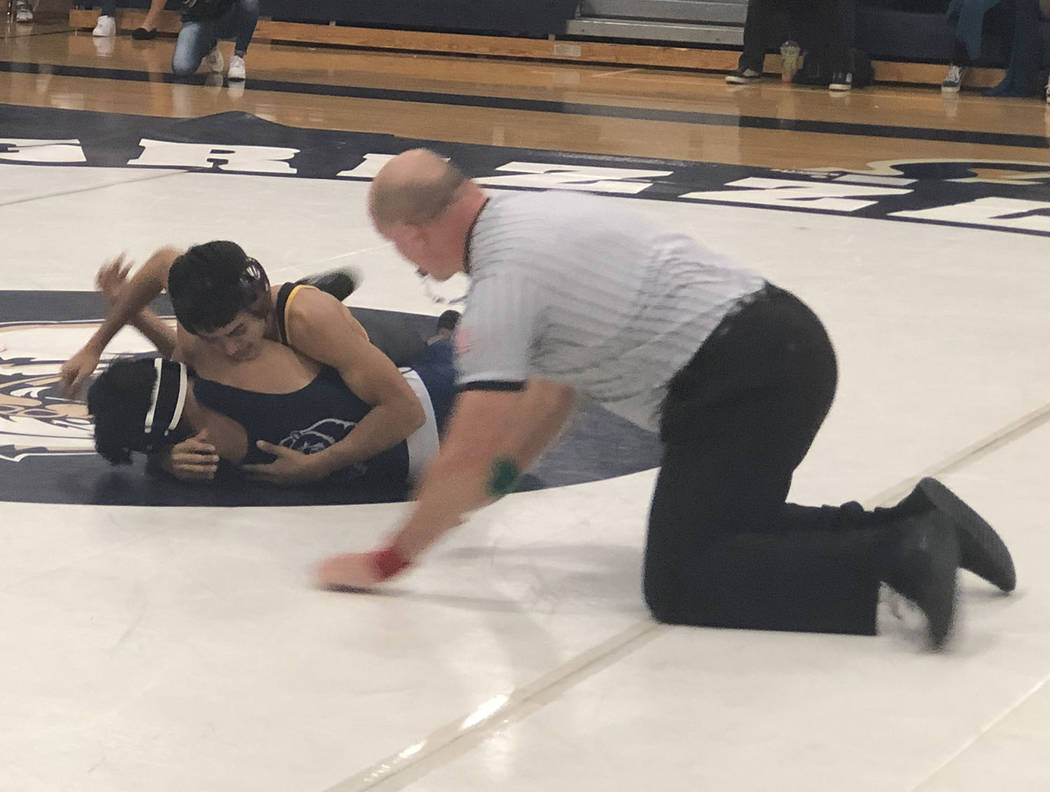 Tom Rysinski/Pahrump Valley Times Sophomore Christopher Vega came close to a pin as the first period wound down Wednesday against Spring Valley, but he needed to work into the third period before getting his second victory of the day at 120 pounds for Pahrump Valley. 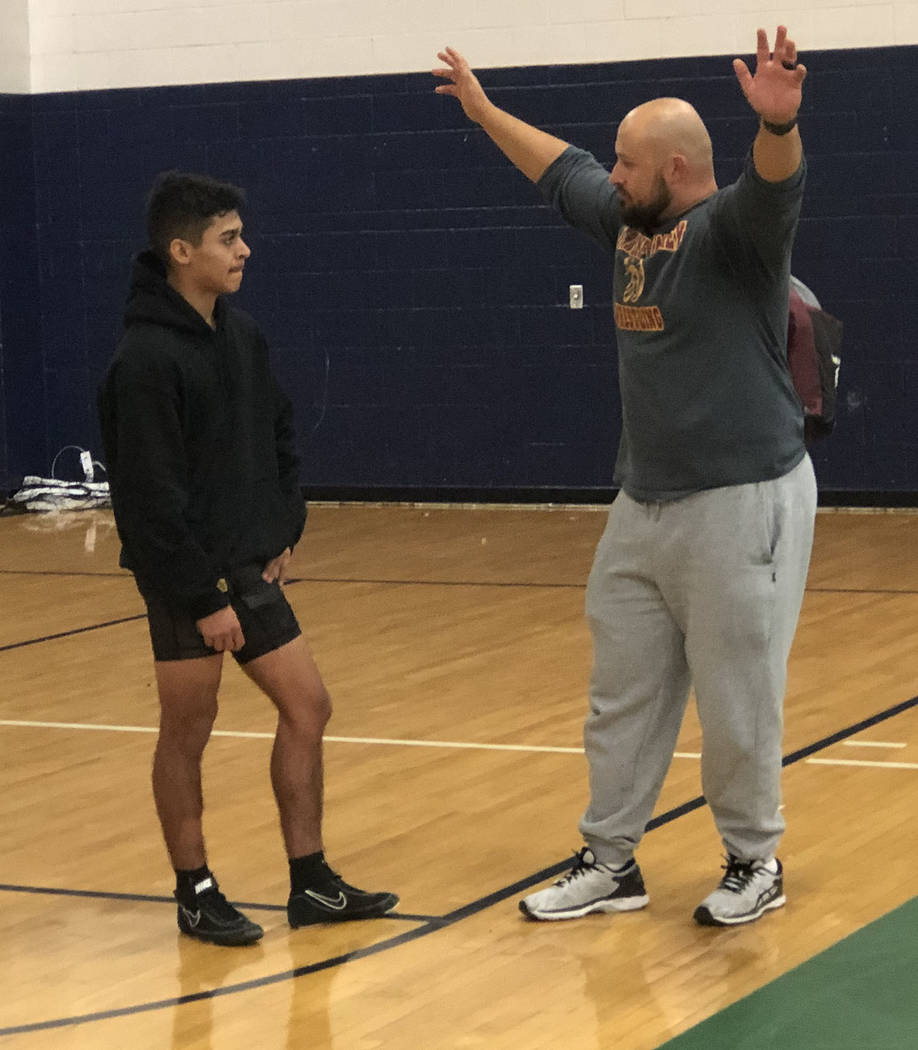 One missed the season-opening Boulder City Duals because he was with family, the other only could wrestle in exhibitions that day because he didn’t make weight.

But Anthony Pearson and Christopher Vega announced their presence in the Pahrump Valley High School wrestling lineup in commanding fashion, as they, along with Donnie Miller and Tannor Hanks, won twice to highlight an otherwise rough day overall for the Trojans at a tri-meet Wednesday night at Spring Valley High School.

Team-wise, the Trojans got schooled by Spring Valley 60-24 after battling Las Vegas down to the last bout before falling 45-36. During one challenging stretch, a 30-6 Pahrump Valley lead against Las Vegas evaporated into a 42-30 deficit before Pearson stopped the bleeding with a 20-second pin of Isaiah Corora at 195 pounds. The Spring Valley match was another story entirely.

The Grizzlies, the Class 4A Desert Region runner-up a year ago, reeled off seven consecutive pins between Miller’s pin at 126 and Pearson’s 53-second fall at 195. And those seven pins came quickly, as the Grizzlies recorded three in a row in 35 seconds or fewer.

Yet, that was just fine with Pahrump Valley coach Craig Rieger, who said his young team needed to see what it takes to compete at a high level.

“That’s what our message was,” Rieger said. “We told them these are two good 4A programs, and it’s not bad to wrestle good wrestlers, learn from it, know how hard we have to work and then when we wrestle 3A teams we need to be successful at that level.

So while most of the young Trojans were learning lessons, Pearson, Vega, Miller and Hanks were delivering some lessons of their own. Pearson didn’t look like a wrestler making his first appearance of the season, needing just 73 seconds to finish off his two opponents.

“I was at my father’s house for Thanksgiving, and he lives out of town,” Pearson said of his reason for missing the Boulder City Duals. “Bad timing.”

But Pearson’s performance Wednesday was worth waiting for, and a hint that his goals for the season are attainable.

“I definitely want to make it to state this year,” said the junior. “I made it to state as a qualifier last year , but I was beat by a stronger kid, so this year I really want to put myself out there and do my best.”

If it’s possible to say one opponent was tougher when the longer bout went 53 seconds, Pearson acknowledged he had a slightly tougher time against Spring Valley.

Meanwhile, Vega was just happy to be wrestling in matches that count after not making weight in Boulder City.

“I was a pound over, but I was kind of dumb over the weekend,” the sophomore 120-pounder acknowledged. “I was 120 in the morning, so I just ran off a pound so I could make weight.”

That was bad news for Justin Sanchez of Las Vegas, who didn’t survive the first period as Vega won by fall in 1:15.

“I just went out and got the job done,” Vega said. “Both of the guys weren’t really physical on me.”

Against Spring Valley, Vega was close to a pin as the first period wound down but couldn’t quite finish the task. But after an even second period Vega again went on the attack in the third, recording a takedown and getting the fall in 4:53 to get the Trojans on the board at 12-6.

“When you’re that close and you don’t get the pin and you get rolled over, it’s kind of frustrating, but it just motivates you more to work harder,” Vega explained.

Miller followed Vega’s pin with his second of the day, getting a first-period fall to even the score just before the Grizzlies went on their seven-pin roll. Miller won his first bout over Kevin Ramirez of Las Vegas in 31 seconds.

“The second kid was definitely a little stronger,” the senior 126-pounder said.

The second kid was stronger for almost all of the Trojans, as Spring Valley was a technically solid team that made few mistakes.

“They perfect one move,” Rieger said of the Grizzlies. “They perfect the cradle, and they’ve done that for years.”

And there is individual talent up and down the lineup. For example, sophomore Mason Prunchak, who dispatched Federico Catalan of Las Vegas in 1:04 at 113 pounds in the opener, had to contend with last year’s Class 4A state champion at 106, Ryan Mitchell, in the Spring Valley match. He lasted less than a minute, and yet he stayed off of his back longer than four of his teammates.

As for Hanks, the big freshman began and ended the Trojans’ day with victories, as the Las Vegas match began at heavyweight while the Spring Valley match ended there.

By coincidence, Hanks began and ended the day with victories for the Trojans, as the freshman heavyweight was first on the mat against Las Vegas and last against Spring Valley.

Pahrump Valley opened the festivities on a high note as Hanks finished off Las Vegas’ Anthony Coleman in 24 seconds, while despite the large deficit against the Grizzlies, Hanks’ second-period pin induced a roar from the Trojans bench.

The Trojans’ next event is the Cowboy JV Duals on Saturday at Chaparral High School. Rieger said, given the youth of his lineup, some wrestlers who have seen varsity time will make that trip. The varsity is off for another week before a return trip to Spring Valley on Dec. 14 for the Spring Valley Duals, with five matches on the agenda for the Trojans.