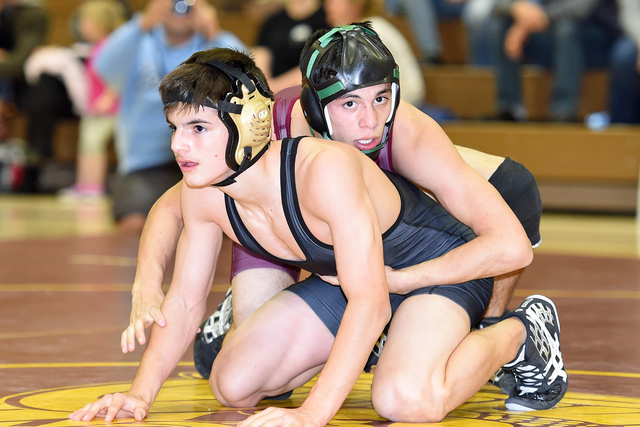 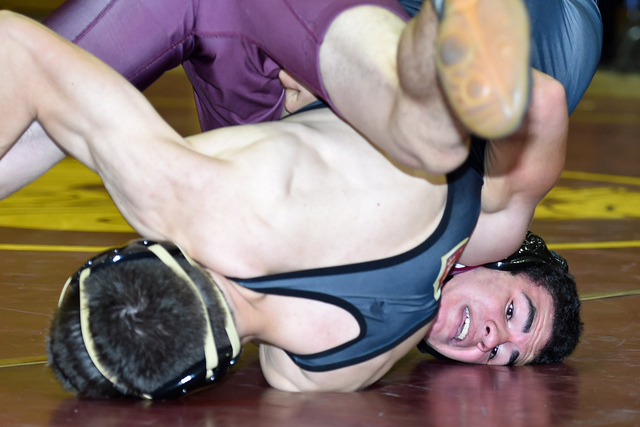 It was all Trojans on Tuesday night as the wrestling team dominated on the mat against Faith Lutheran in Sunset League action at home, beating the Crusaders 60-20.

For the Trojans (4-0 Sunset League), this match with Faith Lutheran (2-2) was huge. Trojans Coach Craig Rieger had said all season long the one team that might hamper the Trojans’ efforts to win the league title was Faith Lutheran. Rieger always talked about their good coaching staff and the school’s ability to attract top athletes.

“It felt good to beat them,” he said. “They are a young team but have a couple of experienced wrestlers at 138 and 170 pounds.”

Rieger said his team should win the rest of their matches barring injury and eligibility.

This weekend the team will travel to Spring Creek for the Kiwanis Invitational, a three-day wrestling tournament, which will start on Thursday and end on Saturday. There will be 30 teams from Northern and Southern Nevada from different divisions participating.

“At our next tournament we will see some strong teams,” Rieger said. “We will see all the North and Virgin Valley. The North has been better than the South.”

Senior Joseph Zarabozo at 106 pounds lost his bout by pin in the first round. He is now 9-8.

Junior Gino Gusman at 120 pounds won by pin in the second round. It took him just 1 minute and 31 seconds to get his man. He is now 10-1. Gusman didn’t wrestle against Cheyenne.

“That was a big match,” he said. “I came back and I felt good. I do need to get back in shape, but I am going to get there.” When asked at what point in the match he felt he had won, he replied, “I was just looking for something up there and I got it. I cradled him. I always keep my head up and always look forward and never look down on myself.”

Junior Antonio Sandoval at 126 pounds won his match by pin. He increased his record to 10-2.

Senior Nick Nelson at 132 pounds won by forfeit. He increased his record to 5-2.

Senior Levi Gundacker at 138 pounds lost by technical fall. Gundacker went up against a state champion wrestler. His record falls to 10-6. He has 109 wins in four years of wrestling. Rieger said, “He may have lost but he came out and went hard. He just kept on fighting and I just love that.”

Senior Sam Brophy at 145 pounds won by pin in the second round. Brophy continues to beat everything sent his way. He remains undefeated in league at 12-0.

Senior John Clark at 152 pounds turned things around and won by pin in the first round. It took him just 1:36 to get his man. He improved his record to 2-6.

Clark had this to say about his victory: “It was very important to get the win because everyone needed a win. Not everyone could,” he said. When asked when he felt the win was his, he jokingly said, “I knew when the referee hit the mat. It’s always up in the air.” Clark said he tried a Chicken Wing to pin his opponent.

“He flopped out of that and then I just pushed him down. I think I got this win tonight because coach has been pushing me and I have been working really hard. I have also had more practices,” he said.

Rieger said the win was nice and it was good for him.

“I talked to him and Vega, 152 and 160 pounds. These guys have struggled this whole year. I said, ‘You two are wrestling some young, tough wrestlers, but they were young,’” Rieger said. “’You have to get physical, get out there and get after them.’ And they did. I was happy for those boys to get a win. These two are seniors and I wanted them to come out and be aggressive.”

Senior Anthony Vega at 160 pounds came out aggressively and took care of his opponent by pin in the second round. Vega has been out all season, and just got on the mat two weeks ago due to a football injury from the last game. He is 1-1.

His coach was excited for his win. “He came out aggressive. He was not gun-shy. He came out and — bang,” Rieger said.

Senior Sam Tucsnak at 170 pounds lost to his opponent by decision. His opponent won the Holiday Classic in Las Vegas two years ago. The fans in the stands were saying this was the most exciting match of the evening, despite the loss. Tucsnak is now 15-4. Rieger said that Tucsnak’s opponent is one of two good wrestlers on the Faith Lutheran team.

“Sam just got after him and didn’t get pinned,” Rieger said.

Senior Johnathan Corrow at 182 pounds beat his opponent easily by pin in the third round. He improves to 15-3.

Senior Jax Clayton at 195 pounds won his opponent by pin in the first round. He improves to 15-3 and now has 108 wins in four years.