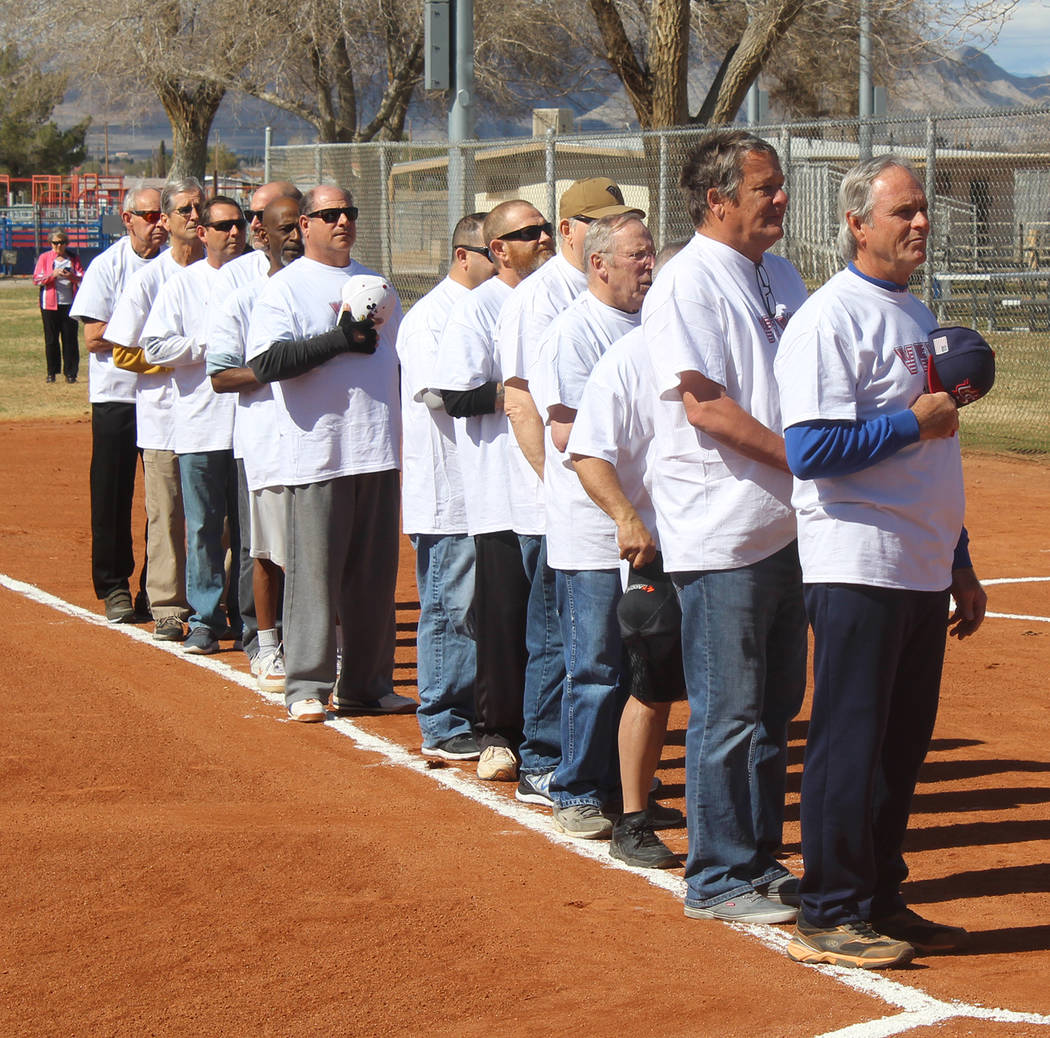 Tom Rysinski/Pahrump Valley Times Players from the VFW/VFW Auxiliary team line up along the first base line for the Pledge of Allegiance before the Batting 1.000 Challenge against the Pahrump Youth Softball Association on Sunday at Petrack Park. 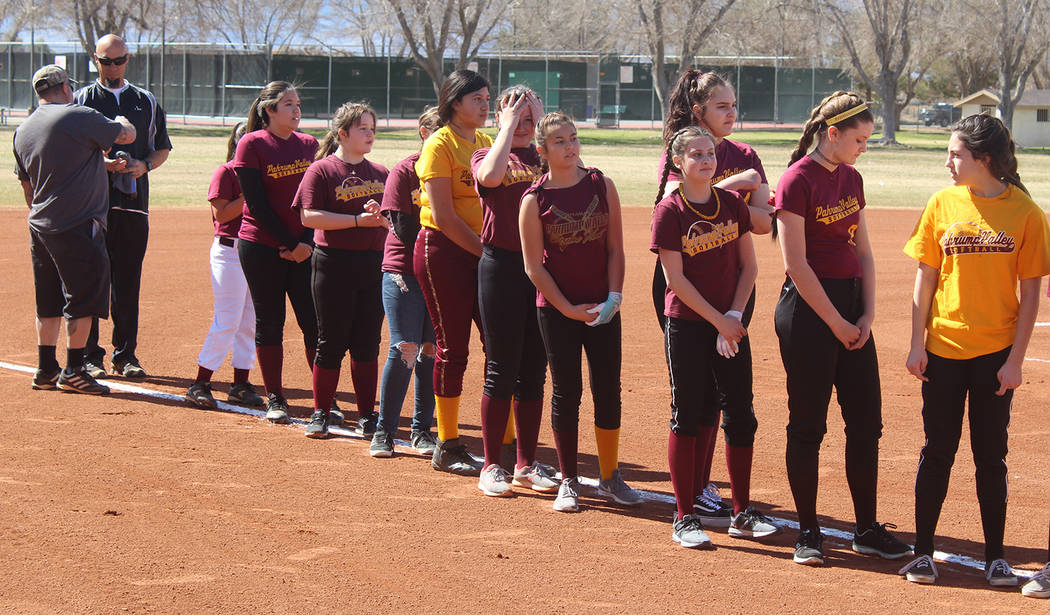 Tom Rysinski/Pahrump Valley Times The Pahrump Youth Softball Association All-Stars are introduced before the start of their game against the VFW/VFW Auxiliary, a fundraiser which brought in roughly $5,000 for the two groups to share. 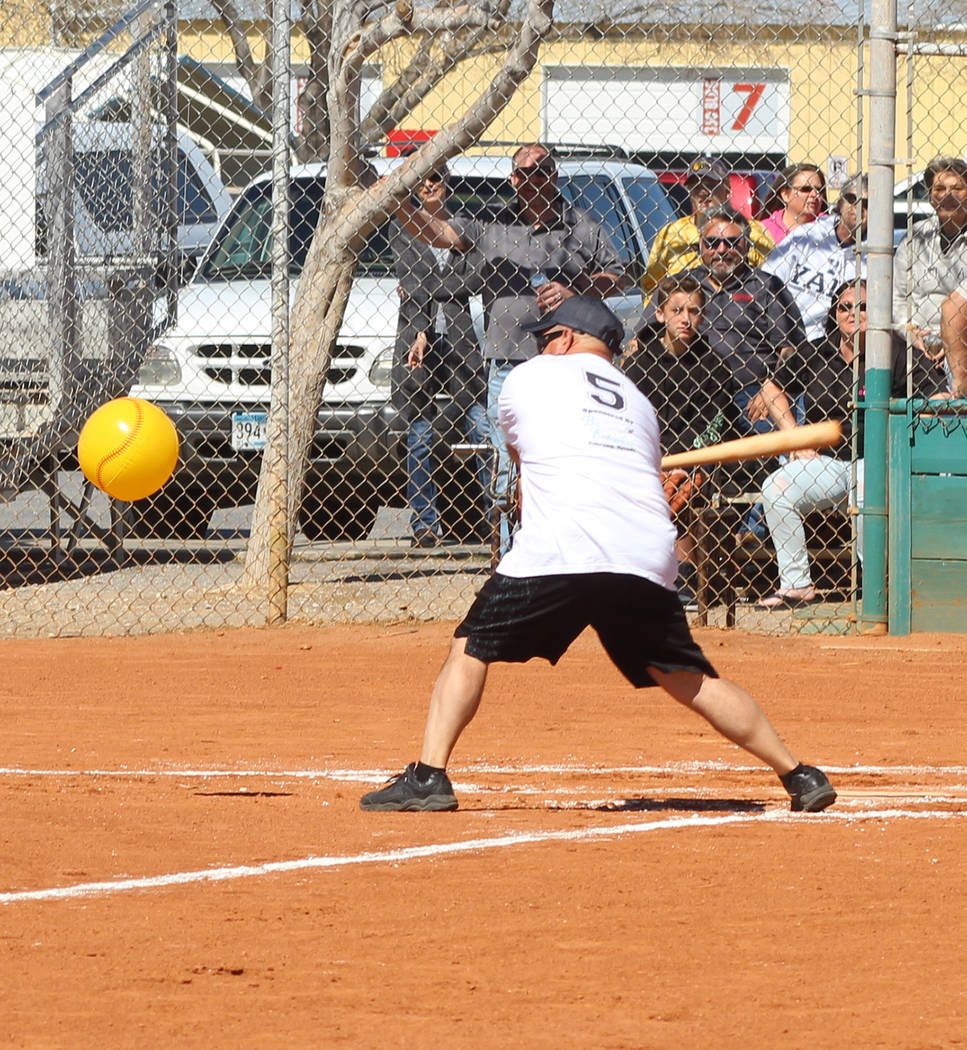 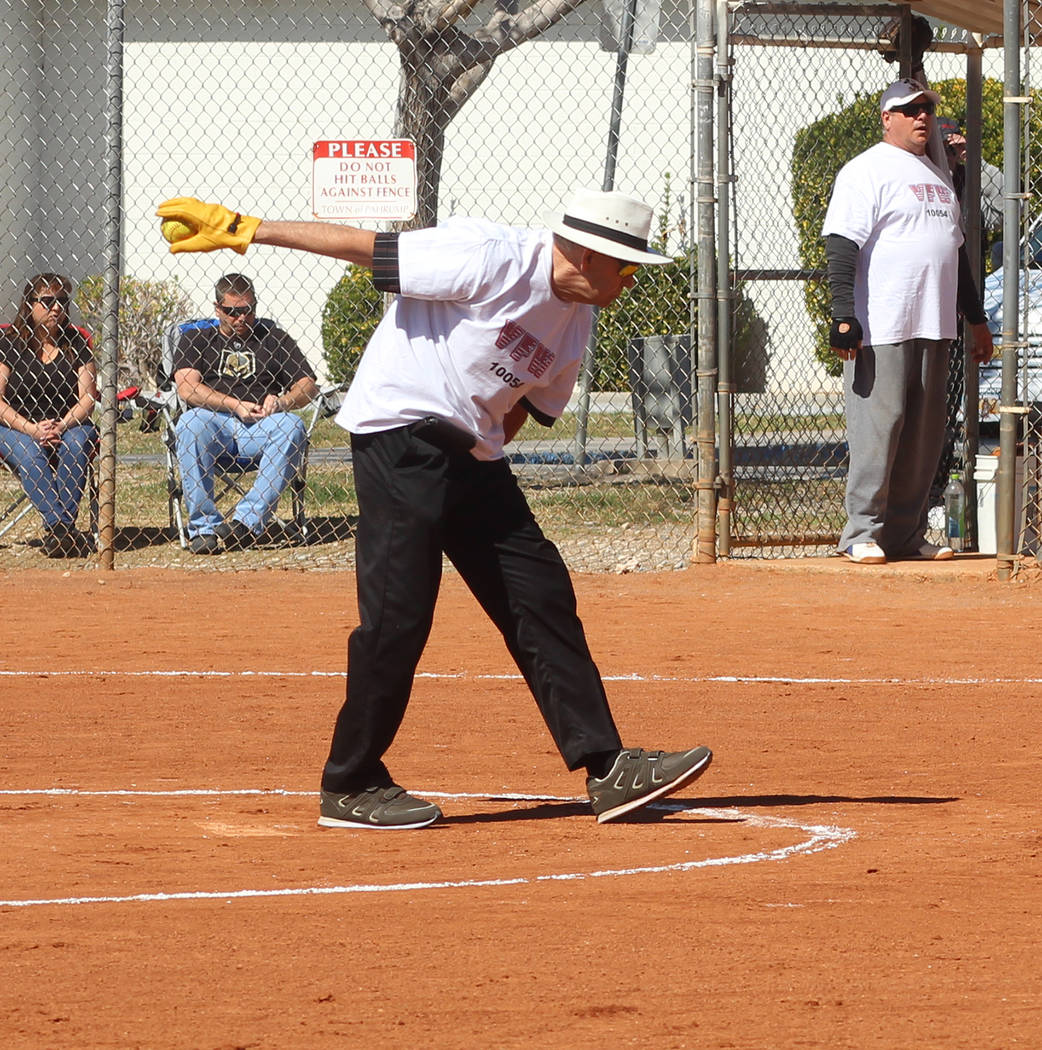 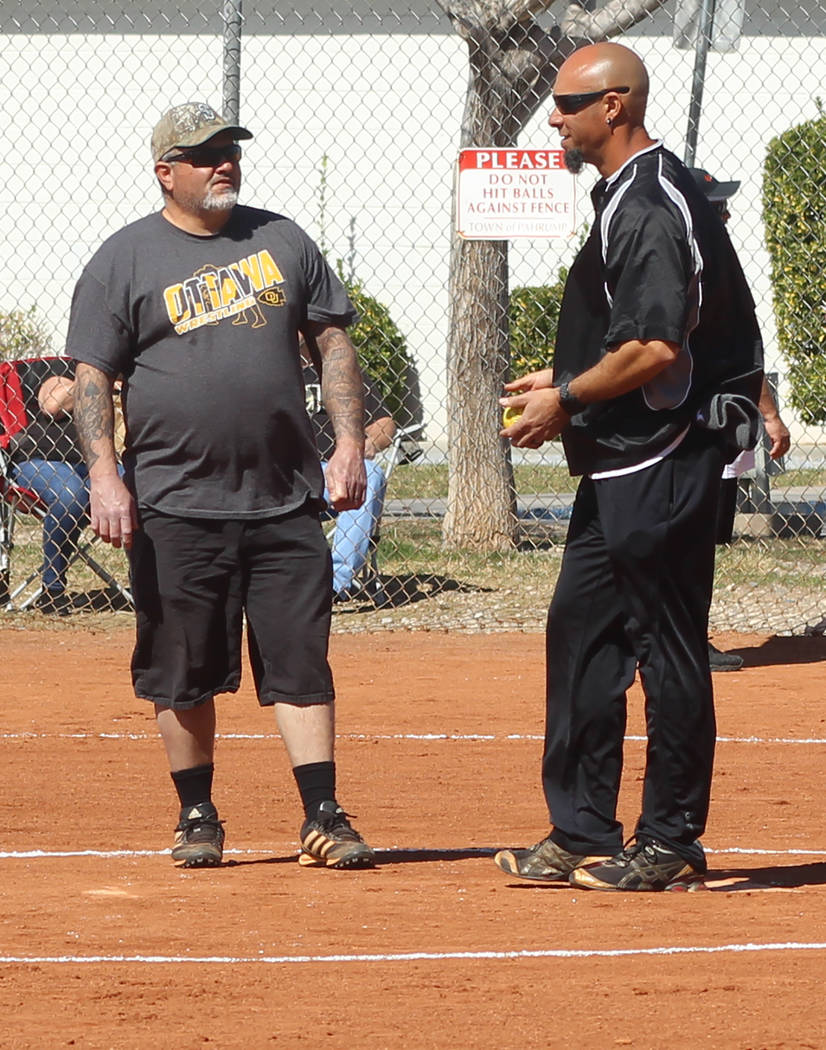 Tom Rysinski/Pahrump Valley Times Umpires Dom Sandoval and Shawn Mendoza plot how to maintain order between innings of the Batting 1.000 Challenge on Sunday at Petrack Park. 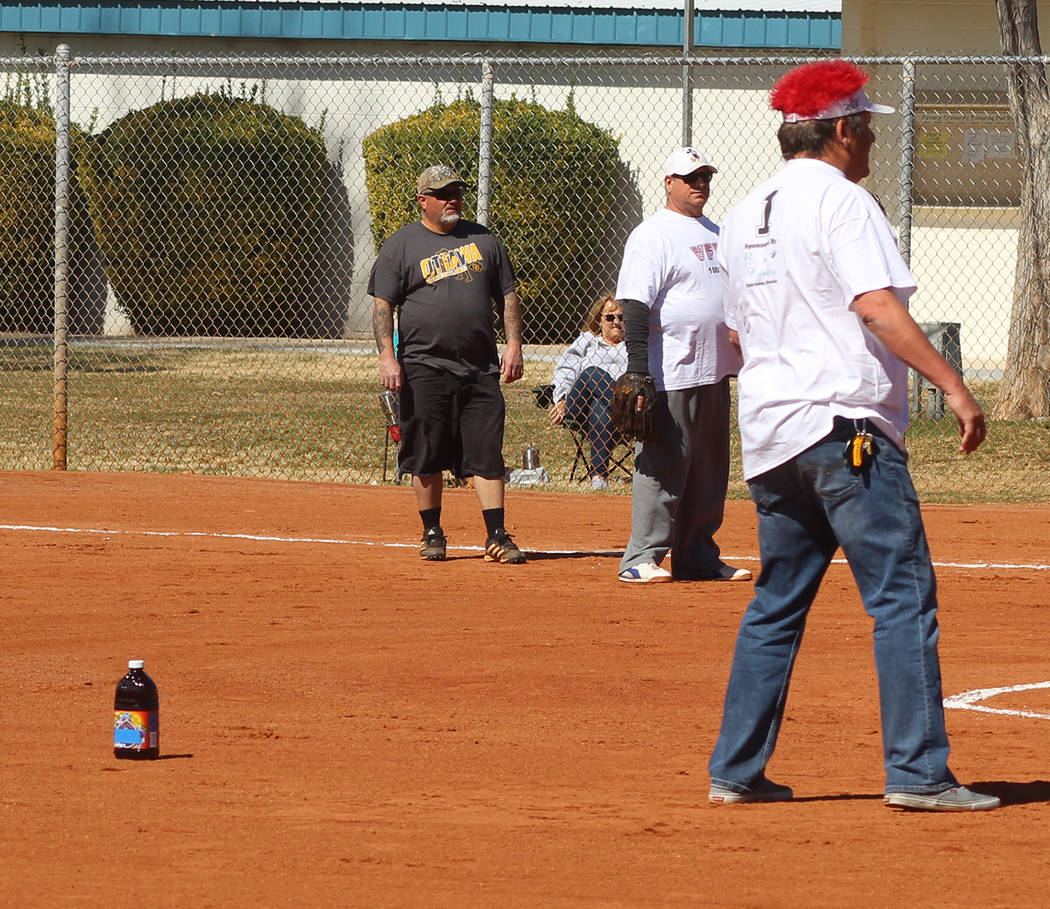 It’s not always easy to get kids to want to spend time with their older relatives and neighbors, but 13-year-old Catalina Sandoval had a little motivation for the annual Batting 1.000 Challenge softball game pitting young Pahrump players against a team from Pahrump’s Veterans of Foreign Wars post and VFW Auxiliary.

“I kind of like talking back with my uncle,” she said with a laugh. Catalina had bragging rights over Uncle Jason Sandoval as the Pahrump Youth Softball Association all-stars handed the VFW team its second consecutive loss in the series, 12-11 on Sunday morning at Petrack Park.

The game has become a sure sign of spring over the five years it has been played, but the PYSA is a new participant.

“This is the first year the VFW has approached us with this, and I think it went really well,” said Dom Sandoval, president of the PYSA.

“Proceeds are split between the Pahrump Youth Softball Association and the VFW Auxiliary,” explained the auxiliary’s president, Bonnie Darrell. “The donations toward the auxiliary will go toward the veteran community and to the VFW because we need a new roof. We have a few leaks.”

“The money we raise here goes toward buying equipment we need: bats, balls, whatever we need for the girls just to get the season going,” Sandoval said. “It helps to pay for uniforms. Over time, equipment breaks down, things get worn out. The girls tear them up every year, and this helps us buy new things to keep them going.”

There was no admission charge for the game, but raffles helped contribute to the pot.

“There were raffles for the gift baskets and the raffles for the dinners,” Darrell said, explaining that there were five dinners for two valued at $50 each at five places around town raffled off. “And we had 12 gift baskets so we could do one each time they changed sides. We’re happy that so many people were able to donate to us.”

The VFW and VFW Auxiliary members also were happy to be there.

“Perfect day today,” said Mike Nicosia, junior vice president of the auxiliary and coach of the VFW/VFW Auxiliary team. “We had 16 on our roster. Some guys play like two innings, and then something hurts. We had guys in their 80s.”

K.C. Connell, senior vice president of the auxiliary, gave Nicosia a lot of the credit for the event.

“If it weren’t for this guy, this wouldn’t happen,” Connell said. “Mike makes it happen, he and his wife.”

Stacie Nicosia, the auxiliary’s fundraising coordinator, said the event unofficially took in a little more than $5,000. Just two years ago, that figure was $3,780.

“A lot of people make it happen,” Mike Nicosia said. “You’ve got to organize everything or these guys would be going crazy.”

“My wife and I take pride in being able to support our veterans,” Connell said. “We’ve been going to the VFW for eight years now. It’s a privilege to walk into the halls. My father was a World War II veteran, as is my wife’s, and my brother’s a Vietnam veteran. And that’s what allows me to join the VFW Auxiliary.”

The efforts of Nicosia, Connell and their teammates were not the sole source of money raised during the event, as both members and softball players were out raising money in advance of the game.

“We do a ‘Fill the glove.’” Darrell said. “The girls were at the Maverik and the Walmart accepting donations from the community the last two weekends. We had 12 girls and 12 auxiliary members at each location.”

Darrell said she has been involved with the auxiliary since moving to Pahrump three years ago, and her reasons are also partly personal.

“My dad served in World War II, so it’s very near and dear to me, and I wanted to do something to be part of the community,” she said. “We have really gotten out in the community and made a big difference this year for our veterans. Everyone’s welcome to come in. We have dinners on Tuesdays and Fridays, and lunches, and bingo at the VFW on Homestead Road.”

Meanwhile, the PYSA is fielding three teams this season, which will be played at the end of March in Henderson.

The girls who played Sunday scored 12 runs despite some good-natured harassment from their older opponents. Umpires Sandoval and Shawn Mendoza issued several warnings to the VFW side for “antagonizing” the PYSA players.