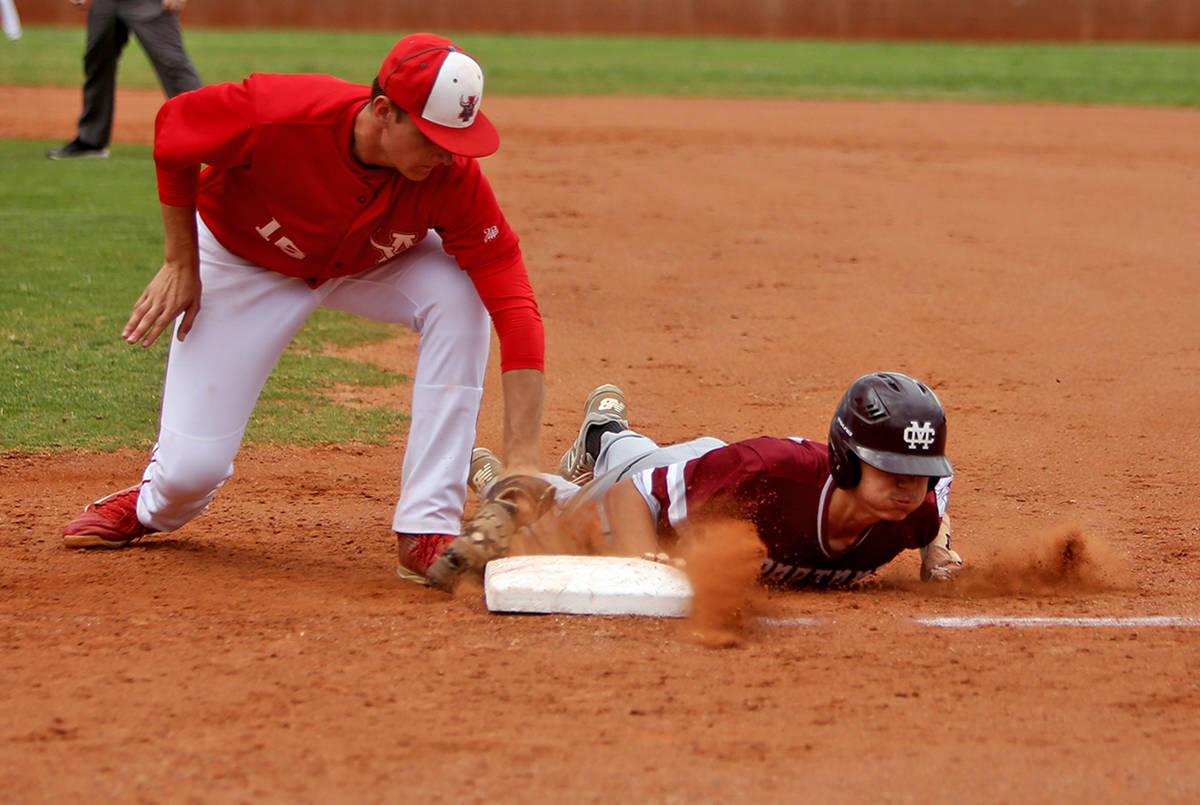 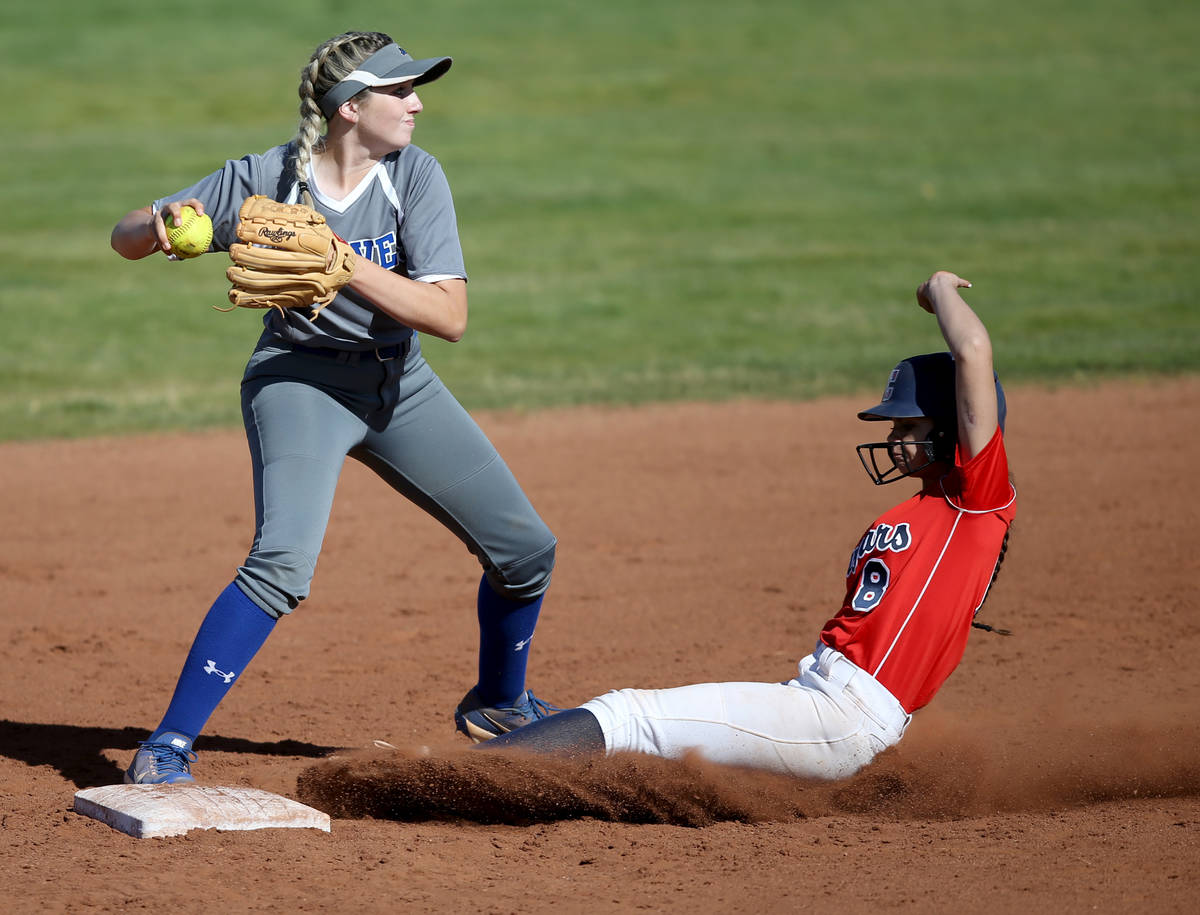 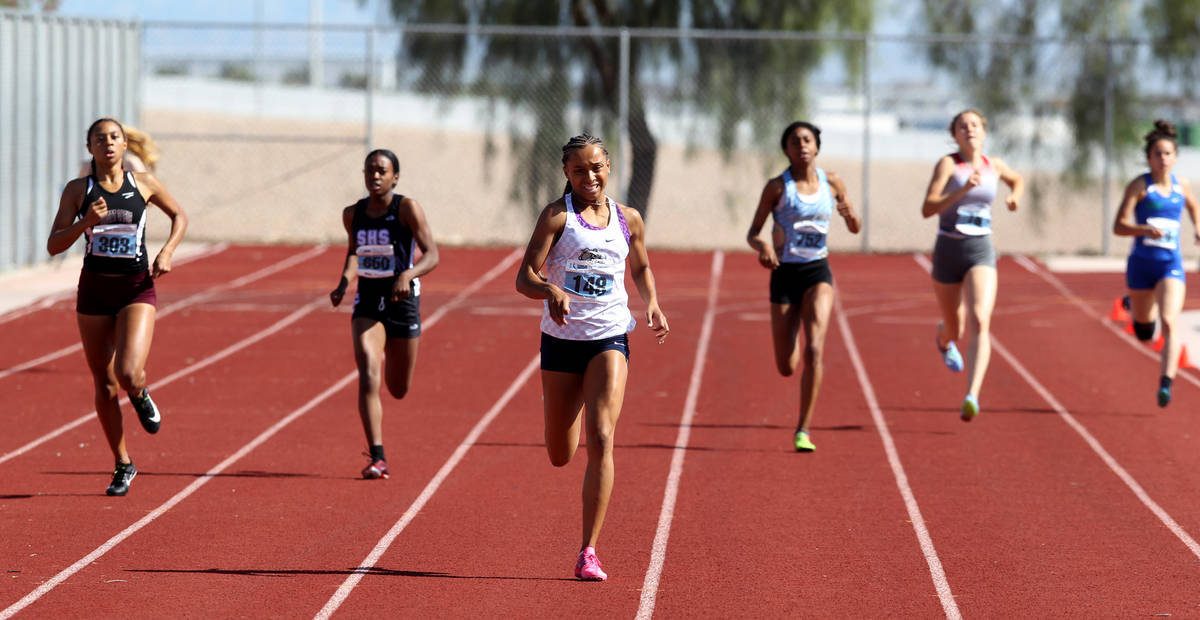 Kennedy Brace Centennial, third from left, on her way to winning the 400 meters in the state track meet at Desert Oasis High School in Las Vegas Saturday, May 18, 2019. Competing with Brace, from left, are Endya Scott of Desert Oasis, Alayna Verner of Silverado, Roxann Patterson of Reed, Alina Oranchak of Arbor View and Sierrah Rivera of Green Valley. (K.M. Cannon/Las Vegas Review-Journal) @KMCannonPhoto

Foothill High School athletic director Matt Iglitz admits there were times during the past few months that he had given up hope that the Clark County School District would play sports in the 2020-21 school year.

Those fears were finally allayed in February when CCSD announced it would gradually return students to the classroom in a hybrid learning model, paving the way for a six-week spring sports season, as had been scheduled previously by the Nevada Interscholastic Activities Association.

Those six weeks begin Friday and run through May 22, with no state championships. For Nye County schools, the CCSD returning to the playing fields will give them a schedule that, if not ideal, looks closer to normal than those played by fall and winter teams.

“All of us should be appreciative of the opportunity to compete,” said Iglitz, who also coaches the school’s baseball team. “I’ve talked for years about how it’s a privilege for all of us, and this is a great reminder of that.”

When competition begins, it will end a 401-day drought since CCSD suspended all sporting events March 11, 2020, at the start of the COVID-19 pandemic.

While CCSD executive athletic director Pam Sloan said the district is ready, she acknowledged the challenges it faced. Those included transportation and not having enough officials to cover the original schedule, a problem she said has been seen nationwide.

“How much time do you have?” she asked jokingly when asked about obstacles the district faced.

Because COVID-19 is still a concern, protocols were put in place. Athletes and coaches will be tested for the virus once a week, a saliva-based test with results returned within 48 hours.

Fans will be allowed but only those from the home team. How many spectators will be admitted will be site-based, but it will be no more than 250 or 50% of the stadium’s capacity. Track and field and swimming and diving meets will be limited to no more than four teams, and each venue will determine how it handles fans.

Sloan said charter bus companies are helping the district with transportation, and CCSD athletic director Tim Jackson has revised the schedules several times to make sure there would be enough buses and officials for each event. The district is trying to cram as many events as possible into the six-week window. For example, Jackson said there would be 86 boys volleyball matches in the first 26 hours of competition.

Baseball and softball typically will be played Monday through Thursday, with boys volleyball matches Friday and Saturday. Track and field meets will be Friday and split sessions Saturday, and swimming and diving will compete Saturdays.

“In the beginning, I selfishly thought I’d like to have more games, would like to play for state — all the things we typically have,” Centennial athletic director and softball coach Mike Livreri said. “But what the girls communicated to me was they want to play. If it’s 12 games, it’s 12 games. The girls want to be out there, and that’s the big thing.”

Livreri said numbers are down in his softball program, and that’s common for many schools throughout the valley. While some schools don’t have enough players to field a team at the junior varsity and freshman levels, others, such as Canyon Springs (baseball, softball, boys volleyball), Cheyenne (baseball), Bonanza (softball) and some schools in lower classifications won’t field certain programs at all.

Arbor View athletic director Jay Howard said he puts participation at about 60 to 70% of what it would be in a normal spring.

“Some are looking at the shortened schedule and saying, ‘Why don’t we just play next year?’ ” Howard said. “But it’s very exciting to be playing. I know our coaches are excited about it, and we’re going to do whatever is best for the kids.”