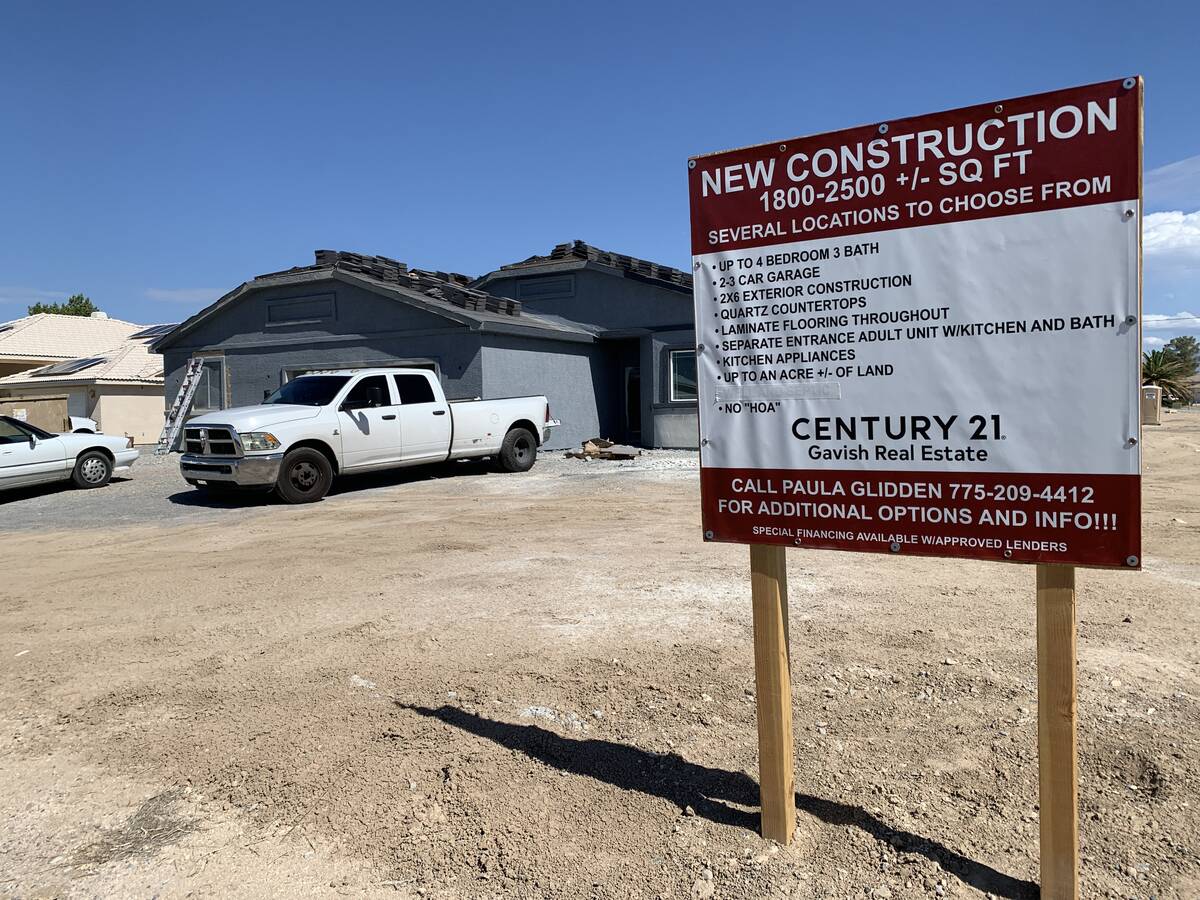 Brent Schanding/Pahrump Valley Times - A house under construction at Pebble Beach Avenue and East Blackhorn Street in Pahrump as seen on Tuesday, Aug. 9, 2022. 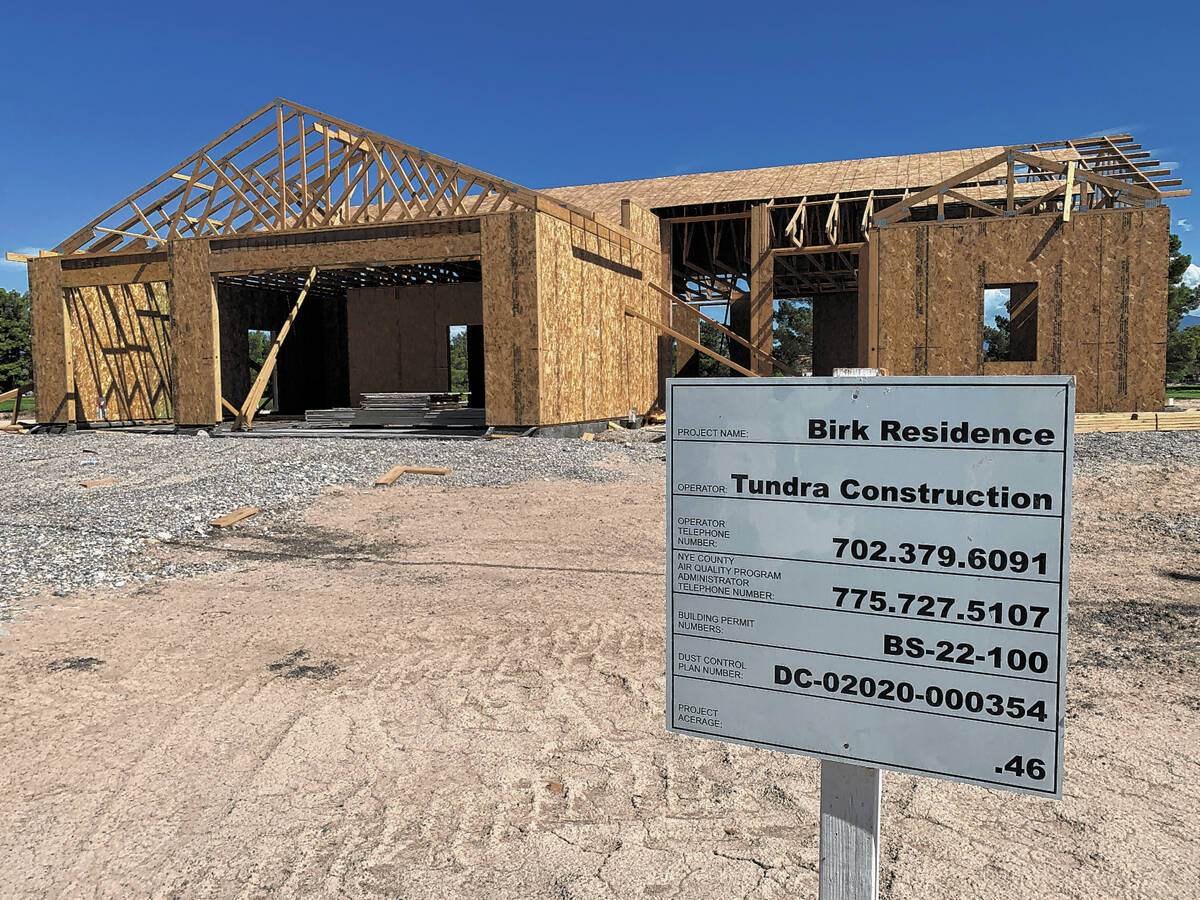 Brent Schanding/Pahrump Valley Times - A house under construction on the 1800 block of Augusta Street in Pahrump as seen on Tuesday, Aug. 9, 2022.

Southern Nevada home prices have cooled as buyers pulled further back in July. The once-sizzling market is becoming a more distant memory.

The median sales price of previously owned single-family homes — the bulk of the market — was $465,000 in July, down 3.1 percent, or $15,000, from June, according to a new report from trade association Las Vegas Realtors.

Prices were still up 14.8 percent, or $60,000, from a year ago. But prices have now fallen month to month for the second consecutive time after not dropping for more than two years.

Forty-eight homes sold in Pahrump last month, which is down more than 18 percent from the previous month.

“We’re definitely seeing a shift in the housing market,” LVR President Brandon Roberts said. “We haven’t seen prices slow down like this in several years.”

In July, more than 45 percent of Pahrump homes were sold below the asking price. Homes sat on the market about 20 days longer than they did the month prior.

A total of 7,331 houses were on the market without offers at the end of July, up 27.6 percent from June and 143.8 percent from July 2021, according to LVR, which reports data from its listing service.

Availability hasn’t been this high since summer 2019, Roberts said in the release.

“This is encouraging news for people looking to buy a home — although rising interest rates and today’s prices still present challenges for many potential buyers,” he added.

Buyers are pulling back in Southern Nevada and around the U.S. following a year of huge price gains and as higher mortgage rates wipe out the cheap money that fueled America’s unexpected housing boom after the pandemic hit.

“A year ago, you had to give the seller everything they wanted,” she said.

Fueled by record-low mortgage rates that let buyers stretch their budgets, Southern Nevada’s housing market reached its most frenzied pace in years in 2021. Sales prices hit new all-time highs practically every month, buyers flooded homes with offers, and homebuilders put buyers on waiting lists and in some cases drew names to determine who could purchase a place.

Lately, however, the Federal Reserve has been raising interest rates in an effort to cool inflation, and once-frenzied homebuying has slowed amid higher borrowing costs.

In some ways, Las Vegas has been hitting the brakes harder than other metro areas.

Just over 27 percent of pending sales in the Las Vegas area fell through in June, the highest cancellation rate in the nation, according to real estate brokerage Redfin, which reported that home sales nationally were nixed at the highest rate since the onset of the pandemic.

Also, some 20 percent of Southern Nevada listings had a price cut in June, the fourth-highest share in the U.S., listing site Zillow reported.

On the construction side, meanwhile, Southern Nevada builders logged 713 net sales — new purchase contracts minus cancellations — in June, down almost 24 percent from the same month last year, according to figures from Las Vegas-based Home Builders Research.

The sales tally in June was the lowest of the year and marked the third consecutive monthly drop, the firm reported.

Just three or four months ago, buyers were paying $10,000 over the asking price, but now they’re offering at or below the listing price and seeking concessions, said Batchelor, who also pointed to the surge of price cuts in Southern Nevada.

“The market is definitely turning,” she said.