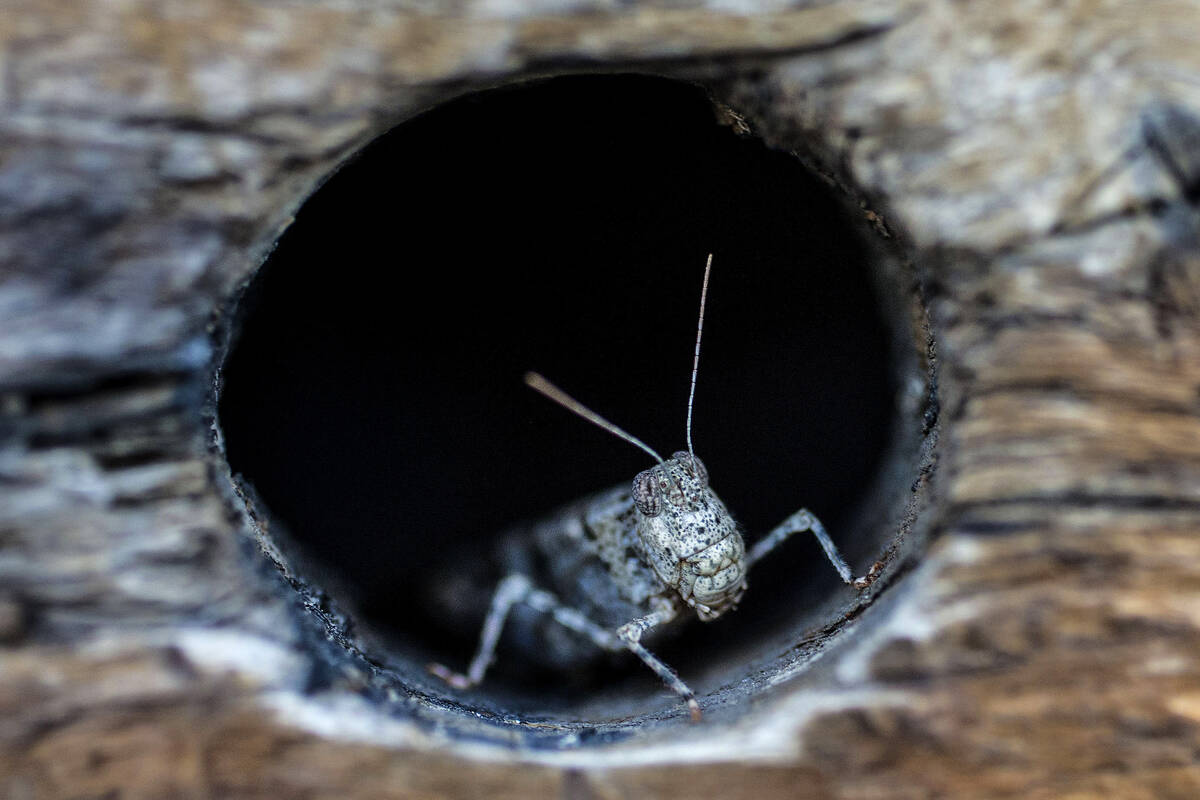 A grasshopper rests on a wall outside California Pizza Kitchen in downtown Summerlin on Thursday, July 25, 2019, in Las Vegas. A migration of mild-mannered grasshoppers sweeping through the Las Vegas area is being attributed to wet weather. (Benjamin Hager/Las Vegas Review-Journal via AP) 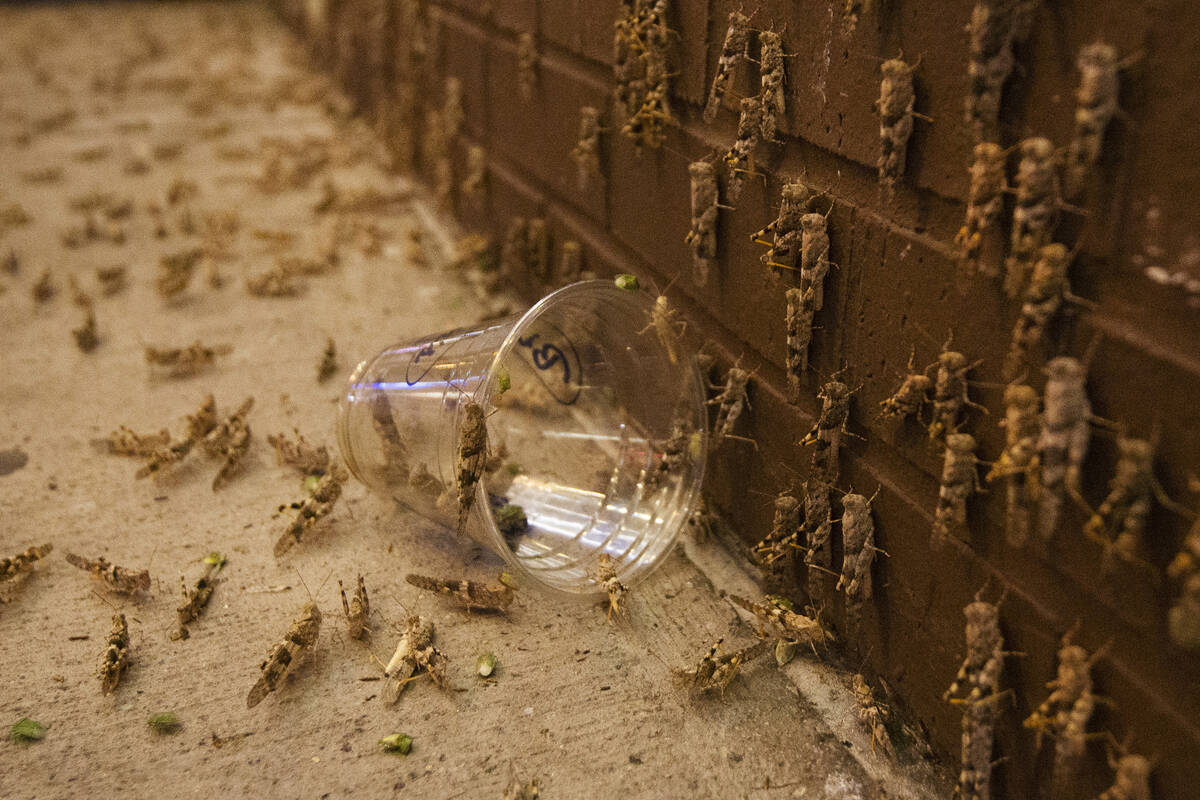 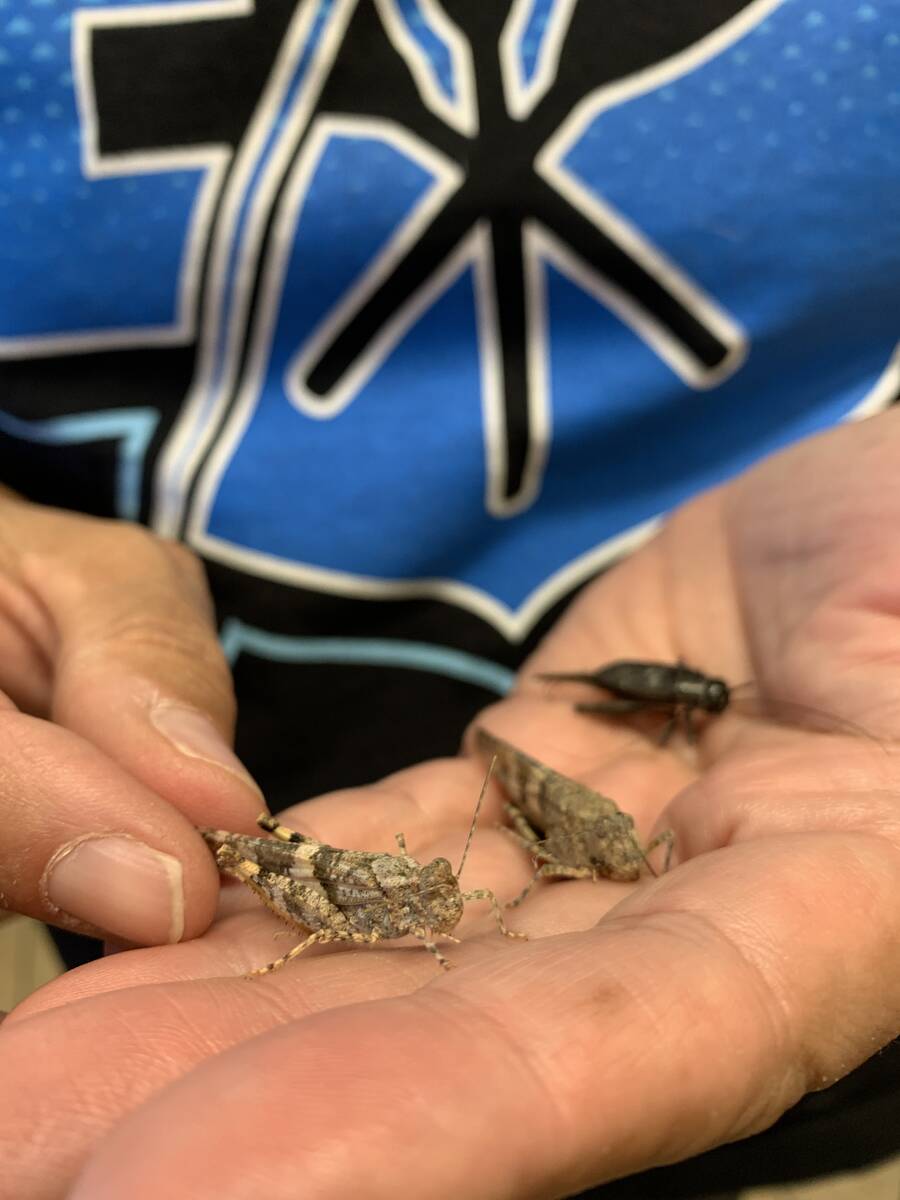 They’re already here and more could be coming.

At least that’s what entomoligists say, who predict a slight rise in the population of grasshoppers this year following the monsoon-like rains earlier this season which fueled the bug’s leafy food supplies.

Forty-five million grasshoppers swarmed the area in 2019, according to one study, which concluded they were partly drawn to the Las Vegas area by bright city lights.

Elske Tielens, a postdoctoral research fellow at the University of Oklahoma and lead author of the research published in the 2021 edition of Biology Letters journal, told the Review-Journal back then that it was the first of its kind to look at the effects of a large-scale source of artificial light, such as the nighttime glow of Vegas, on insect movement.

The research team used weather surveillance radar images from the National Oceanic and Atmospheric Administration to measure the grasshopper swarms, which invaded the area from June through mid-August in 2019.

The swarm was so dense back then that some meteorologists initially mistook the flying bugs for widespread rain because they showed up on doppler radar. The state Department of Agriculture said in 2019 that the influx of the winged insects was also probably caused by an unseasonably wet winter and spring, which prompted the insects to travel to the area from northern Arizona and Laughlin.

Similar weather conditions this year have pushed the pests to Pahrump, but no one can say for sure how bad the swarm will be this season.

Pest-control professionals say it’s difficult to spray or treat areas infested for grasshoppers because they’re likely to return. And although many said they fear the bugs, they’re not really harmful and it’s best to leave them alone.

Still, most aren’t too welcoming of the winged critters that can grow as big as 7 centimeters and reach speeds of 8 mph when flying.

“I am not afraid of most insects in general, but when we get these cycles of massive infestation, it creeps me out big time,” Karen Kazinski, of Pahrump, told us on Facebook.

We asked our more than 13,600 Pahrump Valley Times Facebook followers to share their observations about the grasshoppers. Many told us they’ve seen a proliferation of the insects lately.

Deb Stone told us she sees “hundreds a day” now, while Kerri Lynn Honeywell added that “they were all over the park” at last weekend’s Pahrump Fall Festival.

“I’ve seen a lot in town but not as many as last time,” Amber Quigley, of Pahrump, told us, while Judy Zoda, of Las Vegas, said she’s noticed more “gigantic” praying mantises than grasshoppers this season.

Grasshoppers are commonly eaten in Mexico, parts of Central America and the rest of the world. They’re even considered a delicacy and a vital source of protein in some cultures.

While the Pahrump Valley Times doesn’t endorse eating the critters, Troy La Mana, of Pahrump, said his dogs do enjoy them as nightly snacks.

Jay Gould, of Pahrump, says the grasshoppers also make excellent bait — if you can find a watering hole with some fish around here.

They can be beneficial insects that serve an important role in the ecosystem, providing food for predators like desert lizards and leaving waste rich in nutrients for the surrounding plants.

Some who raise birds and fowl are even excited about the return of the grasshoppers.

“I hope they show up at my house,” Eddie Lee Allen, of Death Valley Junction, Calif. told us. “I’ve got chickens, turkeys, ducks and geese.”

An article from The Las Vegas Sun on Aug. 1, 1998 noted that two grasshoppers repeatedly interrupted Penn & Teller’s magic show at Bally’s hotel-casino in Las Vegas back then by “buzzing the performers and hopping across the stage.”

“For a finale, one grasshopper shot across the stage and hit Penn Jillette in the head while the magician was performing a trick,” the publication noted.