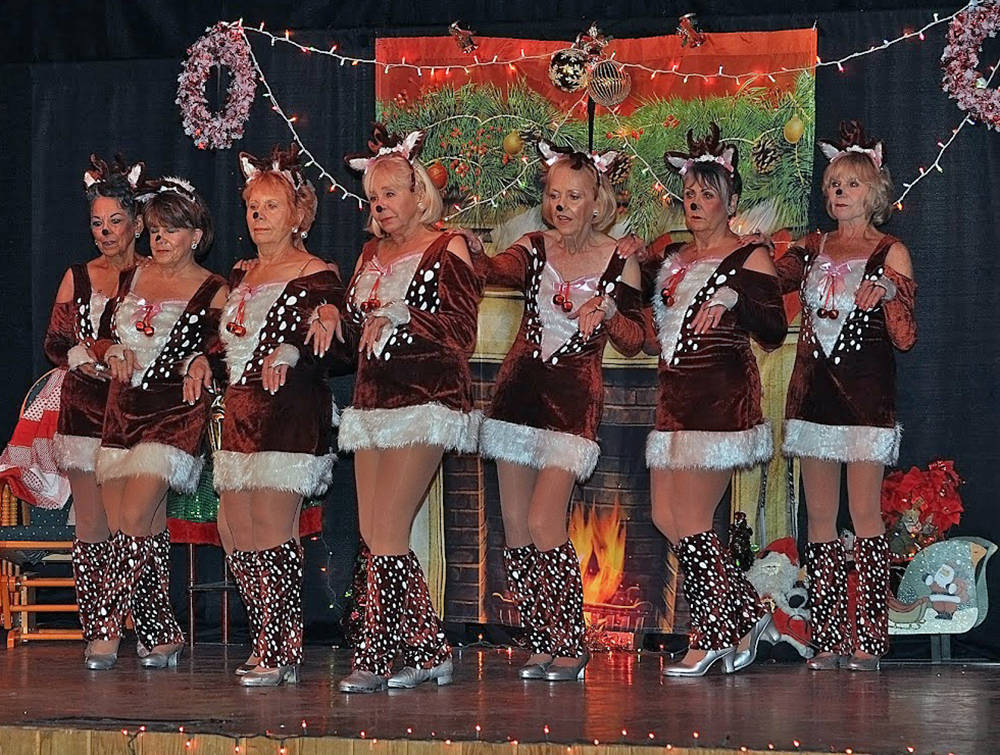 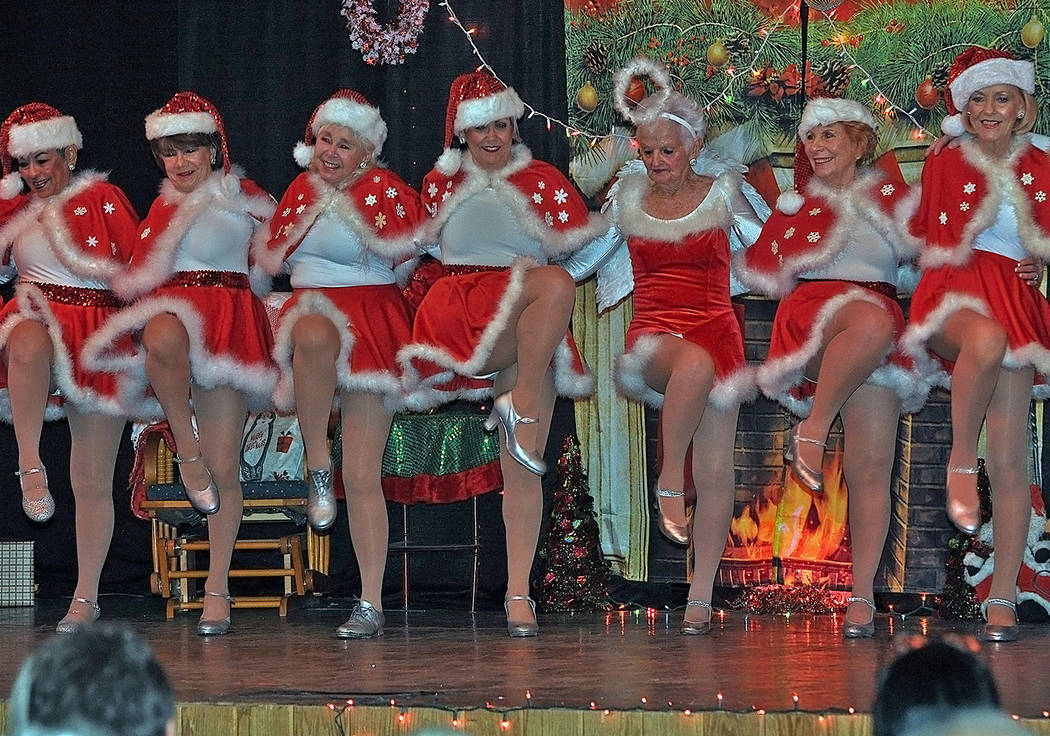 Horace Langford Jr./Pahrump Valley Times Decked out in holiday style, the ladies who took to the stage at the Christmas Benefit Show wowed the crowd with their talent and energy. 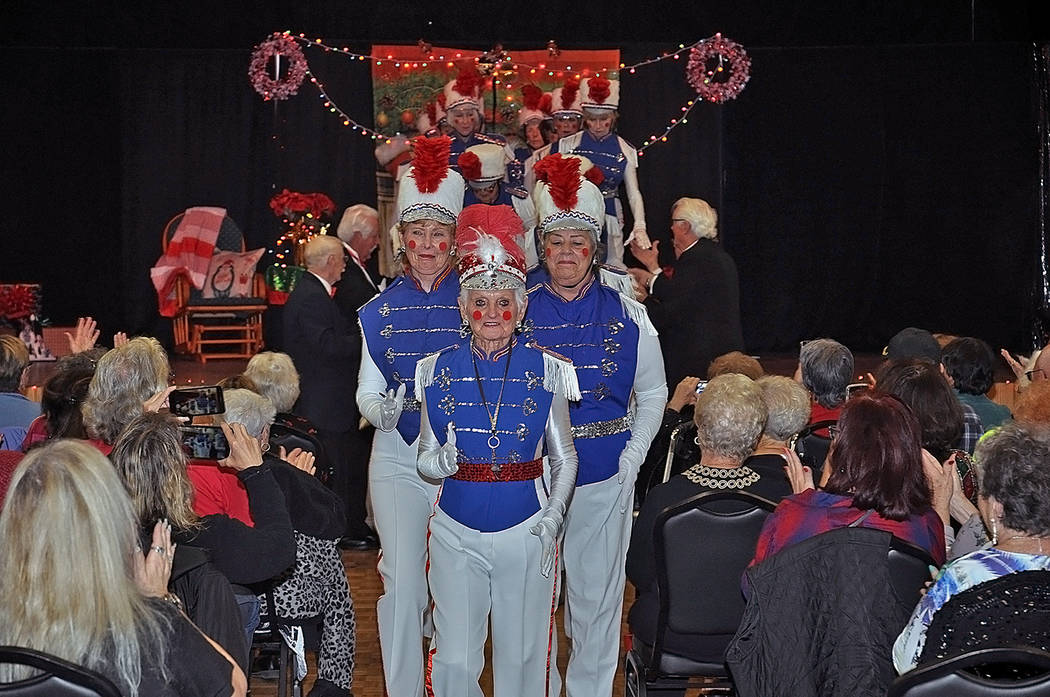 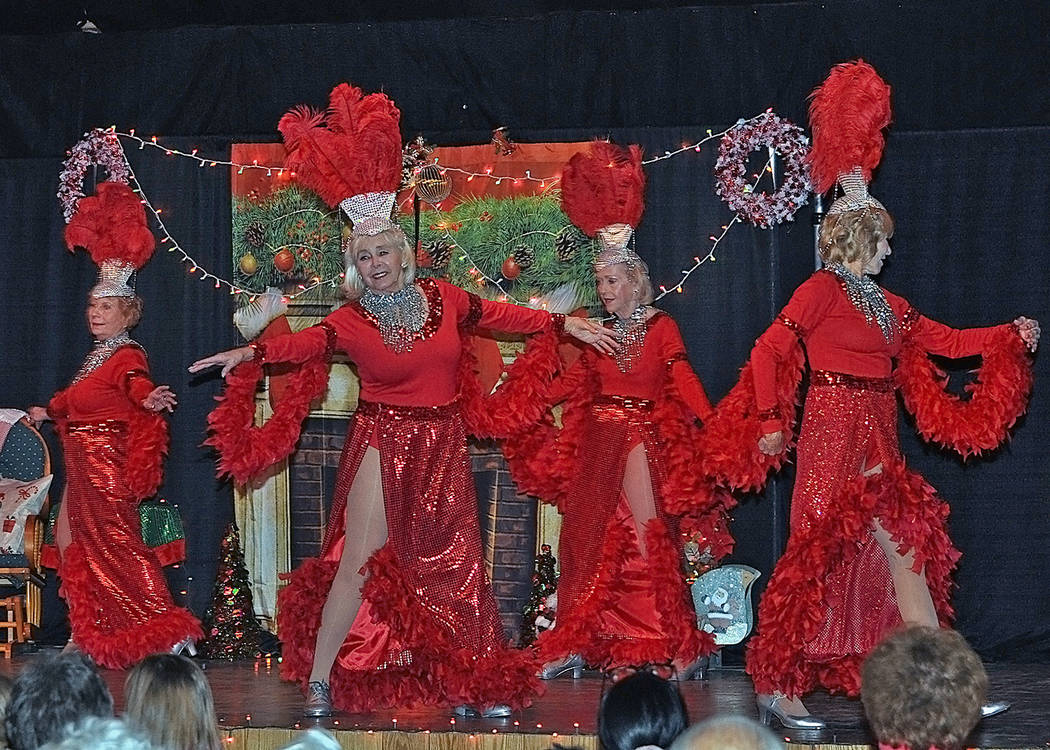 Horace Langford Jr./Pahrump Valley Times The Nevada Silver Tappers sparkle and shine as they dance their way across the stage at the Christmas Benefit Show. 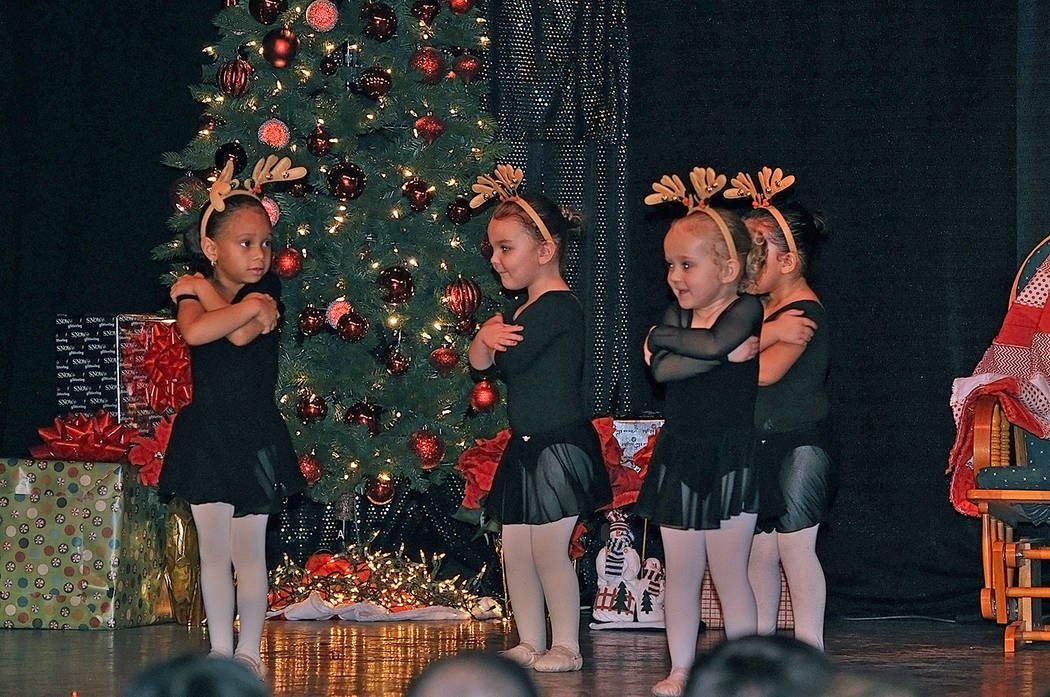 Horace Langford Jr./Pahrump Valley Times Donna's Angels from Donna's Dance Studio were an adorable addition to the Christmas Benefit Show, inspiring many exclamations of "aww" from a highly enthusiastic audience. 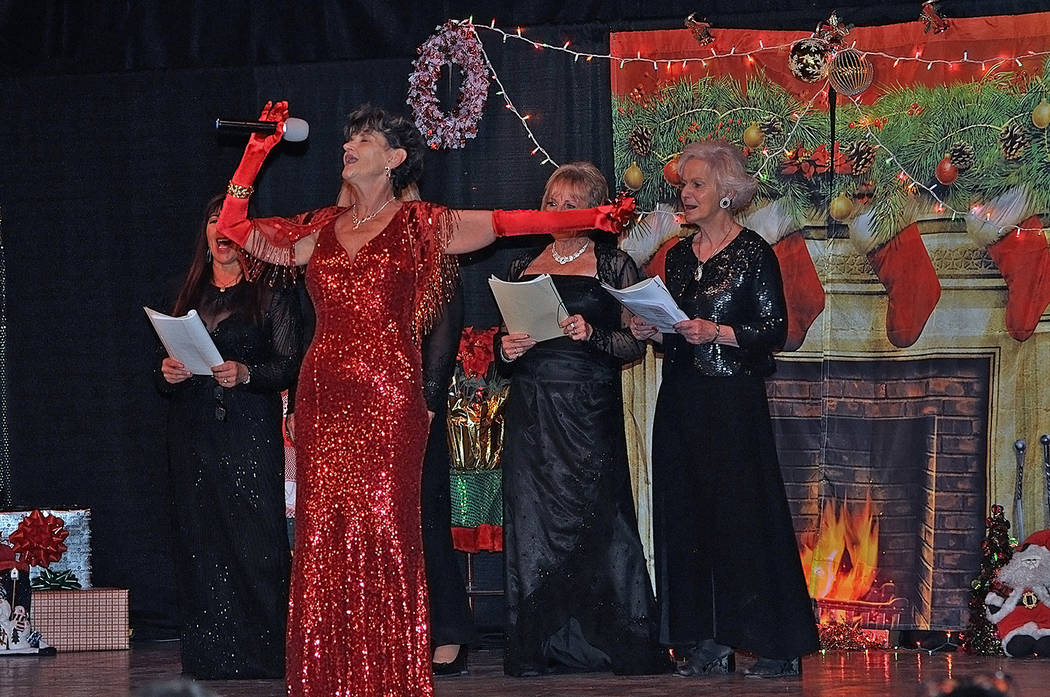 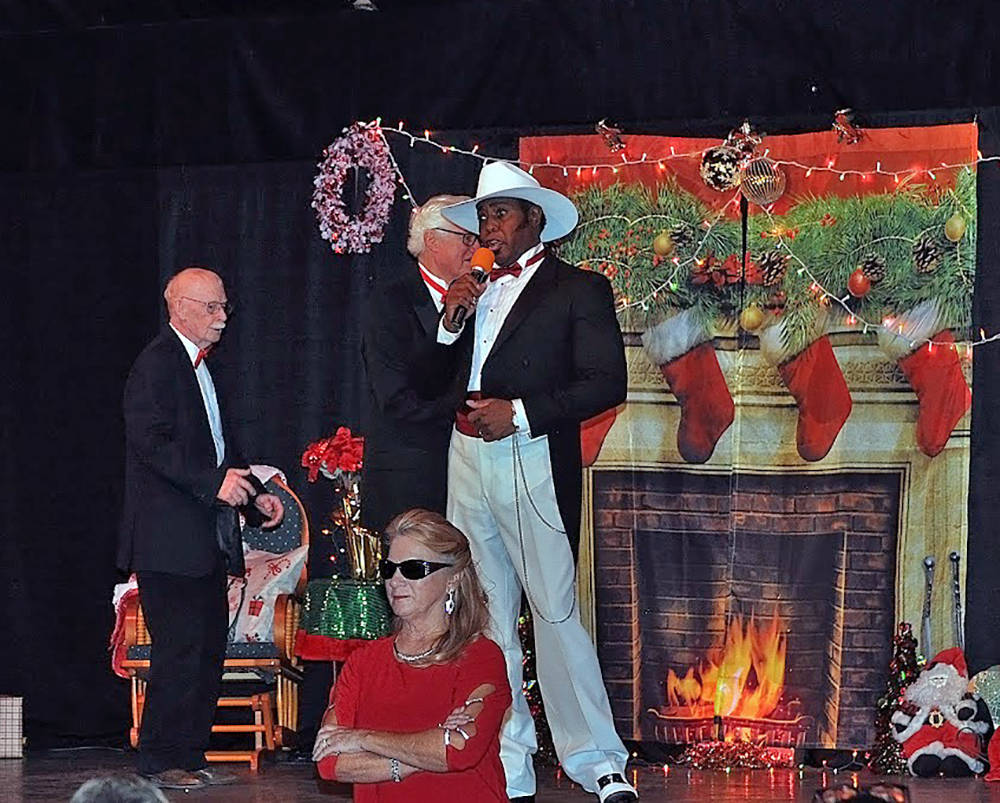 Horace Langford Jr./Pahrump Valley Times Mr. Hunk from Pahrump Ben Fluker and the other Pahrump hunks were guarded from overly excited women in the audience during their performance at the Christmas Benefit Show.

It’s Christmastime in Pahrump and the spirit of the season has enveloped the valley, with all sorts of fun and entertaining events for area families to enjoy hosted throughout the entire month.

Helping kick off the season in true holiday style were the ladies of the Nevada Silver Tappers, who hosted the 29th Annual Christmas Benefit Show earlier this month with all the shimmer, sparkle and song that are such a quintessential part of the beloved holiday.

Christmas Benefit Show attendees were welcomed into the Saddle West Showroom on Dec. 7 by a bevy of excited ushers, while the voices of the members of the Ms. Senior Golden Years Choir floated gently through the room.

Once all had settled in for the afternoon, the Silver Tappers trooped onto the stage to open the show with a tribute to the men and women who serve and have served in the U.S. armed forces. Girl Scouts had the solemn duty of presenting the colors, marching forward to hoist the American flag into the air while the sold-out audience recited the Pledge of Allegiance.

Following an invocation by Pete Gazsy, the talent took over the stage, beginning with Ms. Senior Golden Years Queen Laraine Babbitt and running through a program that included an array of song and dance, along with a healthy dose of comedic entertainment, adding notes of riotous laughter to the overall atmosphere of holiday cheer.

Longtime Christmas Benefit Show performers were back for another year, including Bill Watson, the Silver Tappers, Ms. Senior Golden Years members and more. Youngsters from Donna’s Dance Studio made their second appearance this year.

There was plenty of new entertainment that afternoon as well, with the Downbeat Music Lab bringing its Bell Choir, the High Desert Line Dancers performing to “The Angels Cried” and the men from the inaugural Mr. Hunk from Pahrump Pageant adding their own special seductive element.

Taking over the duties of master of ceremonies from her father, Steve, this year was Stephani Elliott, who happens to be a very proud granddaughter of Silver Tappers and Ms. Senior Golden years founder B.J. Hetrick-Irwin.

With a bright and cheerful tone, Elliott kept a smooth and even pace throughout the show. She even became a part of the entertainment herself, charming the audience in between show segments with jokes, a recital of the famous poem “Twas the Night Before Christmas” and a listing of the Christmas wishes of the children in attendance, which ranged from a desire for snow on Christmas Day to a hope for toys to perhaps the most touching request of all, a simple wish for a Christmas tree.

As always, the show was capped off with the Nevada Silver Tappers’ performance of the Wooden Soldiers. With faces set in the stern, unsmiling expression of these classic holiday icons, the ladies marched on stage in regimented formation to dance one last dance before the night was through, drawing an enormous round of applause from the clearly appreciative crowd.

The 29th Annual Christmas Benefit Show was obviously an event filled with entertainment, but it was also one hosted for a good cause, raising funds to support local nonprofit efforts. In total, more than $4,100 was raised on Dec. 7.

The beneficiaries of this year’s show include Tails of Nye County, which operates a trap, neuter, release program for stray cats, as well as a spay and neuter assistance program for pet owners, and Sleep in Heavenly Peace, a nationwide organization with a Pahrump chapter focused on ensuring all children have beds of their own so they never have to sleep on the floor.

The Kiwanis Key Club, a student-led organization that gives its members opportunities for community service and personal development, is also a beneficiary, along with the Caregivers Retreat program hosted by Babbitt as part of her platform as 2019 Ms. Senior Golden Years Queen.