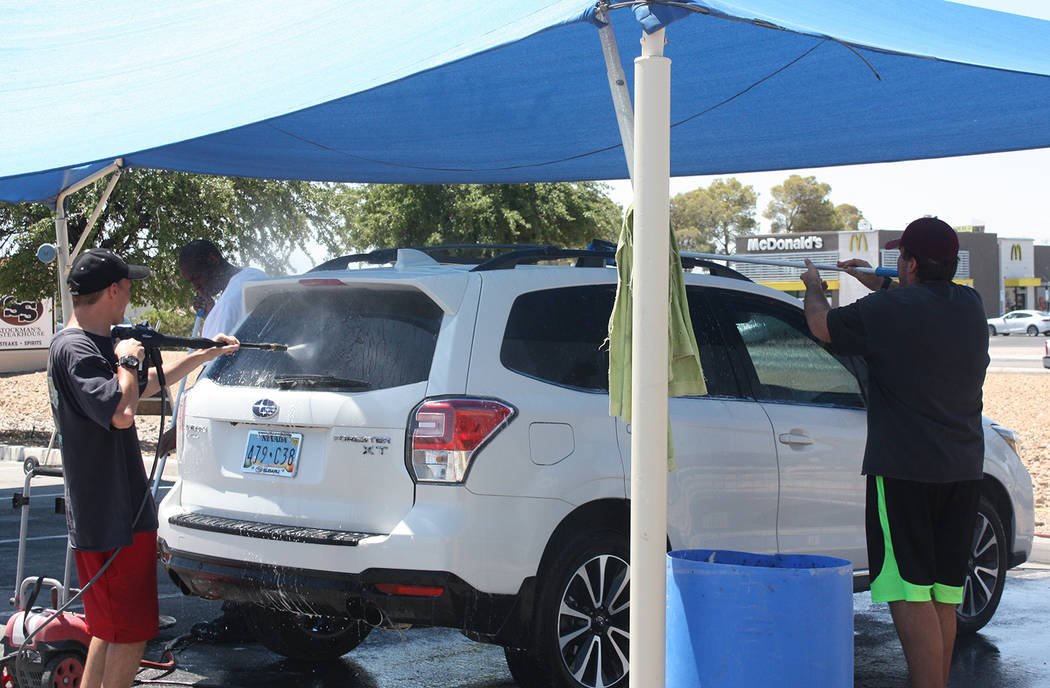 Robin Hebrock/Pahrump Valley Times Patrons were able to drive away in sparkling clean vehicles after visiting the Car Studio donation car wash fundraiser, held June 23 and 24. The proceeds of the event were donated to the Pahrump Disability Outreach Program. 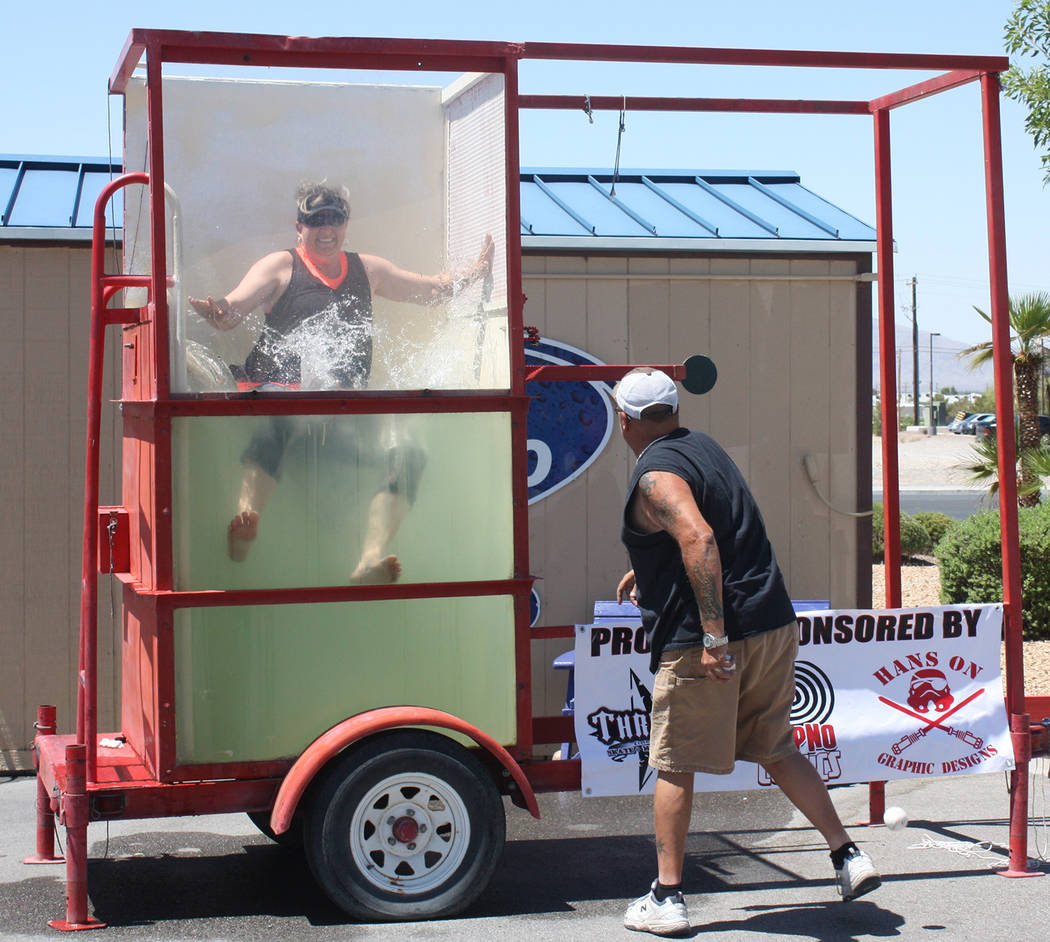 Robin Hebrock/Pahrump Valley Times Nye County Animal Control Officer Susan Ryhal is pictured falling into the water following an accurate throw at the dunk tank, which was part of the Car Studio fundraiser held on behalf of PDOP. 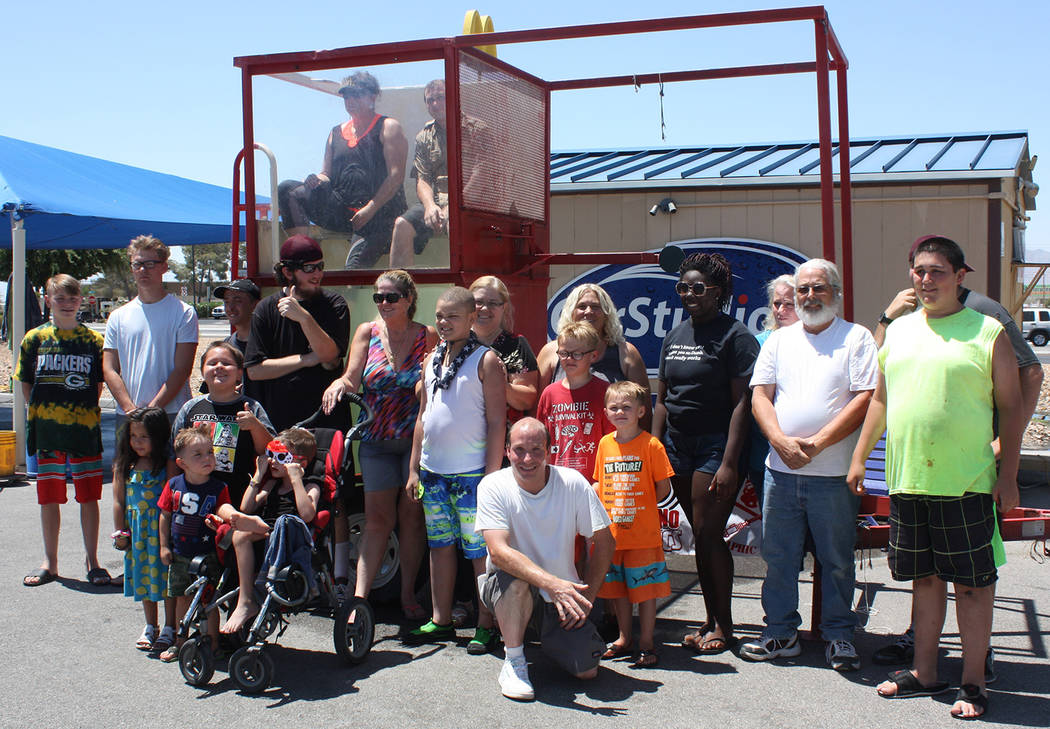 Robin Hebrock/Pahrump Valley Times Gathering together to pose for a photo, the many members and volunteers of PDOP were obviously enjoying their afternoon during the car wash fundraiser held to support the nonprofit. 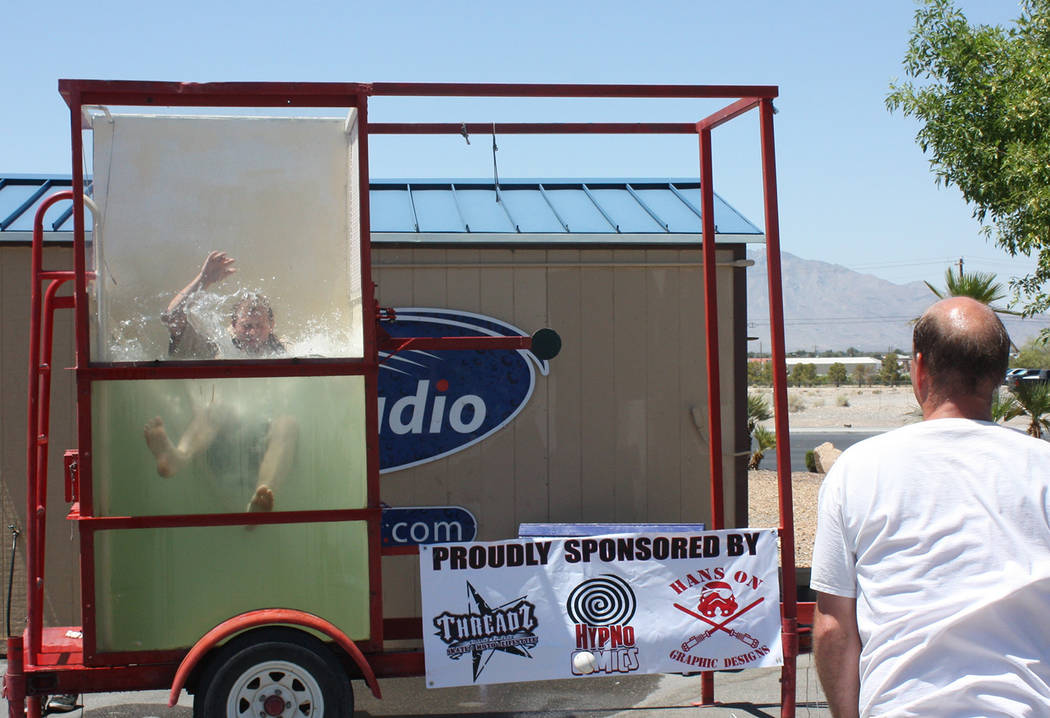 The Pahrump Valley may have been enveloped in scorching heat over the weekend but that did not stop Car Studio and the Pahrump Disability Outreach Program from having some fun during the inaugural Car Studio donation car wash fundraiser.

Held Saturday and Sunday, June 23 and 24, the fundraiser gave residents the chance to swing by, make a donation and have their vehicles scrubbed down, all while contributing to a valuable local nonprofit.

PDOP is well-known across the valley as a go-to for those with a disabled family member, providing support, friendship, encouragement and resources, and the group has also started a Skills Club. The organization relies on the generosity of the community to continue its mission and the Car Studio fundraiser helped add an extra $1,000 to PDOP’s coffers.

“The event was amazing,” PDOP President David Boruchowitz said after all was said and done. “The support of the sheriff’s office and the community was truly amazing and heart-warming. We are so appreciative!”

On Sunday, there were several PDOP members out at the event, helping clean up the many cars and trucks that came by as well as enjoying the day together. When not busy washing down the vehicles, everyone was also having a blast testing their aim at the dunk tank. Nye County Sheriff’s Office personnel were on hand to brave the watery depths. Even when the throwers were not on target, those sitting often plunged unsuspectingly into the water when others would playfully sneak up to pull the release bar, creating gales of laughter.

PDOP volunteer Daniel Smith was in charge of the activities and seemed to be having a great time directing the dunk tank. Smith encouraged Nye County Animal Control Officer Susan Ryhal to step up and take a turn in the tank for a photo opportunity and Ryhal readily agreed. People gathered around in eager anticipation and more bursts of giggling filled the air as she went splashing downward.

Lynne Sach-Johnston, leader of the PDOP Skills Club, was obviously thrilled to be out at the fundraiser having a good time with the youngsters and the generous patrons. She remarked that the Skills Club gives PDOP members a productive way to express themselves and hone their many and varied talents. As an example, Sach-Johnston showed off some Christmas ornaments crafted by the members and detailed their most recent project, “positive rocks.”

“In the next couple of weeks, people can look around Ian Deutch Memorial Park for the kids’ positive rocks. The Skills Club kids did that last weekend,” Sach-Johnston said. The rocks are decorated Minions-style in honor of the Despicable Me 3 movie, which Sach-Johnston noted the group planned to go see during the town of Pahrump’s Movies in the Park. “It’s just a fun way for them to do something artistic!” she enthused.

In addition to fostering creative pursuits, the PDOP Skills Club focuses on helping members in the teens or older learn and improve life skills that will, in turn, assist them in integration with society and help them succeed in life activities.

“Special thanks to Sheriff Sharon Wehrly and her staff, Ron from Threadz, Shamus and Tim from Car Studio, all the PDOP members and especially Daniel, who helped put it all together,” Boruchowitz said. “And as always, thanks to the community for their outpouring of support.”