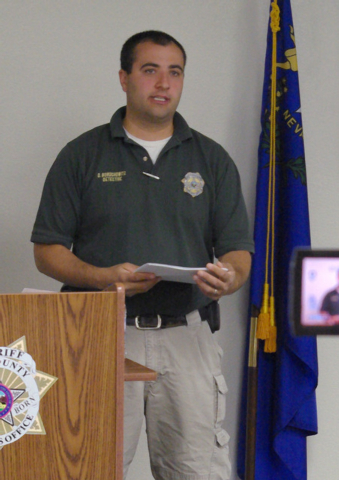 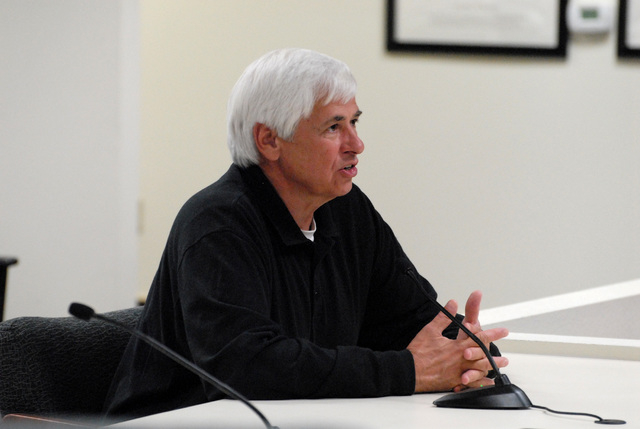 At least two of six deputies out on “stress” leave have returned to active duty after being cleared to do so by a county psychologist last week.

Detectives David Boruchowitz and Harry Williams returned as early as Sunday. Four other deputies — John Kakavulias, Christopher Gelson, Adam Tippetts and Logan Gibbs — continue to be out on leave. Brian Jonas, another deputy who left in the aftermath of the April 22 arrests of Asst. Sheriff Rick Marshall and NCSO volunteer Ben Gulley, resigned instead of returning to work.

Two weeks ago the Pahrump Valley Times reported that the deputies likely wouldn’t return to work until August. Also, the PVT revealed details of a still-secret report generated by the Nevada Department of Public Safety Investigations Division, which conducted a query into allegations that Boruchowitz had coerced a woman into filing a false complaint against the wife of a former public defender to her employer, the school district.

The report allegedly also implicates former Capt. Bill Becht, the detective’s supervisor at the time, in the mishandling of evidence in that earlier investigation, which consisted of amateur sex tapes involving two women, a mother and daughter, who were arrested together and charged with multiple criminal acts.

Williams, sources told the newspaper, allegedly admitted to investigators that he purposely misled them. The accusation is serious enough that if proven could cost the detective his job. In 15 years on the force, it is the first time Williams has been in trouble, a source confirmed.

Asked about returning to work, Williams said he was happy to be back and had the support of Sheriff Tony DeMeo in his return.

“I am happy to be back to work. One of my first tasks was finding and apprehending (Johnathan Ross) Moncada who had escaped from jail. I met with Sheriff DeMeo and had his full support,” Williams said via email. He referred to an arrest made Tuesday afternoon involving a man who left a work-release program on Saturday and now faces felony escape charges.

Boruchowitz also confirmed via email that he had returned to work. He used the opportunity to deny ever taking leave in the first place.

“I can confirm that I have returned to work. I never asked to take leave despite what you have been told and am glad to be back to work,” Boruchowitz said via an emailed response to questions.

DeMeo chuckled when asked to respond to the detective’s statement that he never voluntarily took leave.

“Those are very interesting comments being made,” he said.

The sheriff says it was refreshing when the detective, who also is union president for the Nye County Law Enforcement Association, was not at his post because there were no pesky union grievances to deal with.

Boruchowtiz, through the union’s attorney, Brent Huntley, disputed DeMeo’s assertion that there were no employee grievances while Boruchowitz and the other deputies were out. The deputies allegedly walked off their jobs, even filed workers compensation claims that were reportedly denied, about a month after Marshall and Gulley’s arrests.

“The first grievance I got was the first day they came back,” he said. “I can go back to my email and there is nothing and you can put three exclamation points behind that. I got zippo, zilch, nada, nothing.”

He added that if Huntley were a deputy he’d be brought up on charges for being untruthful.

“Maybe that’s why they made that statement through their attorney,” he said.

The sheriff says the first grievance he received when Boruchowitz returned was an accusation that he and other administrators leaked sensitive information about the Investigations Division report to the PVT. So far, he has received at least three separate employee grievances since the detective returned.

Huntley backed up the claim about the first grievance.

“I can specifically confirm at least one grievance has dealt with the release of inaccurate and confidential information to the media,” he wrote in his response to questions.

DeMeo has refused to comment on the specifics of the Investigation Division’s report or to comment on punishment Boruchowitz and Williams may face. He also did not comment on any internal affairs investigation involving the deputies who orchestrated Marshall and Gulley’s arrests.

A separate investigation into allegations Marshall and Gulley stole $6 worth of political signs aimed at defeating Marshall’s bid to replace DeMeo in November is reportedly complete or close to it. A call to the Nevada Attorney General’s Office, which would likely prosecute Marshall or Gulley if sufficient cause was found, was not returned by press time.