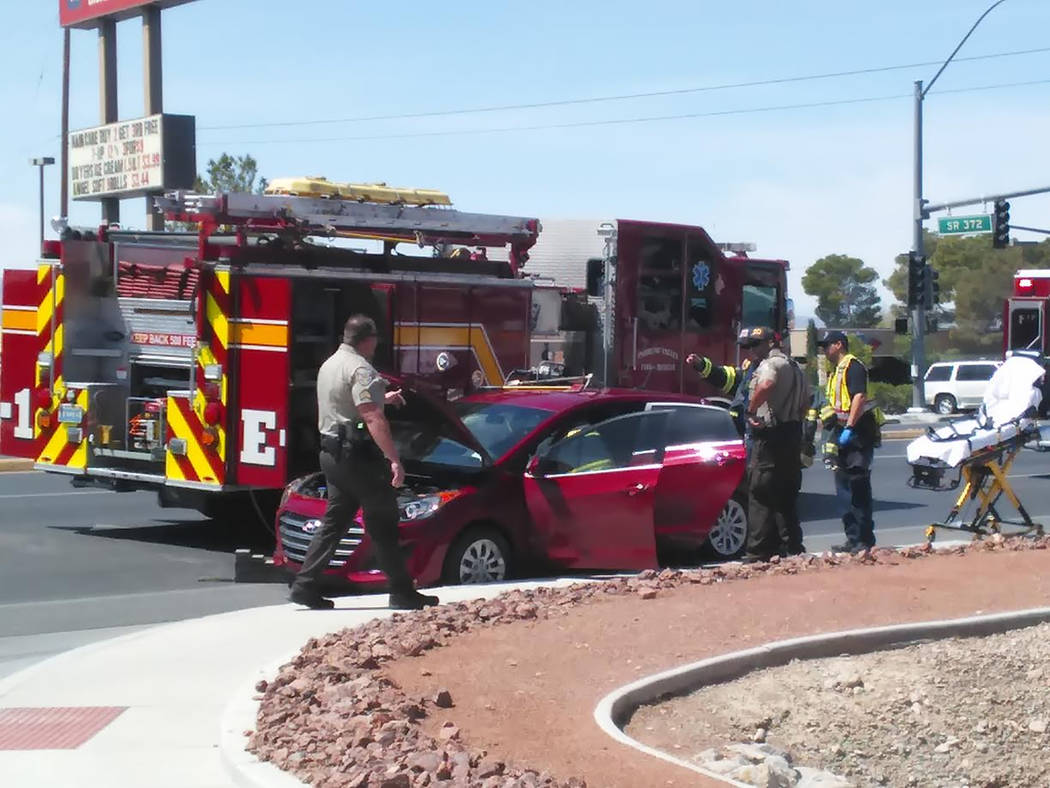 Selwyn Harris/Pahrump Valley Times Fire Chief Scott Lewis said crews were forced to remove a door on one vehicle to free a person trapped inside the vehicle. After assessing the passenger, it was determined the person required transport to UMC Trauma in Las Vegas.

At least three people were transported to Desert View Hospital following a two-vehicle collision at the intersection of Highway 160 and 372 Wednesday afternoon, just before 1 p.m.

“Upon arrival, we found a two-vehicle, T-bone type collision,” he said. “We completed (a) scene size-up and risk assessment and in doing so we found that we had at least three injured persons and we also found one of the occupants was mechanically entrapped in his vehicle.”

As a result, Lewis upgraded the assignment to a rescue, by adding two additional medic units, and an engine unit to the scene.

Crews then completed a passenger-side door removal, where the patient was extricated and moved to a medic unit.

After further assessment, it was determined the person required transport to UMC Trauma in Las Vegas.

A landing zone was established on the highway in front of Gold Town Casino after NHP and Nye County Sheriff’s deputies shut down Highway 160 in both directions while diverting traffic through a parking lot.

“Patient care was transferred to Mercy Air and that patient was flown to UMC Trauma,” Lewis said. “The other two occupants who were injured were subsequently taken to Desert View Hospital where I understand one was later transferred to UMC Trauma as well. We had to shut down the highway for a while because it was the most prudent thing to do in order to bring the helicopter to the scene. The roadway had no overhead obstructions.”

One man named Steward, actually witnessed the collision as he was near the intersection.

He said the collision was very loud and forceful.

“I saw the red Hyundai going south on Highway 160 and attempting to turn left on Crawford Street,” he said. “The black Mustang was going north on Highway 160 through the intersection and T-boned the Hyundai. It was a very nasty collision.”

Then he said he quickly pulled over and attempted to help a woman who appeared dazed and confused.

“One lady got out of the black Mustang and looked like she was going to fall down. I pulled over very quickly to try and render aid,” he said. “Her husband and I helped her over to my car where she had somewhere to be safe. She was complaining of chest pains and neck pains. The whole thing was surreal as I watched it. We are all supposed to help each other in a civilized society.”