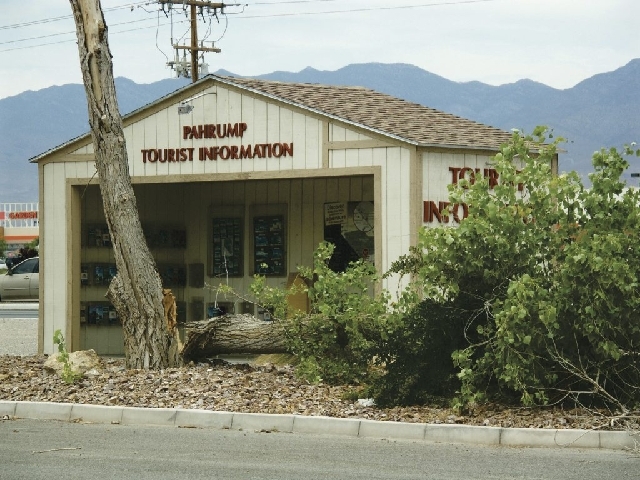 According to the weather forecast, local residents were expecting inclement weather last weekend but they did not expect the damage Saturday’s windstorm wrought.

The front whipped though Pahrump, overturning trees, downing power lines and blowing debris across the valley.

The National Weather Service in Las Vegas clocked winds up to 80 miles per hour in the Pahrump Valley as the storm made its way in a northwesterly direction from southeast Clark County to Nye County.

One location that was in the direct path of the storm was the Calvada Eye, with its big trees and usually serene duck ponds.

On Sunday morning pine cones and needles littered the pavement while large limbs snapped off trees hung precariously above the park floor.

Nye County Commissioner Butch Borasky, who was not in town at the time, said he personally contacted Buildings and Grounds Department Manager Bob Jones about the mess created by the storm.

Borasky noted what may be done to prevent future damage to the aging trees at that location.

“He brought in some guys on Sunday and cleaned it all up. He did say that he would be bringing something forward to the board to possibly take some of those trees out because they keep breaking every time there are high winds,” he said.

In April, a town board meeting was interrupted when a large section of a tree snapped off and crashed into the parking lot near the county administrative building.

“I went over there when I got back into town and noticed that most of it was cleaned up. There weren’t any broken tree limbs laying around but there was still a lot of debris on the ground. I will know more later when I see what the plan is on that. We have some really old trees there and that was some really horrible wind,” Borasky said.

Other parts of the valley saw wind damage as well.

Town of Pahrump Buildings and Grounds Manager Matt Luis said his crews were also working fervently to clean up damage at area parks and other locations as a result of the system passing through.

Luis noted that an old tree adjacent to the tourist information kiosk near the Bob Ruud Community Center fell victim to the storm.

“There was an old cottonwood tree by the kiosk that we lost. It was diseased. Another tree that was dying at Ian Deutch Park we also lost, but pine, the pine needles were a big problem. The winds just blew them all in front on the Bob Ruud Center and we spent hours cleaning up pine needles on Monday. At Petrack Park we had the Mulberry tree by the horseshoe pit that was kind of twisted to the side. We straightened it up so I don’t think we lost that one. Petrack was the worst one that was hit. As far as damaged trees, I think we did pretty well, all things considering,” he said.

In Mountain Falls, at least a half-dozen if not more trees were felled along the golf couse, snapping right where the tree trunks met the landscape.

Luis said efforts will be made to restore some of the town’s trees.

“We will probably replant the tree lost at the tourist information kiosk. We have kind of been already planting the cottonwoods, which live to about 30-to-40 years,” he said.

The buildings and grounds manager said some of the trees adorning local parks are suffering from a condition caused by insects that essentially shortens their lives.

“A few years ago they got infected by insects that burrow inside the bark of the trees and now some of them are dying off from the inside and we are replacing those. Whenever we get an opportunity and it’s the right time, we come in with a better tree than the cottonwood. Something that is a little more heartier,” he said.

Laine Brubaker from Brubaker’s Tree Service said she and her husband may see an increase in business in the next few days and weeks.

“We are off on Sunday and Monday but I saw trees all over the place that were down across town,” she said.

Brubaker, who is a member of the International Society of Arboriculture, also spoke about the culprit that is shortening the lives on many trees around the valley, especially the cottonwoods in area parks.

The parasite in etymological terms is known as the “Borer.”

“They get into the tree and lay their larva which makes its way through the tree in what is known as the cambium layer. That is basically the vascular system that feeds the tree and it is directly beneath the bark. When the borers get in the nice soft wood, they lay their eggs and the larva makes its way through by eating the tree. As they eventually come out as adults, they weaken the tree by disrupting the vascular system,” she said.