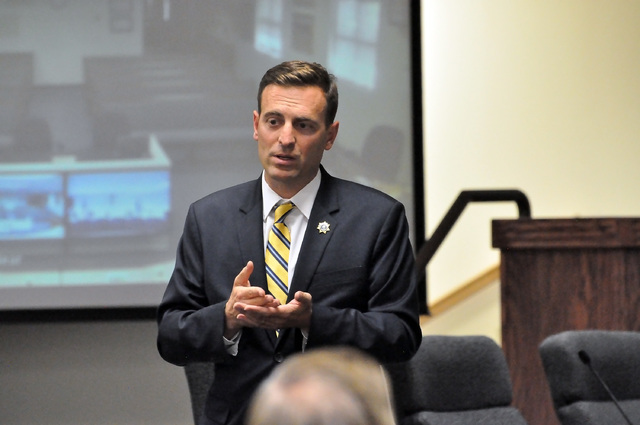 State Attorney General Adam Laxalt, who visited Pahrump in September, has not announced if he intends to run for governor. Horace Langford Jr./Pahrump Valley Times

Laxalt filed his campaign finance report for 2016 on Monday, reporting large campaign fundraising numbers that could be used for a governor’s race. Laxalt, in his first term as attorney general, is widely viewed as a potential Republican contender for governor in 2018.

Laxalt has more than $1.5 million cash on hand, said Robert Uithoven, a consultant for Laxalt. The campaign money could be used for either a re-election campaign as attorney general or a bid for governor, Uithoven said.

“That decision is yet to be made, but Laxalt’s viability for a successful campaign in either office is without question,” Uithoven said Monday in a conference call with reporters.

Uithoven didn’t have a time frame for when Laxalt will make a decision and said campaign donors haven’t been told Laxalt is running for governor.

“Not a single donor on this report has been told that these contributions are specifically for the governor’s race,” Uithoven said.

Laxalt was a litigation and government affairs attorney in Las Vegas for Lewis and Roca LLP before he was elected attorney general in 2014. He also was a judge advocate general in the Navy from 2005 to 2011.

The Laxalt name is familiar in Nevada politics. Paul Laxalt, Adam Laxalt’s grandfather, was governor of Nevada from 1967 to 1971 and later served two terms in the U.S. Senate.

Clark County Commissioner Steve Sisolak, a Democrat considering a run for governor, said Monday that he has “a little more than $3 million” cash on hand. He expects to announce his intentions by the end of April.