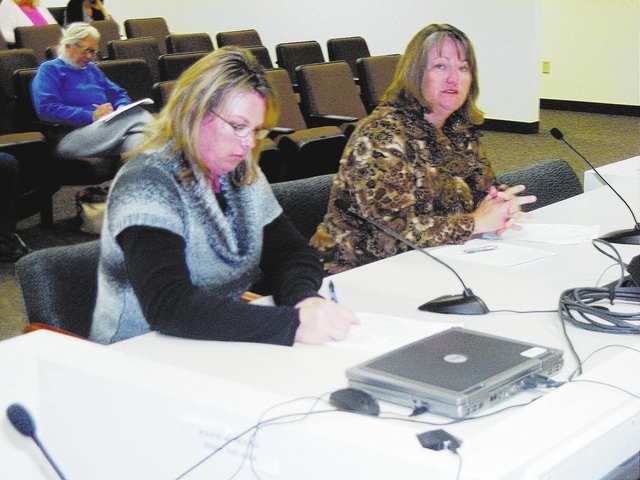 TONOPAH — Nye County will forward requests for $45,000 for an energy conservation rehabilitation of the new Amargosa Senior Center building, $58,000 for a water resource plan for the Beatty Water and Sanitation District and $8,000 for Health and Human Services computer kiosks for consideration under the federal Community Development Block Grant program.

The U.S. Department of Housing and Urban Development annually provides $2.5 million to $3 million in grants on a competitive basis to 26 non-entitlement cities and counties in Nevada, those with less than 200,000 population. The program benefits low to moderate income areas.

Nye County Grant Administrator Amy Fanning said requests by the Rural Nevada Development Corporation for $50,000 for housing rehabilitation is a non-competitive grant that county commissioners can approve for consideration.

The applicant left out of the loop was the NyE Communities Coalition, which submitted two applications, one for $50,856 to make improvements at the former Manse Elementary School multi-purpose building, the other $10,440 to teach integral workplace skills for job seekers.

Jack Syfold, project coordinator for the new Amargosa Valley Senior Center building, said the new senior center is set on a foundation, the back-fill is completed, flooring has been installed and they replaced a lot of metal siding, Syfold said with the help of 1,000 hours of volunteer time. But still, he said the building resembles the modular trailers that are waiting to be assembled on the Calvada Eye for the new One Stop Shop center.

The building is ready for refrigerator installations and interior wall framing, Syfold said. They want CDBG funds to help make the building more energy efficient by adding exterior wall and roof insulation, along with a stucco finish, so it more resembles finished modular assemblies like the county administration buildings or the Health and Human Services building. Besides the CDBG money, proponents will try to raise $20,000 in a fundraising drive that begins in the Christmas giving season.

When Commissioner Dan Schinhofen asked how many people regularly go to the Amargosa Senior Center, Syfold said they serve meals to only about 10 to 20 people, with another 10 or 12 meals going to the homebound. Fanning said the 2010 census estimated there were 445 seniors in Amargosa Valley. But senior center committee member Diane Brigham said one day last spring they served 52 meals, so there’s a potential to serve more seniors, particularly with a bus acquired from the Nevada Department of Transportation.

Curt Swanson, representing Farr West Engineering, said water resources are critical to communities like Beatty. He said the $3 million Beatty has been able to acquire in funding for their water system just scratches the surface.

Besides the grant, Beatty would supply another $10,000. The plan would look specifically at Beatty’s water needs and the aquifer. It would also put policies on water rights in place.

The application states Beatty depends on limited groundwater resources, but doesn’t have a written long term plan regarding their protection and development. The application states hydrographic basins to the north and south of Beatty are experiencing a depletion of the aquifer at rates significantly greater than the recharge, the state engineer is considering curtailing water rights.

Assistant County Manager Joni Eastley said if approved, health and human services kiosks would be set up at the Pahrump HHS building conference room, the Tonopah HHS building and the Beatty courthouse lobby. The application states with Nye County being the third largest county in area, the kiosks will eliminate the need for face-to-face assistance from a county eligibility worker. New and current clients can use the kiosks or any personal computer to fill out and print forms, enroll in the state health care exchange or seek additional information on a variety of county, state and federal social service programs.

Esmeralda County would also be served. The county HHS department assists that county with Medicaid, food stamps and Temporary Assistance to Needy Families. Eastley said the Nye County HHS department served 658 clients, but that’s only those clients who are eligible to receive service. She said the $8,000 requested was “a small amount for a very big benefit.”

Stacey Smith, executive director of the NyE Communities Coalition, said $50,856 in CDBG funds would include $40,000 to retrofit the heating and air-conditioning system in the old Manse Elementary multipurpose building, which is leased from the Nye County School District so it can be used the entire year. The coalition wants to spend $1,200 to repair the commercial oven, which is used for community events and culinary training. They also want to have an area outside the training rooms at the multi-purpose building to eat lunch for students enrolled in the Brownfields program and the Dress for Success training program.

“What this will do is basically bring the facility up to a standard where we can put it to more use,” Smith said. The building is not only used by coalition staff but partners like Project Hope for storing commodities for their food bank. It’s also used for training, meetings, classes and Health and Wellness Fairs.

The application states there are on average 100 individuals on the campus every day, the vast majority of their projects require participants to qualify as low income, unemployed or underemployed. Smith said they served a little over 3,000 people this last year with various programs for which documentation is required.

While the coalition received grants for the Brownfields program, there are still gaps in training to teach basic skills to people to obtain and keep employment. That includes basic communication skills with their supervisors and peers, along with basic computer skills.

Abel said the RNDC is currently working on five homes in the housing rehabilitation program, two are in Nye County.