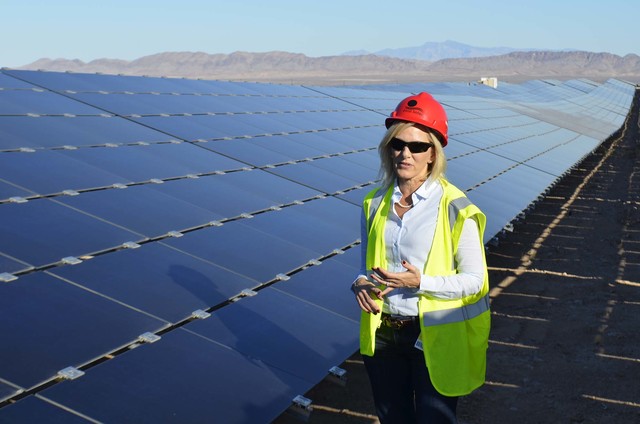 A large solar project in Amargosa Valley recently cleared a hurdle: To whom the energy will be sold.

The Sunshine Valley Solar Project had its power purchase agreement approved by the California Public Utilities Commission in September to sell to Southern California Edison.

“We have a fully regulator-approved power purchase agreement with Southern California Edison, said Melanie Falls, a consultant for San Francisco-based First Solar, who is building the site. “Even back in July, the project was very well advanced. We’ve already received all of our required environmental permits.”

First Solar is developing an approximately 100-megawatt alternating current solar project that will be located on 745 acres of private land in Amargosa Valley.

“Amargosa Valley is actually in an area of Nye County that doesn’t have any zoning, so we are working with Nye County to figure out what the requirements specifically are for that location but we will be pursuing those permits closer to the start of construction, because most of those permits have a shorter duration,” Falls added.

Laura Abram, director of public affairs at First Solar, said the project’s photovoltaic panels will absorb the light directly from the sun.

“The sun hits the panel, it’s a semiconductor material inside the panel and creates electricity,” Abram said. “That electricity is then sent to a substation which then goes up to the grid and powers people’s homes.”

The Sunshine Valley Solar Project will be similar to the 250-megawatt alternating current Moapa Southern Paiute Solar Project that is located on located on about 2,000 acres on the Moapa River Indian Reservation in Clark County that was also constructed by First Solar.

The project, however, will be slightly different from Moapa Southern Paiute Solar Project as it’s expected to reduce the environmental footprint and increase energy efficiency, officials said.

“It’s going to be exactly the same concept, the only difference between what we are doing in Amargosa and here is the mounting structure,” Falls said. “So these panels are on mounting structures that stay in one place and are south-facing. The mounting structures that we would use at the Sunshine solar project track the sun, so they move very slowly with the direction of the sun and it increases your energy output per acre, so it actually reduces your footprint, which is a good thing from the environmental standpoint.”

Falls said the company’s goal is to hire as many Nevada residents as possible for the construction of the project.

“We are going to hold a couple of local job fairs, not only in Amargosa but also around Pahrump to try and solicit everybody that is qualified. There are a number of different types of jobs and some of them require more skills than others,” she said.

Officials expect to employ about 300 people on the construction of the project, and create up to five permanent jobs.

The First Solar Power Purchase Agreement with Southern California Edison requires a commercial operation of the Sunshine Valley Solar Project on Jan. 1, 2020. The construction is expected to start by February 2019.

The project will provide a showcase for the solar industry in Nye County, Falls said.

“Back in 2008, when there was an initial solar boom, there were a lot of projects that were proposed (in Amargosa Valley) and a lot of them fell to the wayside, because they were never able to get a Power Purchase Agreement, and I think that left a major disappointment for the community,” she said.

Abram said that the project will create a trained workforce in Amargosa Valley that will be later working on another project.

“When you are training people as we will be on this project, you are creating a skillset for people that they can use to apply to other solar projects as well,” Abram said. “When you work on a solar project, it doesn’t just end when that construction period is done.”