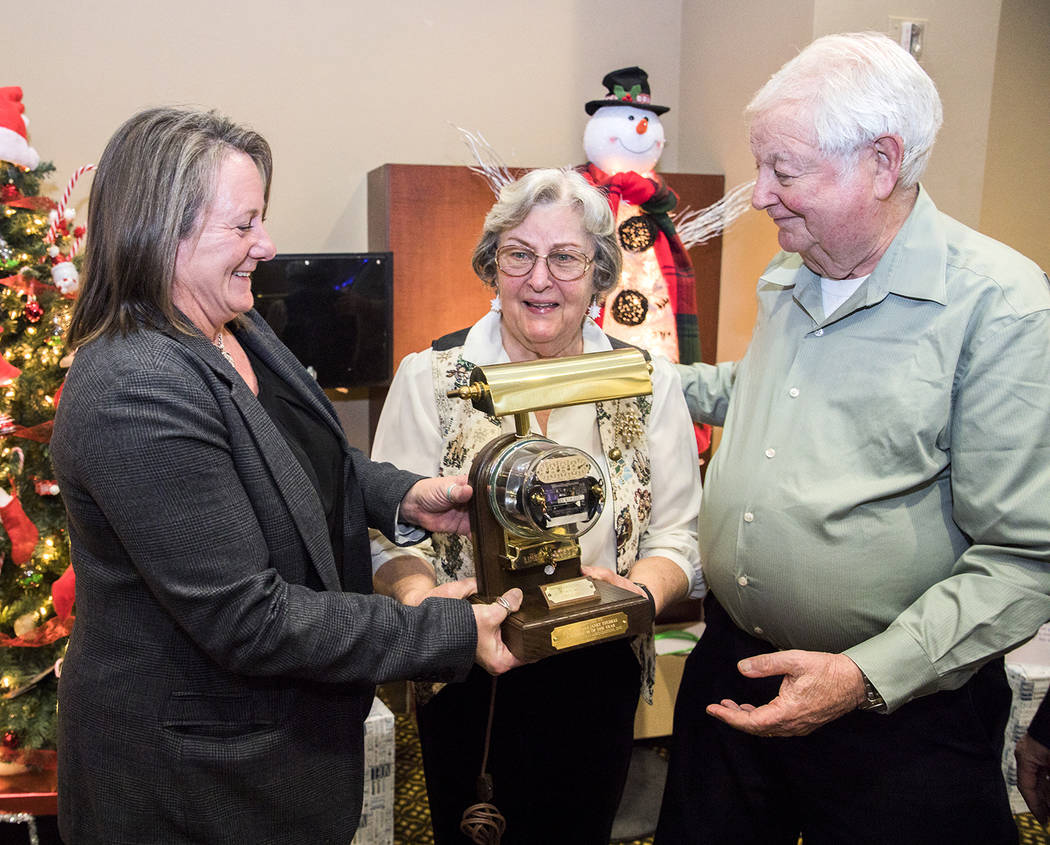 Special to the Pahrump Valley Times Kathie McKenna presents to Kenneth and Janet Thomas, the 2017 Ambassadors of the year award. VEA Ambassadors help to shape the company’s future, as well as improve the lives of its members and neighbors, the VEA said in its announcement. 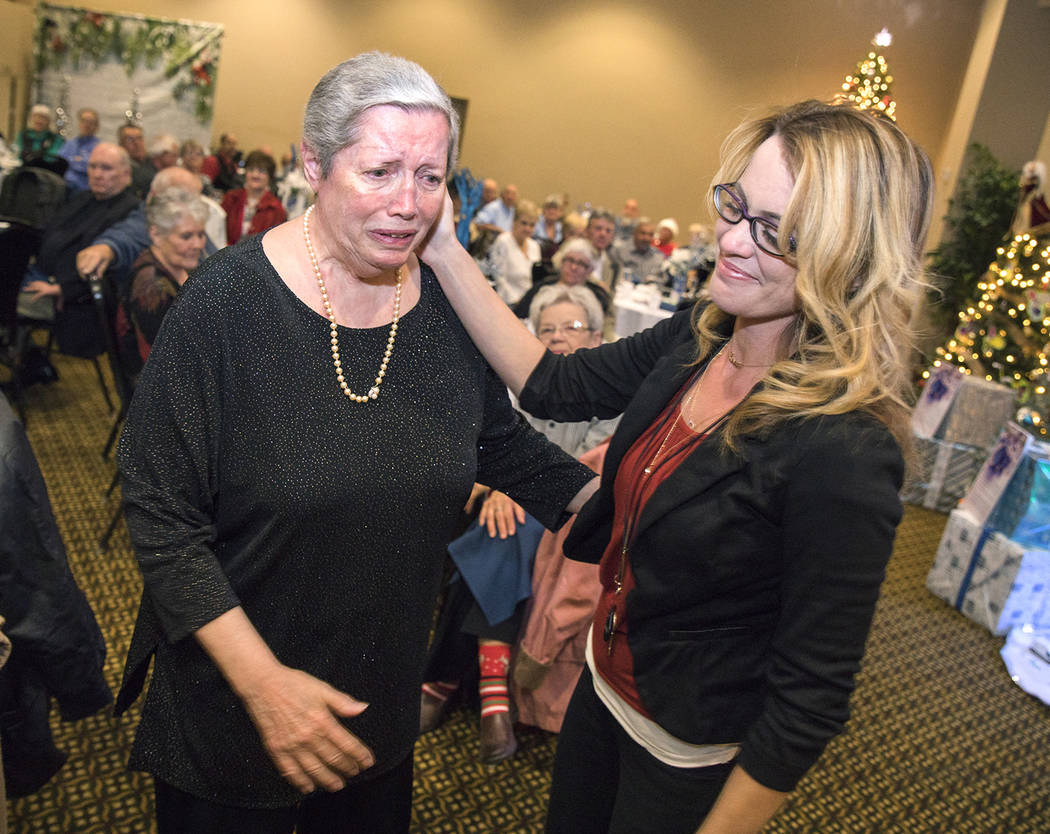 Special to the Pahrump Valley Times Belinda King, winner of the 2017 Heart Award, is congratulated by VEA official Cassandra Selbach. King was awarded the honor Dec. 13 at the event in the Pahrump Nugget. 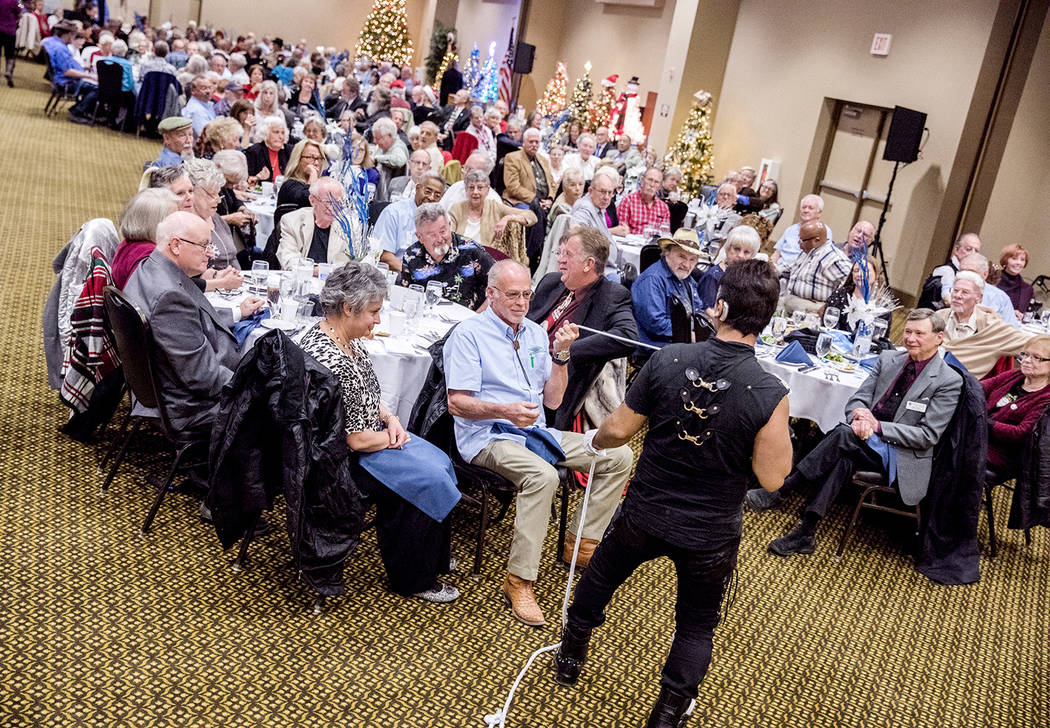 Special to the Pahrump Valley Times Entertainer and magician, Olly, entertains the crowd of more than 200 ambassadors at the 2017 Ambassador Christmas dinner and awards banquet at the Pahrump Nugget on Dec. 13. 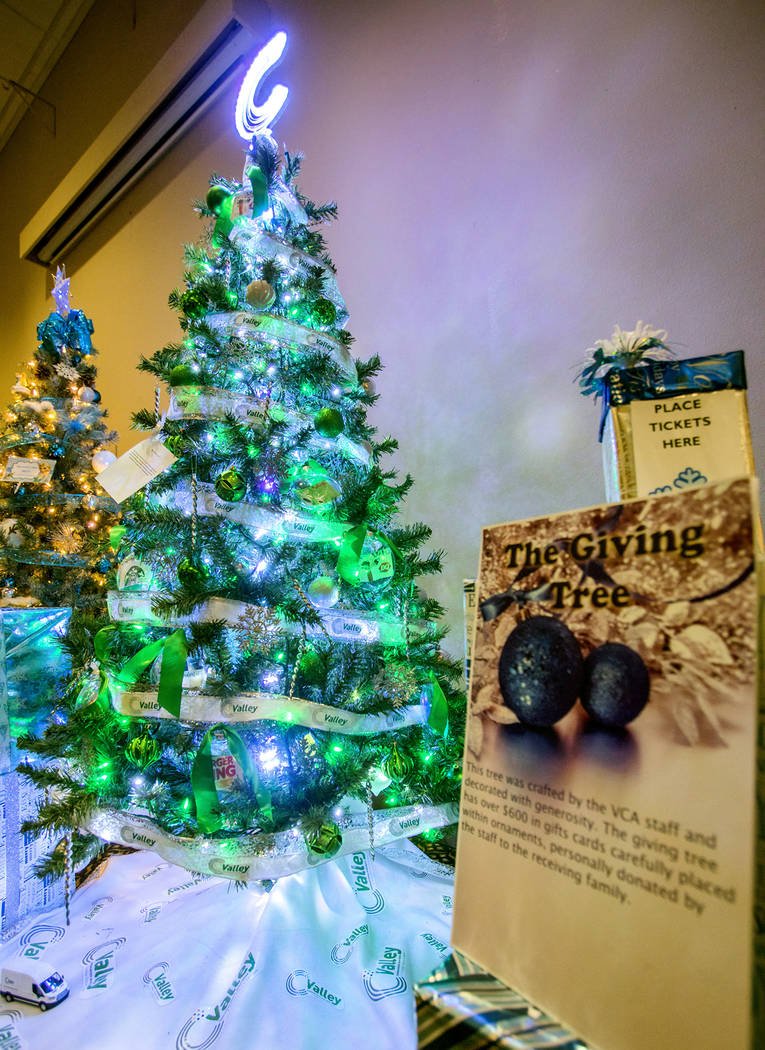 Special to the Pahrump Valley Times The winning Christmas tree was decorated by Valley Communications Association. The tree had $400 worth of gift cards hanging from it and was called the “Giving Tree.” That tree and seven others decorated by VEA employees were given to needy families throughout the valley. The Christmas trees also came with presents.

Nearly 225 ambassadors packed the event hall at the Pahrump Nugget for the Annual Valley Electric Association Ambassador Banquet and Awards presentation, which was conducted earlier this month, organizers announced.

The 2017 Ambassadors of the Year were Kenneth and Janet Thomas.

“We were totally surprised by this and this was totally unexpected,” Kenneth said with his eyes filled with tears of joy. “I want to thank the people, and the ambassadors, it’s a great organization.”

Kenneth and Janet have resided in Pahrump for the past 20 years.

Married 57 years, they retired to Pahrump from the Denver area to escape the weather.

Janet had been a registered nurse, spending the last 20 years before retirement teaching nursing for the Denver public school system at the Emily Griffith Technical College.

Kenneth retired from the Bell Telephone Company as an engineer.

He spent 39 years working for the phone company, and his last assignment with them was working to install fiber-optic cable.

The Thomases fell in love with Pahrump back in the 1970s when they began looking for a new home.

They were among the small group of VEA member-owners that helped develop the ambassador program more than a decade ago and have been active in the program since.

“When we first got here, we didn’t even know they had the ambassador program and then we found out about it and joined it,” Janet said. “We liked the camaraderie and the information we get,” Janet said.

“We also just like explaining to new people what a co-op is,” Kenneth said. “There are many people who move here who don’t know what it is and it is just nice to help out.”

The Heart award, given to the ambassador who showed great strength and inspired others, was presented to Belinda King.

“King was told almost a year ago in March, that she had just three to four weeks to live,” said Kathy Mattocks, a former ambassador of the year. “But she said, ‘All I need is strong sense of possibility and I can beat this.’ ”

At the banquet on Dec. 13, ambassadors also were asked to pick a favorite Christmas tree from among eight decorated by VEA staff in the different departments at the co-op. The Valley Communications tree was judged to be the best and, along with the seven others, was given to a needy family before Christmas.

Since its implementation, the VEA Ambassador Program has proven successful in its goal to educate members about VEA and the electric utility industry, as well as foster involvement in the company and its programs within the community.

VEA ambassadors help to shape the company’s future, as well as improve the lives of its members and neighbors, the VEA said in its announcement.

Valley Electric said that its ambassador program has been recognized as an award-winning program within the electric cooperative world.