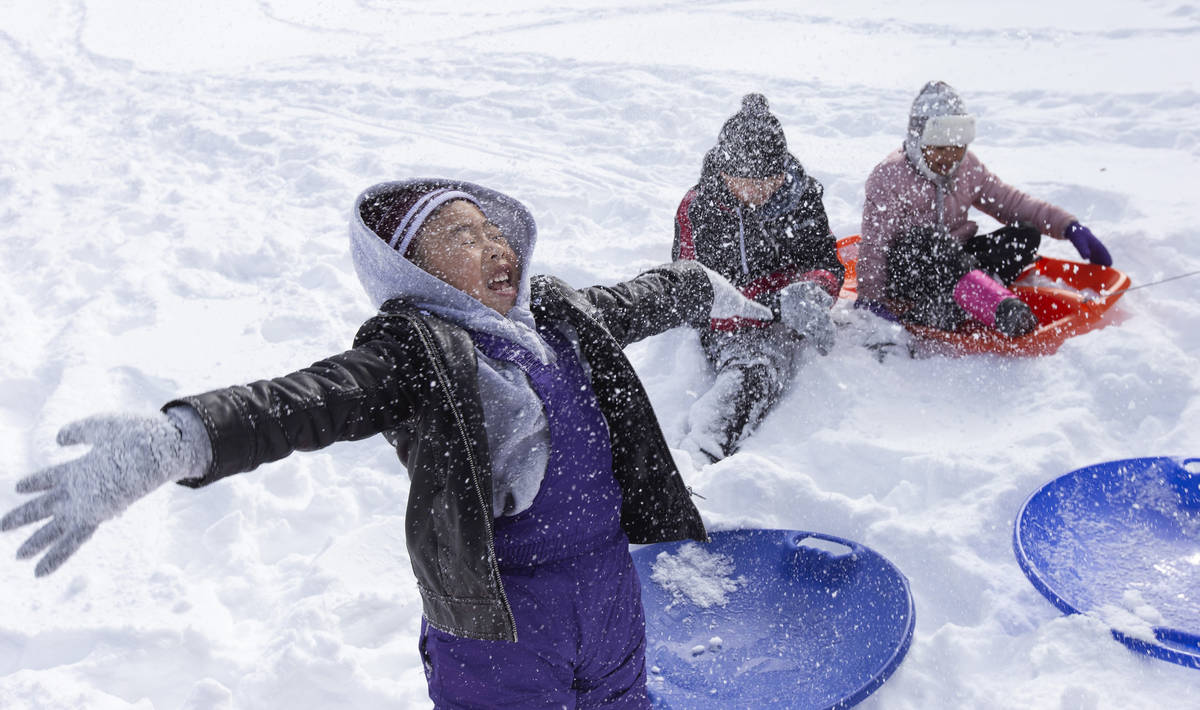 Snow. It is cold, wet, and it appears to be solid but quickly melts, becoming a small water droplet. In the northern latitudes and at higher elevations, snow is an everyday element of your daily life during the winter.

Living in those parts of the country that get frequent snowfall, you learn to live with snow. You have the right equipment to clear your driveway. You have warm clothing and tire chains or four-wheel drive vehicles.

Snow has also come to symbolize a part of how we traditionally portray the holiday season. Snow-covered trees, sleigh rides, Christmas cards, television commercials, and holiday movies are just a few examples of how snow has become an integral element of idyllic holiday winter scenes. Beautiful, but if you live with snow every day during winter, it loses some of that holiday luster.

It does snow in the Mojave Desert. After a winter storm, mountaintops may have a snow covering, but snow seldom falls in the valleys. Pahrump will periodically get a light snowfall in the winter. Just enough to give us a taste of what it is like for places where snow is more common, but the snow doesn’t stay around here long. Our above freezing temperatures and bright sunshine quickly melt the snow, turning it into water. For those who commute to Las Vegas regularly, snow over the pass at Mountain Springs can close the highway for a few hours while snowplows work to clear the snow. Drivers trying to go over the mountain pass during a snowstorm face a decision, wait the storm out or take the long way around to Las Vegas.

In 2008, the Las Vegas Valley had a record snowfall. At that time, I was working in my office near McCarran airport when the snow started falling. I was scheduled to fly out that afternoon, and I took a taxi to the airport. The terminal was filled with travelers and seemed somewhat chaotic as I walked into it. I looked at the gate notification reader board, and I saw that my flight, along with all other flights, had been canceled. The flight cancellations explained the chaotic scene in the terminal. I inquired with the airline staff about the nature of the cancellations, and I was told “the airport has no snowplows, it has no de-icing equipment,” so it was unsafe for planes to fly in or out of McCarran airport.

Taxis were in short supply, and I decided to take a public bus back to my office to pick up my car. I waited for the bus, and then I waited some more. No buses. Eventually, someone from the airport came by and told me that all buses had been canceled because of snow. Being raised in Northern Nevada, I was used to snowstorms, and it just didn’t seem like enough snow was falling to shut everything down. But that few inches of snow did indeed completely shut down Las Vegas for several hours. Finally, I was able to hail a taxi and get back to my office to pick up my car. From there, the great Las Vegas snow adventure continued. Driving out onto the street, I quickly realized that the other drivers on the road had no idea how to operate in the snow. Cars were sliding through intersections and spinning in circles as they tried to make turns. Panicked drivers slammed on their brakes, turning their vehicles into heavy and large ice sleds with no control over steering and braking. My everyday 25-minute commute turned into an hour drive as I worked to avoid drivers and their out-of-control vehicles. As quickly as the snow had fallen, it just as quickly melted, and by the next day, Las Vegas returned to normal.

Despite the chaos that a snowstorm can create in the desert, snow is essential to our state. In the north, the Sierra Nevada mountain range accumulates snow during the winter months. That snowfall melts in the spring and summer months, filling Lake Tahoe and the Truckee River, supplying water to the Reno area. In the southern part of Nevada, snow also provides water for Las Vegas. But it isn’t the snowfall in Nevada that supplies that water. It is the snow that falls in the Colorado Rockies. When that snow melts, it flows into the Colorado River, the primary water supply for Las Vegas.

Continuing this strange year of 2020, Las Vegas set a record for the most prolonged dry spell on record. Las Vegas received no measurable precipitation for 240 days, shattering the record set in 1959 by 90 days. The snowpack in the Sierras and the Rockies are currently below average, and if they stay that way, our statewide drought will continue into 2021. But just as unpredictable as was the 2008 Las Vegas snowstorm, a few significant snowstorms could completely change the water picture. Our snowpack’s largest accumulations occur in February and March, so our water resources still have a chance to catch up.

Oh, about those holiday movies. You know how the film will end before it starts because they all follow a predictable formula, but we still watch them. I wish they would pay more attention to the details when filming those snow-filled holiday scenes. The palm trees waving in the background with fake snow on the ground makes it a little harder to believe that the movie is taking place in a northern location unless, of course, you filmed the movie in Las Vegas in 2008.