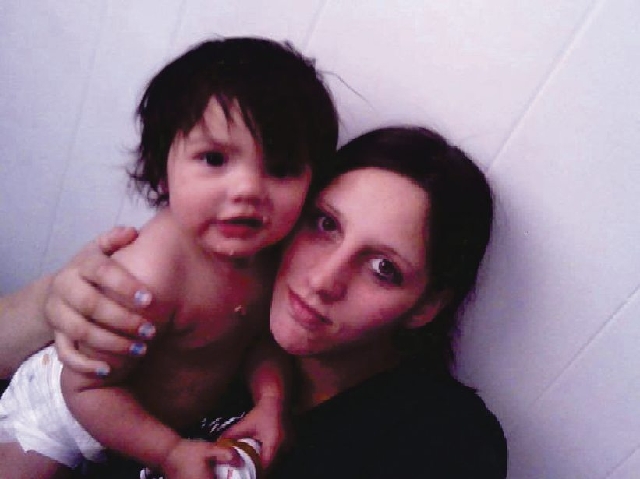 The ink on the fliers was barely dry when news came down that 19-year-old Harley Hamilton’s fight for life ended on June 26.

The community had been set to hold a $5 a plate dinner at the Stagestop Casino last Sunday to raise money to cover medical costs, when the sad news of her death changed the benefit to a celebration of life.

Family and friends were devastated, even if that gnawing feeling that the end was near bubbled just beneath the surface. Harley had come home last week to be with family. Doctors told the family there was nothing more they could do.

She came home to see her two daughters, ages 2 and 15 months for the last time.

Harley lost her fight with leukemia after being diagnosed with the illness just 15 months ago. Harley is the daughter of Lisa Hamilton and her stepfather Ted.

Harley learned she had leukemia after her second pregnancy. A routine blood test told doctors she was sick.

She was a fighter and stayed in Las Vegas most of the time to battle the disease. While sick, she did whatever she could to help her family cover her medical expenses and the needs of her children.

Before she passed away, Harley had started her own website, www.gofundme.com/1ftzws. The site only raised $1,100.

But soon, as word slowly leaked out that there was a young woman with young children fighting for her life, more people got together to help.

Tim Taylor, a cook at Stagestop, was one of them. He volunteered to help the family.

Taylor said he met Harley’s stepfather many times in the bar and wanted to do something. He said the benefit was the first one he helped organize.

“I told Ted I would do my best because it struck home. I have daughters, too. We try to do a lot of benefits, and the amazing thing is when people are in need, people come together,” Taylor said.

Another person people turn to when news needs to get out in the valley is Stephanie Lopez, creator of Positive Pahrump. She has a popular Facebook page, Positive Pahrump, and seems to organize people easily. She knew the owners of the Stagestop, Erin and Shawn Holmes. They passed on the flier to her about the benefit.

“My heart is broken for the family, they have two little babies. The bottom line is the two kids need our help,” Lopez said.

Harley was gone, but the spirit of the community rallied around the young lady and focused on her children left behind.

Other people rallied around the cause too. The owner of the Sweet Corner, Wendy Thompson-King, knew Harley’s aunt, but never met Harley.

King saw the post on Positive Pahrump and ran with it. Harley’s fight for life and her children stirred her heart and she turned to her vast network of church friends in the area to get the word out.

“It just really touched me,” she said. “This woman is only 19 and has two kids and the Stagestop was doing a $5 a plate fundraiser. I figured I would just let my people know from my network.”

The Stagestop celebration for Harley took in over $800 for the family.

“We sold over 35 dinners, the place was packed. People were buying the dinner for themselves but paying with a $20 bill and putting the rest to Harley,” Taylor said.

Billie Foy, a close friend of Harley’s, said he will miss his friend. He said even though her body might be gone, her spirit will always remain.

“Harley was one of the girls that could be a tomboy at one moment and then turn around and be a girlie-girl the next. Harley loved the outdoors. She loved to fish, hunt and hike. Her spirits were well. She said that if they could get her better it would be great, but if they couldn’t the time she spent with her kids and family was all she wanted. She lived life to the fullest all the way to the end,” Foy said tearfully.

Taylor said there is a collection jar at the Stagestop still. Harley had medical bills and her mother still has children of her own living at home in addition to Harley’s young girls.

On her site Harley’s zest for life comes out in her own words two months after she was diagnosed:

“As all of you all know, I was diagnosed with Acute Lymphoblastic Leukemia about two months ago. Although this will be a long and tough road, I will beat this. I have an amazing support system that will be with me every step of the way. Thank you to everyone who has stuck by my family and me throughout this journey and I pray you all continue to. We love all of you so very much.”