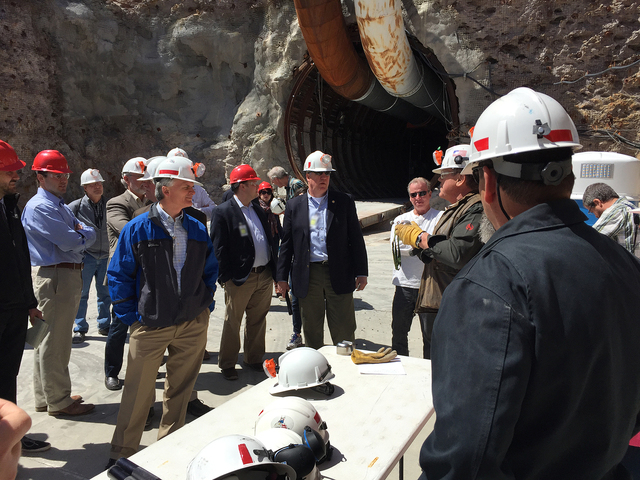 Republican Rep. Joe Heck and Democratic Rep. Dina Titus took slightly different approaches. But both bids to remove or divert $150 million in Yucca funds from a 2016 Department of Energy spending bill were killed by voice vote.

The development came as little surprise. The Nevada nuclear waste site historically has enjoyed 3-to-1 support in the House apart from Silver State lawmakers and no more than a hundred or so environmentally-minded allies.

With that in mind, Heck and Titus individually decided not to insist on roll call votes for their amendments.

“We know where it’s going to go,” Heck said of a vote. “To have everybody come and vote on it … the goal is to continue pushing the issue.”

“Now that the politics has changed a little on the other side (of the Capitol), we didn’t want to give them anything they could use as ammunition against us.”

Heck proposed to shift $150 million earmarked for Yucca into university research on methods that decrease the radiotoxicity of nuclear waste “so you don’t have to worry about putting it in the ground for 10,000 years.”

The Titus amendment would have just stripped out the $150 million entirely.

“No community should have to face what we in Nevada have had to face the past few decades of having this pushed down our throats,” she said.

With the amendments falling short, the House was on schedule to pass an energy and water project spending bill on Friday containing $150 million in Department of Energy funding for Yucca, and another $25 million for the Nuclear Regulatory Commission to move forward on licensing the proposed nuclear waste site.

Both sums are fractions of what would ultimately be needed to make substantial progress on the Yucca program. NRC officials have said they would need $330 million to complete a licensing process.

Building and opening a nuclear waste repository in Nevada would cost close to $100 billion, according to government estimates before the project was terminated in 2010 by President Barack Obama. Even if Congress passes new money for Yucca Mountain, it is unlikely that DOE under Obama would spend it.

The energy and water bill now shifts to the Senate, where Republican leaders have shown a new willingness to consider Yucca Mountain funding, in part to test the remaining clout of Sen. Harry Reid, D-Nev., who has announced he is retiring at the end of 2016.

On the House floor, Heck argued the idea of burying nuclear waste in the ground in Nevada is outdated, and there should be more research on other methods of handling the material.

Titus took aim at $5 million in the bill for Nye County, whose leaders are eager to see a Yucca repository up and running if it could be found safe.

“This simply creates a slush fund to pay off local governments in return for their support of this failed project,” she said.

Rep Mike Simpson, R-Idaho, chairman of the House energy and water subcommittee, swatted away the Nevadans.

“Yucca Mountain remains the law of the land,” Simpson said, designated by Congress in 2002 and terminated by Obama to fulfill a political deal to gain Nevada electoral votes in 2008 despite $15 billion already spent on decades of study.

Despite their numerical advantage, pro-Yucca interests left nothing to chance Thursday.

Shortly before the debate, the Nuclear Energy Institute circulated a notice on Capitol Hill urging lawmakers in capital letters to “OPPOSE TITUS AMENDMENTS OR ANY EFFORT TO KILL THE YUCCA MOUNTAIN PROGRAM.”