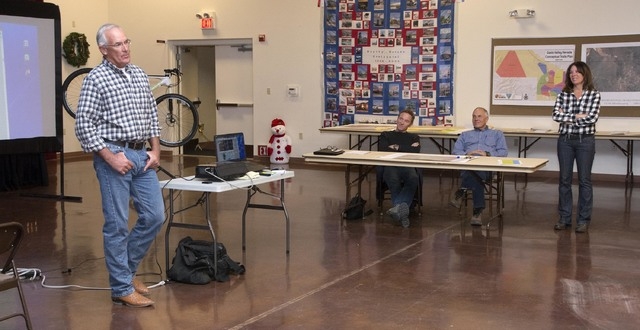 The development of a mountain biking trail complex around Beatty took another step forward Dec. 16 as STORM-OV held what was billed as a “scoping meeting and feasibility launch.”

Beatty residents and other interested parties participated in a field study, touring targeted sites for initial trail development and participating in a workshop in the evening.

With limited time, the group visited sites around Beatty and Rhyolite, including the former Barrick Bullfrog mine site. Two representatives of Barrick were on hand for both the field study and the workshop, and there was indication that one trail might provide a view of the mine’s main pit.

Attendees included representatives from Nye County Planning, the National Park Service, the Bureau of Land Management and the USDA, among others.

STORM-OV stands for “Saving the Toad through Off-road racing, Ranching, and Mining.” It is a non-profit organization formed to promote the development and preservation of Amargosa toad habitat through responsible multiple use of land.

Organization founder David Spicer hosted the event and fielded questions from the audience along with consultant Cimarron Chacon of Go-Promotions, of St. George, Utah.

Spicer has hosted a variety of events on his ranch and on properties he holds as part of his rock business. These include Tough Mudder competitions and motocross and rock crawling events. In February his ranch will also host thousands of boy scouts for a mountain man event. He has also facilitated the Vegas to Reno off-road race in the Beatty area.

An avid mountain biker, Spicer, a life-long Beatty resident, holds membership in a number of mountain biking and outdoor recreation organizations, and he says excitement is running high in that community for the development of a trail system at Beatty. Chacon said that attendees at a recent event in St. George, Utah were already talking about the development of trails in Beatty.

Spicer said the trails would be professionally built, and that such trails are generally safer and more interesting than rider-built trails. “We are going to build the best trails we can build to bring users here,” he said.

Asked whether the mountain bike trail system would mesh with the trail system planned by the Beatty Habitat Committee, Spicer replied, “absolutely.”

Concerns about motorcyclists using the bike trails were addressed. Spicer, Chacon, and others said this could be taken care of by signage and trail design.

Beatty Town Advisory Board treasurer Erika Gerling said her main concern was “connectivity.” She wanted assurance that the trails would connect with the town to bring visitors in.

Gerling also said that, while events are nice, what is needed is something that brings visitors in on a daily, year-round basis.

Spicer said that the trails would bring people year-round, not just for events, but events help get the word out and advertise your town. “You want an event that is your own,” said Chacon. “Think of it as your promotion.”

They said that a lot of information has been gathered about mountain biking enthusiasts and on their economic impact on places they visit. Spicer said that the average yearly income among mountain bike riders is over $80,000. He characterized them as “complicated people” who “like it rough.”

Part of that roughness evidently is shown in their preference in accommodations, Some will stay in a hotel or motel if it is “bike friendly,” meaning that there are facilities available for washing their bikes because they get dirty on the trails. They also need a secure place to store them or to be allowed to keep them in their rooms. This is important because their bikes usually are worth several thousand dollars.

Many prefer to camp out, and it is good to have locations available for them to do that. Someone commented that “what they don’t spend in lodging they spend on food and eat well.”

Brad Hunt said he has attended a number of mountain bike events with Spicer, and he found that the bikers tend to come to a place a day or so before a race to check out the trails and to stay a day or two after to explore the trails.

Chacon said that the desert environment makes it easier to maintain a trail system. “Once you build a trail in the desert, maintenance is little to none.”

At the end of the workshop, participants were encouraged to sit down with maps and mark out locations for possible trails.

Although the trails, when built, will not use existing roads, organizers also plan to invite mountain bikers to come ride the dirt roads in the area and make their own recommendations for trails.

BLM Tonopah Office Field Manager Tim Coward noted that residents might want to do a little sprucing up of the desert before inviting people.

“When we were out we saw washing machines where surely no one did laundry and TV’s where no one could watch TV,” he said.

Resident Wendy Wilson said she had participated on other clean-up projects and that there were people and trucks available.

“There is a lot of existing traffic in the area that isn’t coming here,” Spicer said. “We need to give them a reason to come here. This can be a destination of its own.”