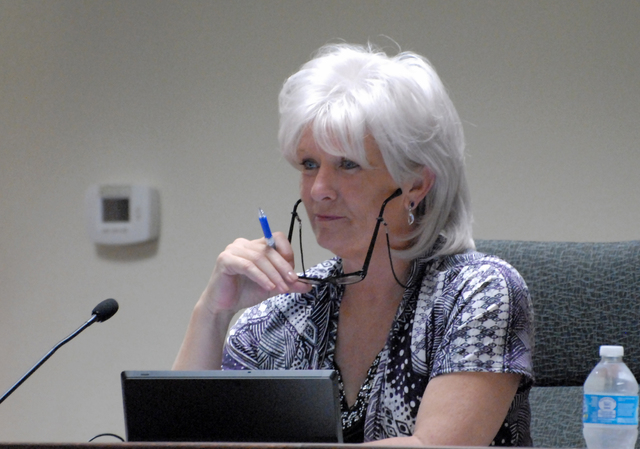 BEATTY — “Nevadans know how to manage Nevada lands. We are the best stewards of that land.”

Those statements sum up the sentiments expressed by Commissioner Lorinda Wichman on the possibility of the state assuming the management role currently performed by the federal Bureau of Land Management.

The Nevada Land Management Task Force, of which Wichman is a member, is due to submit its report to the state legislature in September. Wichman said that when she first got involved in the program that it would simply be a source of publicity, but she now feels it is much more, “though there is nothing wrong with publicity.”

The commissioner hosted a workshop with the Beatty Town Advisory board before its July 14 meeting to explain the proposal and answer questions. Most of the questions from audience members concerned how such a transfer would affect enforcement of federal laws, which would still apply, and how the state would fund its new management responsibilities.

Wichman said that initial funding would come from the sale of lands already designated for disposal and from grazing fees. She claimed that ranchers who were asked said they would be happy to pay higher grazing fees if the money were going to the state, not the federal government.

She also mentioned the possibility that the state could put some of the responsibility to the counties, saying that some counties which do not contain much public land were “fine with that.”

The possibility of the county assuming the burden of managing public lands worried board treasurer Erika Gerling. “As a county,” she said, “I don’t think we’re in any financial condition to manage anything.”

The task force’s report is available for viewing online at nvnaco.org.

In its regular meeting, the board dealt with the question of what to do about the failure of the Atomic Inn to remit room tax money to the county. The business, which has a history of delinquency, is several months in arrears on these payments. The deadline for its license renewal apparently passed without the license being renewed, making it illegal for it to rent rooms.

The board opted for a step-by-step approach, starting with a letter to the owners, the district attorney, and county treasurer informing them of the violation and its possible consequences. Depending on the response, they plan to take further action at a future meeting.

The board will approach the Beatty General Improvement District about using their employees to do some of the work in developing the Town Square/ Robert A. and Florence Revert Park. They plan to pay the employees’ wages when they are doing the work.

Albert Verilli told the board that “some of the work you authorized” in cleaning up part of the Amargosa River bed has caused a build up of silt and change in the channel, which is causing damage to the road into his mobile home park. He will have the matter agendized for the board’s next meeting to seek a solution.

Jim Pitts, who has done some restoration work on historical structures in Beatty, suggested that there should be signs identifying the Amargosa River on the bridges next to Beatty. He said that he has always found wherever he has traveled that there are usually such signs for the benefit of travelers.

Board member Crystal Taylor, speaking during the public comment segment, said that the Happy Burro will be holding its 6th annual volunteer appreciation day August 9. Proceeds from that event are split between the volunteer fire department and the ambulance service.