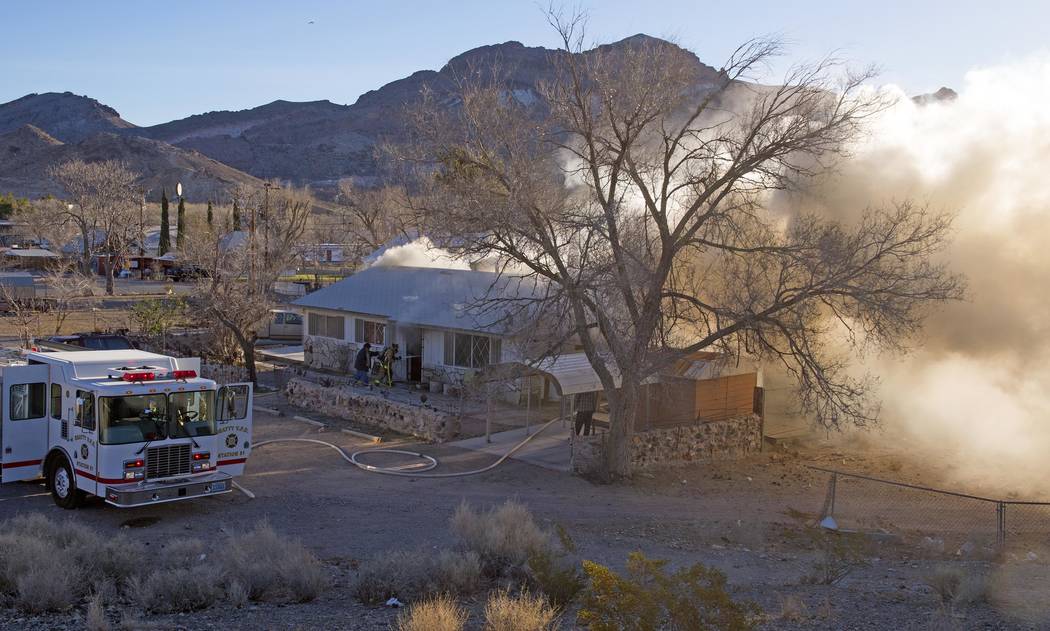 Richard Stephens/Special top the Pahrump valley Times The fire was evidently was started by old, faulty wiring and burned mostly in the attic area and completely destroyed the roof, rafters and trusses. Contractor friends have told her that it would be more expensive to repair the house than to tear it down and build a new one.

Beatty Town Advisory Board member Crystal Taylor was at work shortly before 8 a.m., Thursday, Feb. 8, when she got word that her house was on fire.

Taylor said her first thought was for her daughters, Summer, age 17, and Danielle, age 11. She was relieved to learn that the girls had left for school before the fire broke out.

The fire, which evidently was started by old, faulty electrical wiring, burned mostly in the attic area and completely destroyed the roof, rafters and trusses. The contents of the home were heavily damaged by heat and smoke, and by water used to fight the fire.

Taylor can hardly talk about the fire without crying. Contractor friends have told her that it would be more expensive to repair the house than to tear it down and build a new one. The house and the destroyed contents represent years of work by Taylor, who says she came to Beatty with little more than the clothes on her back.

She has been repaying the person who gave her the money to buy the house, but the informality of the transaction also meant that she had no insurance.

“The community has been fantastic,” says Taylor, who is staying with a friend, while her daughters are staying with her parents, Fred and Patty Summers (Beatty’s Santa and Mrs. Claus).

That community support most recently included a spaghetti dinner and raffle held at the Beatty Community Center Feb. 15. The event, sponsored by the Beatty High School Student Council, Honor Society, and FCCLA, and by the Beatty Volunteer Fire Department, Volunteer Ambulance Service and Nye County Emergency Management, raised over $2,000 for the family.

Taylor is considering any options she can think of, including possibly applying to Habitat for Humanity. She says she is sure there would be plenty of volunteer labor from the Beatty community.