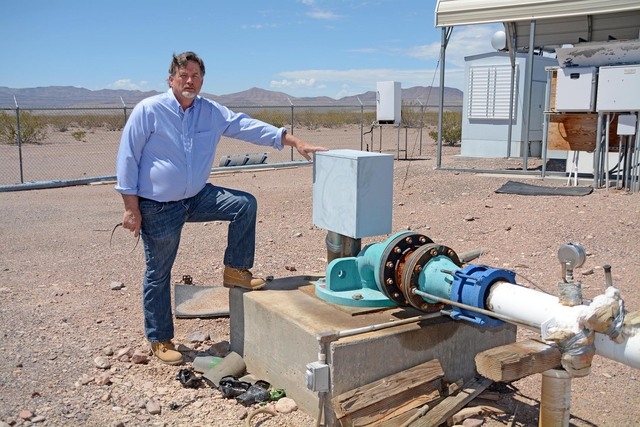 Unknown to most residents, Beatty faced a water crisis when the town’s biggest well went down on July 4.

If older wells were put back into quick service, Beatty would have had only an estimated 24-hour supply on hand.

Beatty Water and Sanitation District pulled the electric meters from the oldest wells located by the town park to save the monthly minimum hook-up fees. Fortunately, Valley Electric was able to restore the meters in time to have the wells up and running before residents faced a moratorium on water usage.

The water in these wells, which was used by the town for many years, contains hydrogen sulfide gas, which gives it a “rotten egg” smell. District Manager Rob Shirley says, however, that the wells tested clear of coliform bacteria, and the water is safe to drink.

The well that went down, designated EW4, was put back in service just over a year ago after a lengthy outage to replace its pump and casing. Originally drilled for the Barrick Bullfrog Mine, the well is 1,500 feet deep. It originally had a vertical turbine pump, but when that pump went out a couple of years ago, it was replaced by a submersible model.

Shirley says that the pump will be pulled and inspected “in order to know what happened so it doesn’t happen again.” One theory in his mind is that the pump was cycling off and on too quickly, not allowing for cool-down time.

Two companies with cranes sufficient to pull the pump are in the process of producing quotes for the job and determining when they might be able to do it. Both are very busy right now, says Shirley.

The manager, who has 30 years of experience, working most recently as a circuit rider for the California Rural Water Association, has been on the job in Beatty for about a month. The district faces a host of mechanical, managerial, financial, and regulatory challenges, but Shirley says he enjoys “fixing things.” He appears to have the training and temperament to handle the job.

“I’m 60 years old, and I figure I’ve got five good years left in me,” he says. He says that health and public safety and finances are the first priorities in tackling the district’s problems.